The 1994 San Marino Grand Prix marked not only one of Formula 1’s darkest weekends, but proved to be a turning point in car safety that would change the sport forever.

Imola was just the third round of the championship, and there had already been numerous high profile accidents in testing and racing before the deaths of Roland Ratzenberger and Ayrton Senna prompted a radical overhaul in the approach to driver protection. 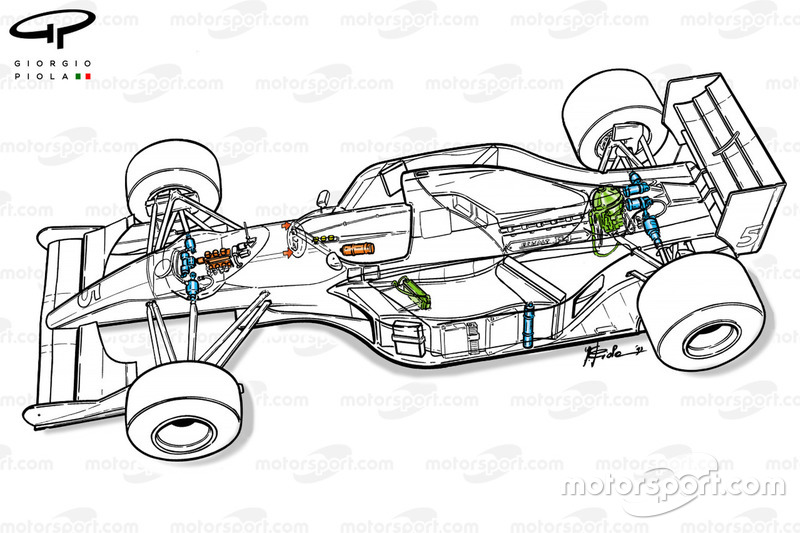 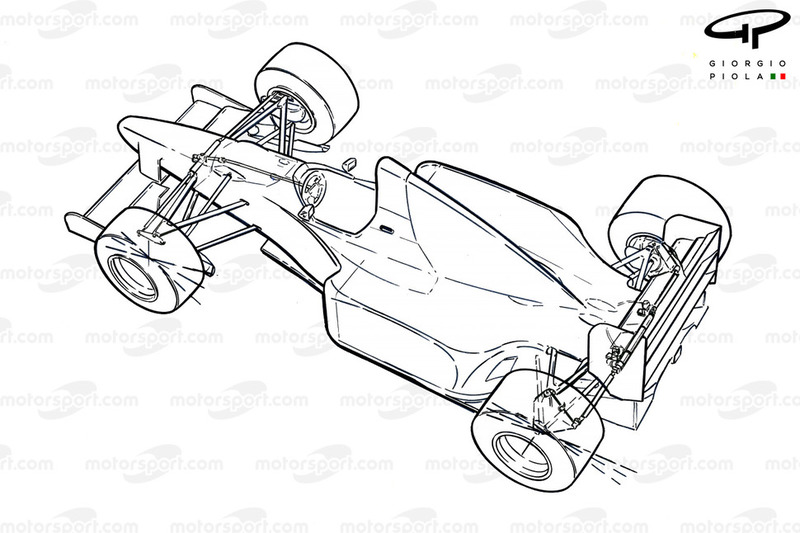 Heading in to the 1994 season there had been a big rule change, which had not only set about reducing costs and handing back control to the drivers. It had also attempted to reign in teams in their adventurous use of electronic control systems.

Williams had ruled the roost in the previous few seasons, with its active suspension a considerable factor in its title winning seasons. However, other electronic aids, such as ABS and traction control had started to become more commonplace too, whilst solutions like rear wheel steer and CVT (Continuous Variable Transmission) had been tested but not raced.

All of these were to be banned for ‘94 and would have a serious impact on the behaviour of the cars, both from an aerodynamic and mechanical point of view.

The reaction to the events at Imola from the sport's governing body was swift though, as by the Spanish GP, just two races later, the teams were forced to change the design of their front wing endplates and the length of the diffuser, as a way of reducing downforce and slowing the cars.

Click on the arrows in the images below to reveal 10 further changes that resulted in improved driver safety... 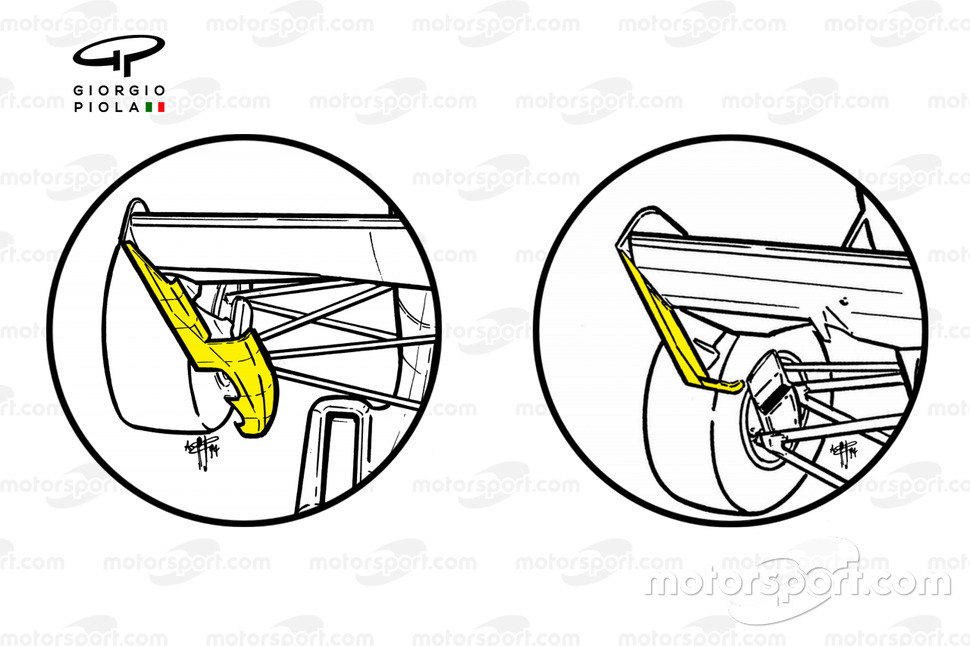 1/10
The long skirt-style endplate designs that had populated the grid in recent years were outlawed (left), as seen here on the Benetton B194. 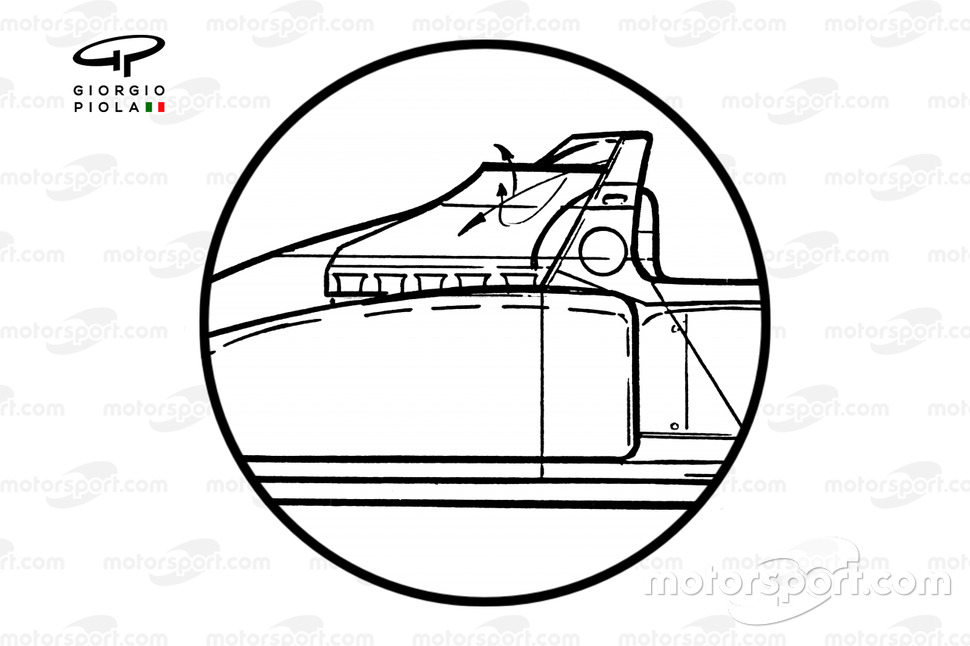 2/10
This was followed just a race later by holes needing to be cut into the airbox or engine cover to reduce airflow to the engine, reducing power. 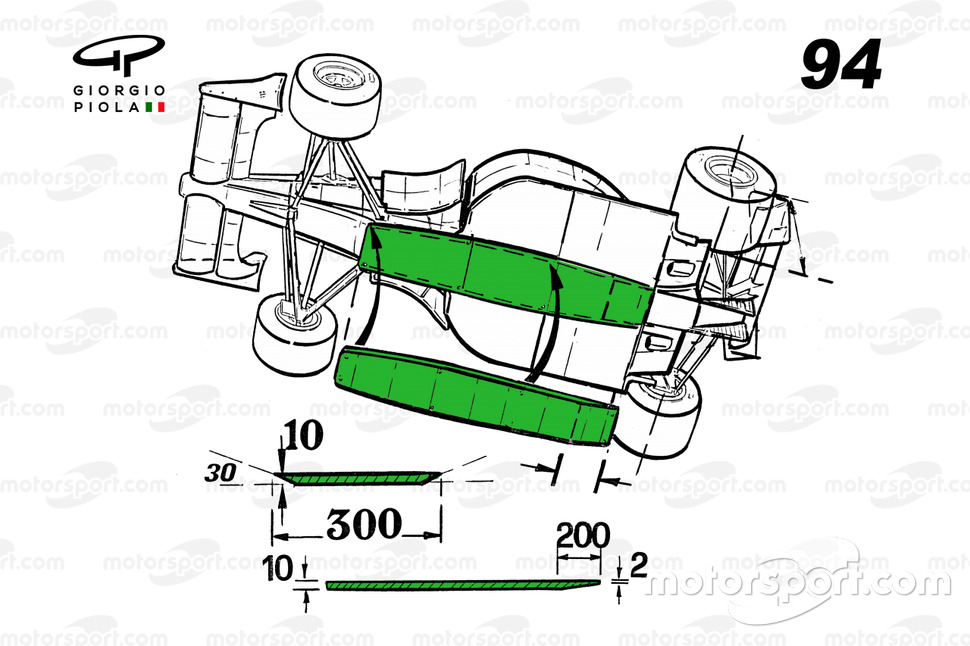 3/10
By the time the German GP came around in July, teams had further design constraints to comply with. The most important of these, and something that still exists today, was the need to have a plank installed on the floor. This was done as a method of controlling the ride height, as the plank could not be worn by more than 1mm during the course of a race.

4/10
Famously this led to the disqualification of Michael Schumacher's Benetton at the Belgian GP. The German's plank had been worn away at the front by more than the 1mm tolerance, resulting in him being stripped of his race victory. 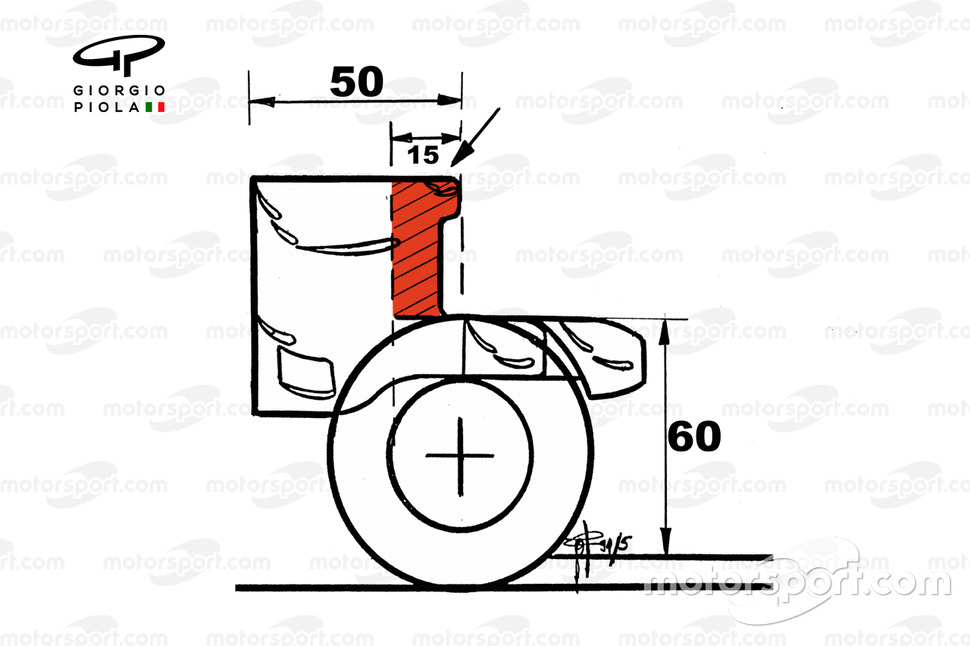 5/10
The rear wing dimensions were also constrained, with an exclusion zone created 150mm behind the rear axle line, effectively outlawing the practice of using pre-wings. The changes came in for criticism from all corners on the grid, as whilst the teams understood the need for change, in order to improve safety, they'd been rushed, and in some circumstances put unnecessary stress and strain on other components. The push for increased safety continued for 1995, as the governing body made even more rule changes, including an increase in load testing, further changes to the cockpit dimensions, a reduction in engine capacity (3.5 > 3.0 litre) and comprehensive changes that affected aerodynamics. 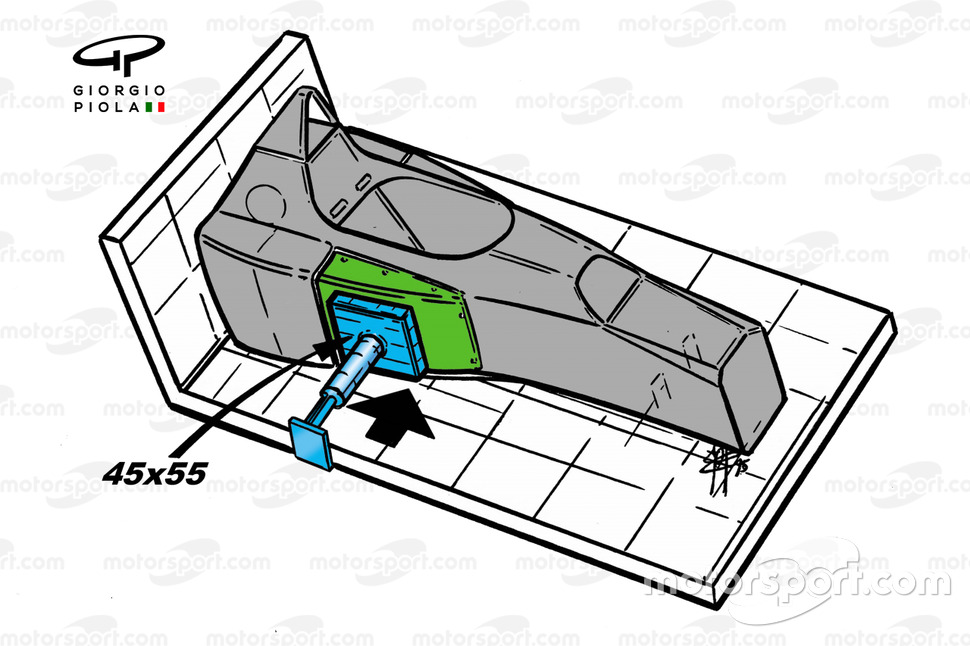 6/10
The load and impact tests already undertaken had their speeds and loads increased, whilst a new side impact test was introduced. 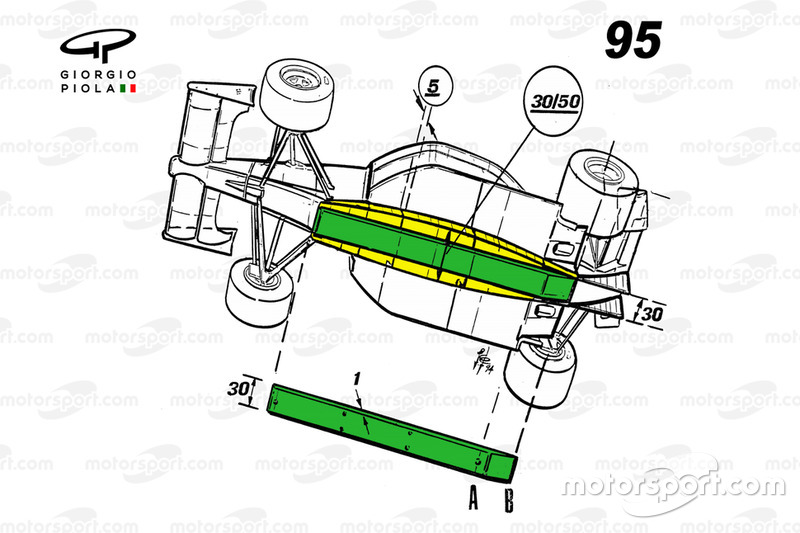 7/10
The introduction of the plank in 1994 had only gone so far as to limit the downforce created by the flat bottoms first introduced in 1983. As such, a step plane had been created, which lifted the outer portions of the floor by a further 25mm, reducing the potential yield of the floor. 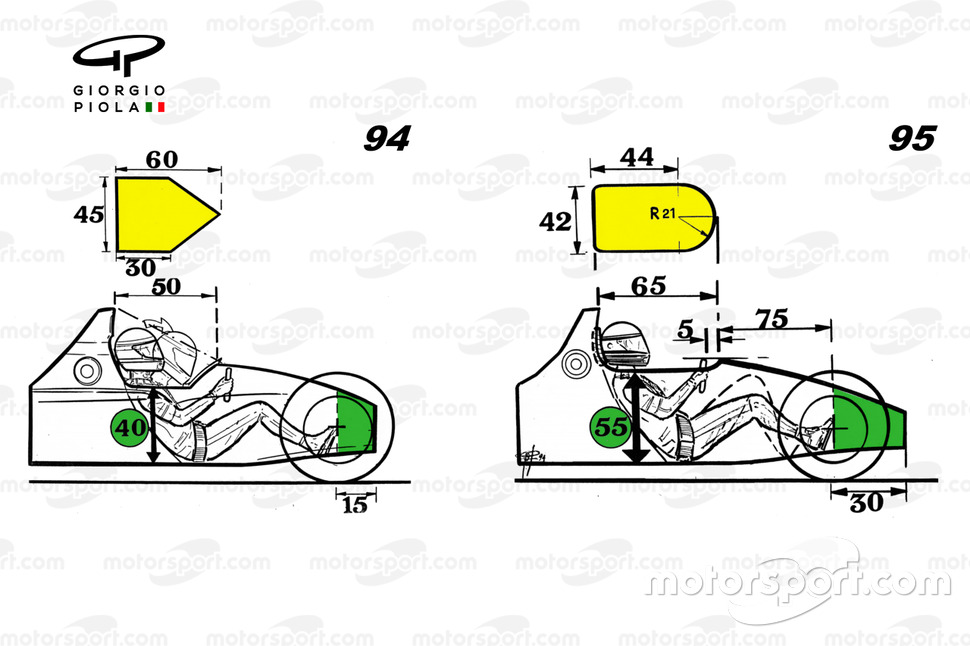 8/10
Dramatic changes were made to the cockpit, with its dimensions altered to reduce the chance of incursion by debris. The length of the monocoque was extended by a further 150mm in front of the axle line, improving the crush zone ahead of the driver's feet, which now also had more space given the extension between the front axle line and the cockpit rim. The cockpit sides were drawn up higher (400>550mm) to better protect in the event of a side-on incident. The cockpit template was narrowed slightly (450>420mm) but extended forward and given a much larger radius. 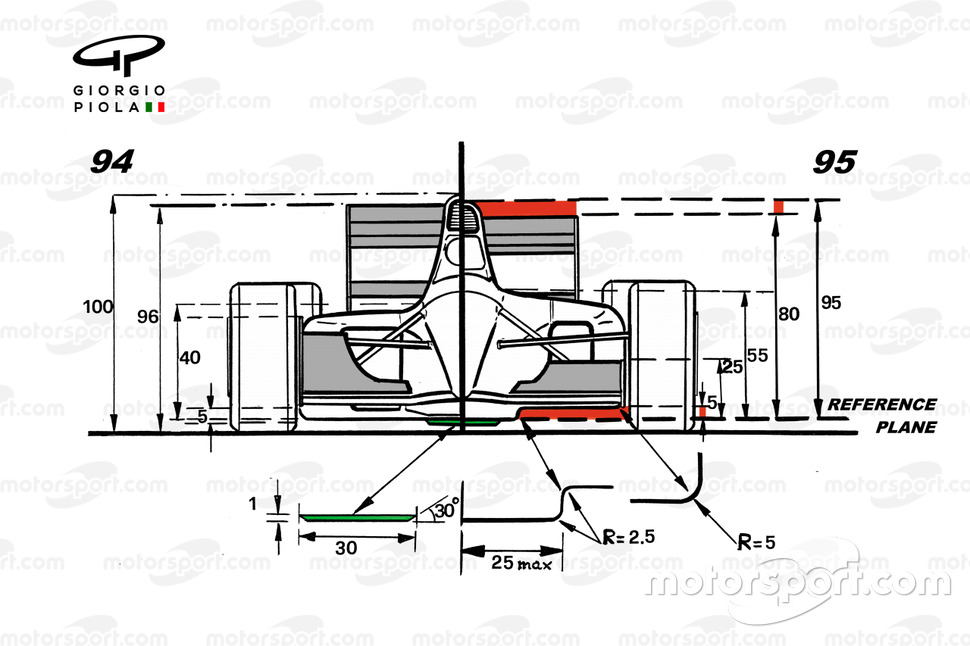 9/10
The car's aerodynamics were impacted by changes to the front wing endplate height, a reduction in the overall height of the car and a lower rear wing. This view also shows how much of an implication raising the cockpit sides and impact structures had on the design of the sidepods. 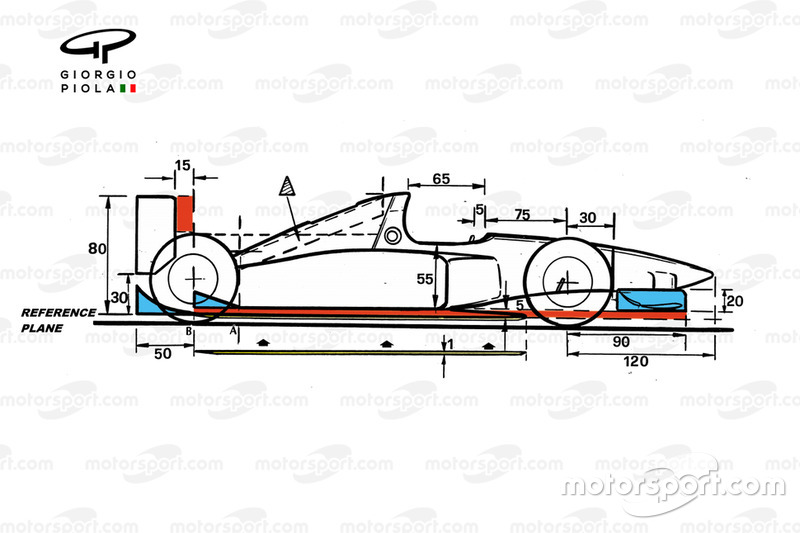 10/10
The side view shows the impact on the dimensions of the car, with the wheelbase inevitably increasing to incorporate the safety structures. Meanwhile, you can see the dimensional implications on the front and rear wing endplates.

Portuguese GP qualifying as it happened