Strategy Report: How disruption turned Austrian GP on its head

Disruption is everywhere in the modern world, few can escape it. It has always been true of Formula 1, where technological innovation plays such a vital part in success.

But we also find disruption in the race strategies. A race that seemed under control can be turned on its head by a Safety Car or a Virtual Safety Car and the challenge is disrupted.

F1 team race strategists have experienced most scenarios and it all comes down to calculation and appetite for risk. Teams that are used to winning, like Mercedes in the current formula, have a low appetite for risk. Whereas challenger teams like Red Bull love to take risks, especially when they don’t clearly have a fast enough car to win under normal circumstances.

A Virtual Safety Car disrupted the Austrian GP – five of the teams decided to leave a car out: Mercedes, Force India, Williams, Toro Rosso and Haas. Half the field got it right and half got it wrong… 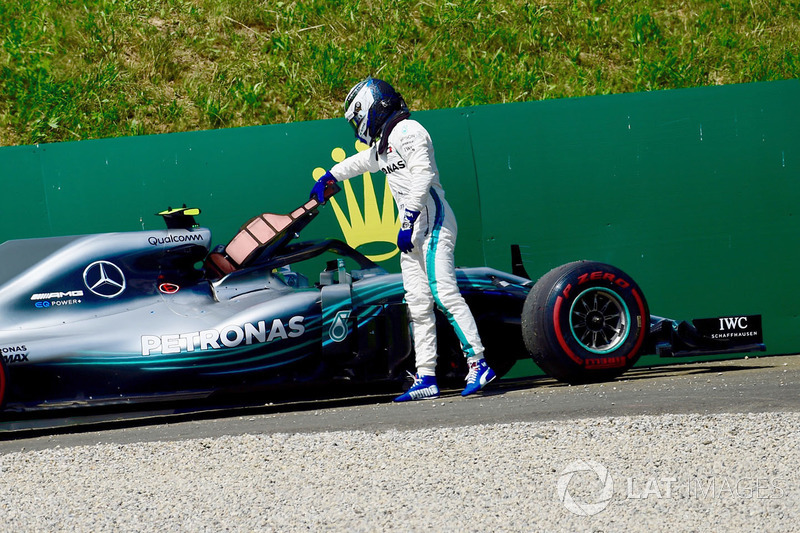 The Virtual Safety Car was introduced after the accident of Jules Bianchi at Suzuka in 2014 and has played an influential role in the outcome of a number of races since.

Whereas the Safety Car bunches the field up and race strategists know that it will be out on track for several laps, so they can plan, a Virtual Safety Car is a more fleeting disruption.

The strategists have to second-guess not only how long the Race Director is going to keep the VSC active for, but also whether the incident in question is severe enough to warrant a switch to a full Safety Car. We have seen a number of those in the last few years.

Another famous occasion for Mercedes was Monaco 2015 when they lost track of time intervals as a Virtual Safety Car became a Safety Car and Lewis Hamilton lost the lead to his teammate in the pits.

But the challenge with the VSC is that there is no way of knowing when it will end. There is no warning from Race Control, as there is with a full Safety Car. And the worst thing you can do is find yourself coming into the pit lane just as a VSC ends. As you will lose time and many track positions.

In the case of Sunday’s Austrian Grand Prix, Valtteri Bottas’ Mercedes suffered a sudden loss of hydraulic pressure on Lap 14 and pulled off the race track. This brought out the VSC while the marshals cleared the car. 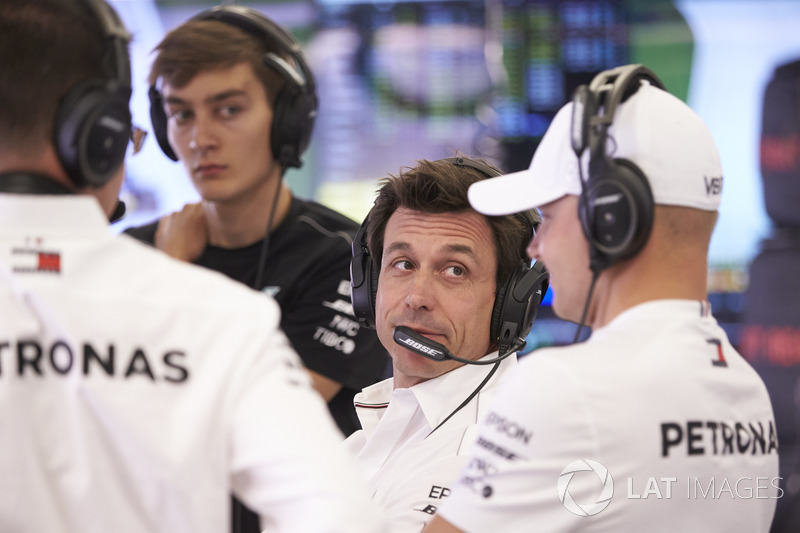 Some strategists took the view that the VSC would be short-lived, others dived on the opportunity of a cheaper pitstop, saving around 9 to 10 seconds compared to a stop at racing speeds.

There was plenty of time to react as the leader Lewis Hamilton was only approaching Turn 6 at the moment when the VSC was deployed, even more time for Max Verstappen, Kimi Raikkonen, Daniel Ricciardo and Sebastian Vettel who were trailing in his wake. Verstappen was five seconds behind the Mercedes. 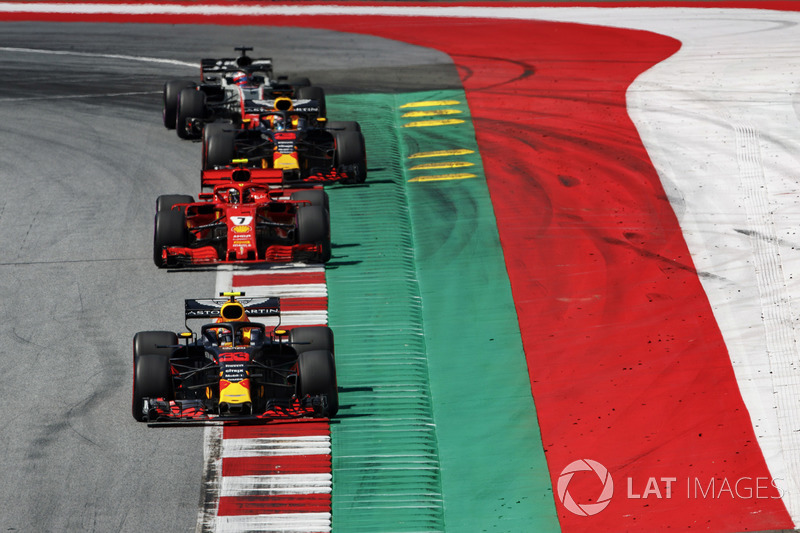 In situations like this the gamble is how long the VSC will be out, but there was a clarification from Race Director Charlie Whiting that the VSC would always be out for at least one lap.

This took away the chance that a shorter deployment could create a lottery which massively advantaged one or two teams who happened to be in the right place at the right time.

The thinking of the strategists is often to do the opposite of the car they are racing against. In this case, if Hamilton had pitted, Red Bull might have split strategies, leaving Verstappen out to gain the track position and pitting Ricciardo.

Ferrari had a fast enough car to race for the win, but having lost out in qualifying with Vettel and at the start with Raikkonen, they were focussed on beating Red Bull.

The VSC came at a horrible moment in the race; it was too early to pit, as the race was set to be a one-stopper with the original target stop lap being between laps 20-28 to switch to soft tyres, for the Mercedes and Red Bulls using supersoft tyres for the first stint. 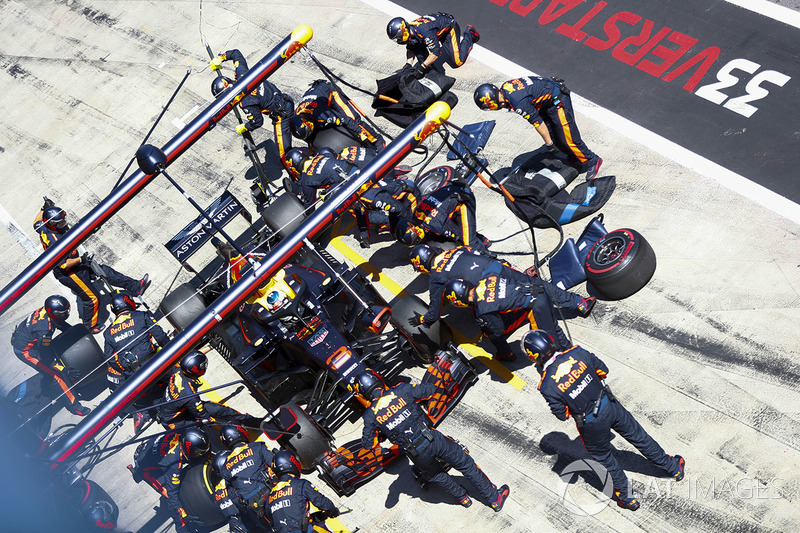 The limitation was tyre graining and especially the left rear, as the track’s predominantly right-hand turns give lateral stress to that particular tyre. It was much hotter than during practice, which made it more of a tyre management exercise than anticipated.

For the Sauber team that had started Marcus Ericsson on soft tyres, it guaranteed that they would score points as the soft tyre was the only tyre you could stay out on with confidence that you could push after the race went live again. When strategists with cars down the back of the field go for a reverse strategy (starting on hardest tyres) it is precisely for this scenario that they are gambling. 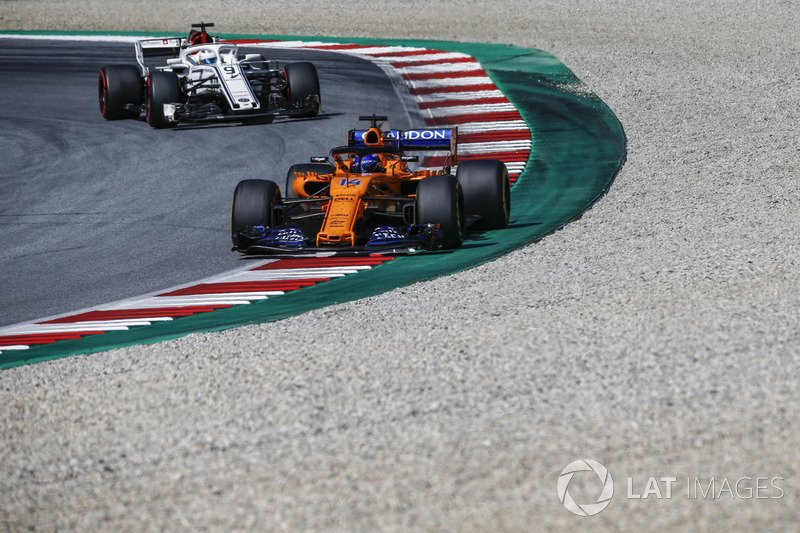 Fernando Alonso did well to finish eighth having started from the pit lane, but imagine how much further up the field he might have finished had he started on soft tyres given the way the VSC turned out.

On the Mercedes pit wall, there was discussion on what to do. The final decision in that team lies with James Vowles, who does the strategy for both cars. Over the last five years he has had to think in stereo on many occasions, but now there was only Hamilton’s race to consider.

But in this case, the clock ran down for Mercedes and it missed the opportunity. Hamilton started a new lap and the four cars behind him all stopped. Other teams did the same thing, but the Mercedes example was the most high profile.

The calculation was whether Hamilton could pull out over eight seconds on Verstappen on worn supersoft tyres, against the new softs on Verstappen’s car.

Red Bull and Ferrari were fully committed to stopping; so much so that they pitted both cars, which cost the tail car in each case – Vettel and Ricciardo – three additional seconds of race time. To do that they had to prepare two sets of tyres in double quick time, which Mercedes would be aware of as they deliberated. 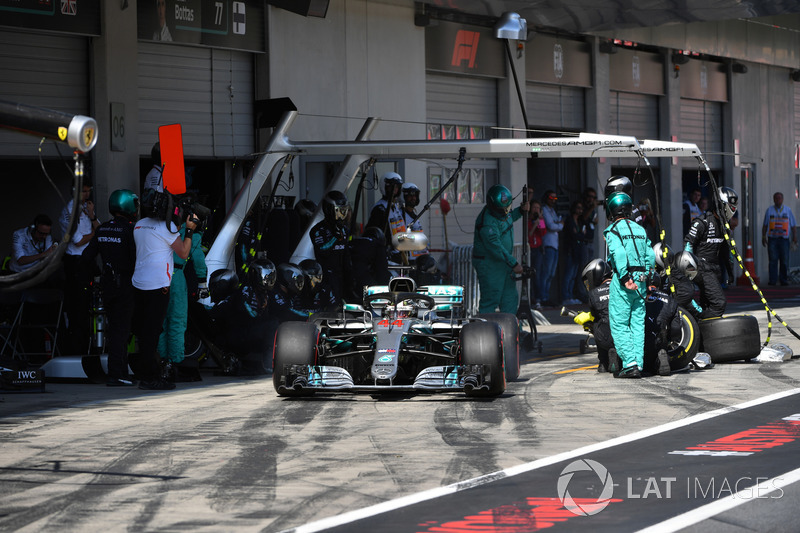 Hamilton didn’t have the pace on fading tyres to pull the gap and dropped to fourth at his stop on Lap 25. Ferrari missed a trick in not keeping Vettel safe to Hamilton, in other words getting him to speed up to maintain a pitstop gap to the Mercedes, which would have put Hamilton fifth after his stop.

They made up for it with another tactic which was to back Hamilton up into Vettel once the Mercedes caught Raikkonen, who had been overtaken by Ricciardo early in the second stint.

The higher temperatures on race day meant that the tyres were graining and the winning tactic was to look after them rather than to push, as Ricciardo did in his attack on Raikkonen. He was forced to make an extra pit stop. 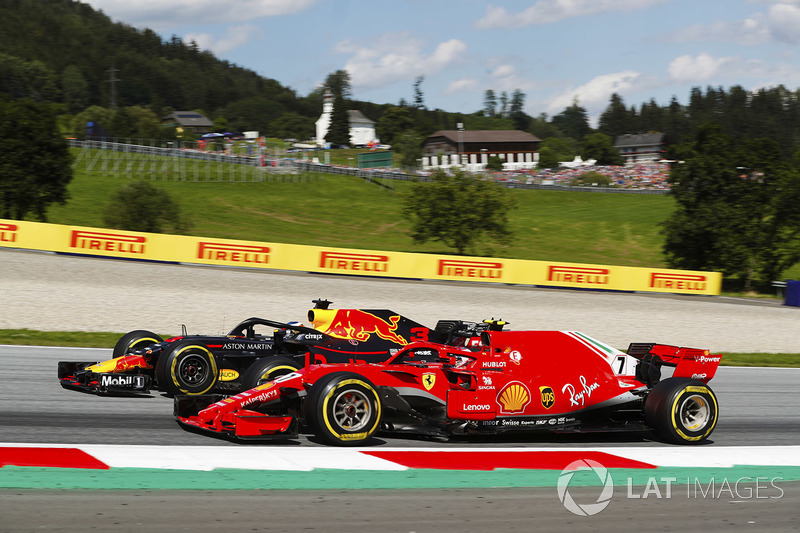 It is surprising that this happened in many ways, as there was clear indication from the damage sustained by the tyres from the first stint that it was vital to look after the second set to make the finish and that would have been communicated to the drivers. Verstappen certainly heeded it and it won him the race. But Ricciardo was in a racy mood.

In clear air at the front Verstappen was able to manage his tyres, as did the Ferraris, which had the best performance on the tyres at the weekend.

Vettel took the championship lead by one point, but it could have been more. If Ferrari had switched the cars around, Vettel would have gained another three points. 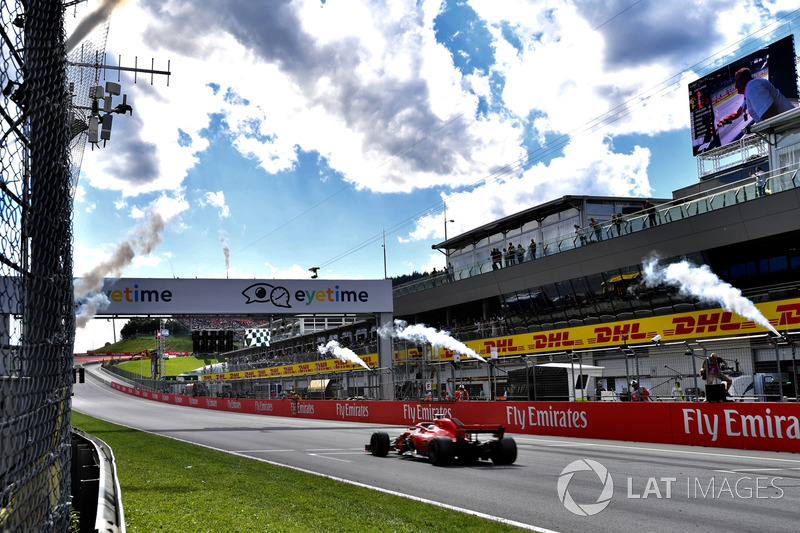 And if he had not blocked Sainz unnecessarily in qualifying, picking up a three-place grid penalty, he would have started in third place on ultrasoft tyres – ahead of Verstappen – and with Mercedes’ double technical retirement, he’d have scooped 25 points to Hamilton’s zero.

It's easy to say in hindsight, but one of the secrets of Michael Schumacher’s success at Ferrari was never giving anything away to the opposition, especially through unforced errors, of which we have seen a number from Vettel this year. 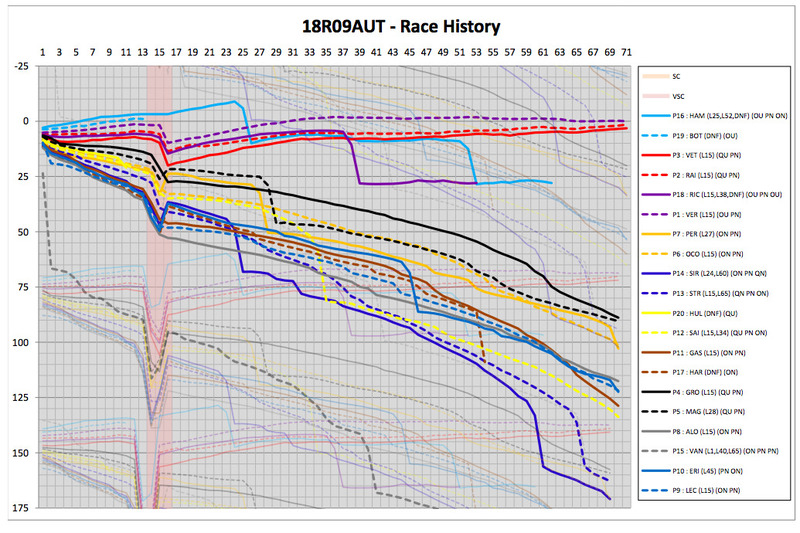 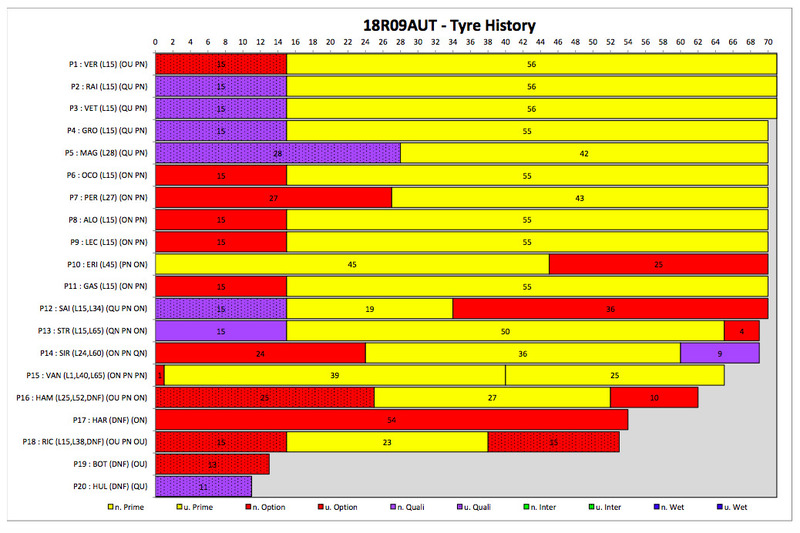