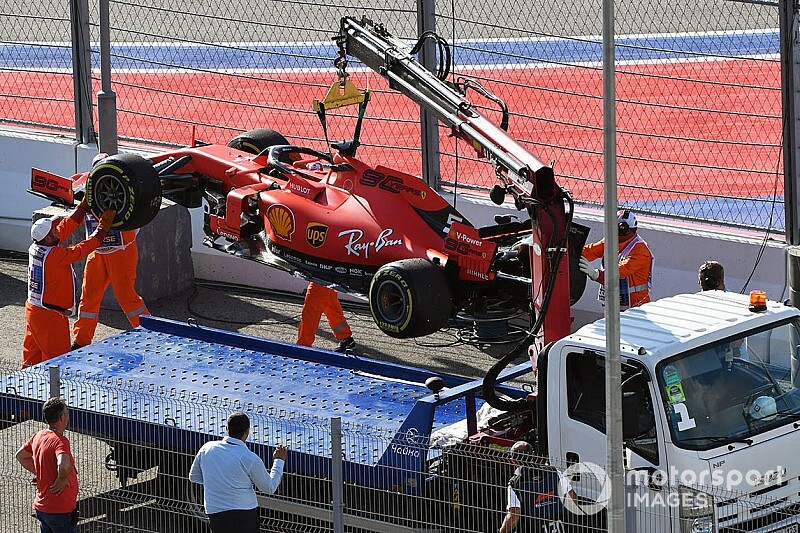 Sebastian Vettel says his frustrated radio message for Formula 1 to 'bring back the f***ing V12s' after his Russian GP retirement was borne of ongoing angst at the downside of the current turbo hybrid engines.

Vettel's hopes of a podium finish at Sochi on Sunday were dashed when the MGU-K on his car failed shortly after his pitstop.

With the team realising that continuing to race on risked damaging the engine, Vettel was ordered to stop his car immediately – which in doing so prompted a virtual safety car that cost teammate Charles Leclerc the win.

After being told to jump clear of his car, a disappointed Vettel came over the radio and said simply: "Bring back the f***ing V12s.'

Reflecting late on about whether the disappointment of the day had prompted him to reconsider staying in F1, Vettel said: "There's no series like Formula 1 with V12s, otherwise I would consider!

"But, no, I mean, obviously there's no option. These power units are very complex.

"I think from an engineering point of view, very fascinating, but obviously I have my stand on it, and I don't think it comes with a great upside for us racing, and people watching."

Vettel said that having been in contention for the win in Russia, despite the controversy surrounding the Ferrari team orders, the retirement had been very hard to accept.

"In that moment obviously it was very bitter, because up to that point I thought I drove very well, and it was looking like a good afternoon," he explained.

"Then obviously the first reaction when the car sort of breaks down is always not the happiest one."

Multi 21 revisited - and what Webber thinks of it now