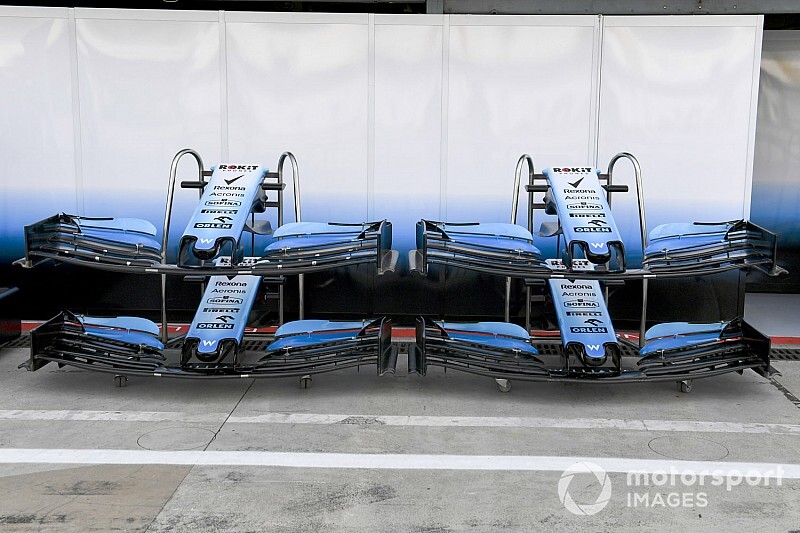 Williams is poised to trial an experimental front wing in practice for the Japanese Grand Prix as it assesses potential aerodynamic options for next year’s Formula 1 season.

The team had previously stated that the design of its 2020 car would be an evolution of this year’s FW42, before F1 evolves into a new ground-effect aero ruleset. At the start of this year’s ruleset, teams have opted for varying front wing philosophies, without the usual pattern of convergence seen in F1 aerodynamic development.

Described by senior race engineer Dave Robson as an “experiment”, the new wing is expected to look visually different, suggesting a change in Williams’ concept.

“Hopefully there will be a test front wing [in Suzuka] that should look a little bit different,” he said. “If we get it there, and we run it on the Friday, you’ll soon spot that. It’s kind of an experiment.

“It’s hard to know [what the best concept is], that’s part of the experiment; it’s interesting even now, when you look at the pitlane as the cars come out and there’s a couple of different distinct schools of thought in the front wing design. Even almost a year on, it’s not like everyone’s snapped to the same design, so there’s a few different ideas and concepts out there.

“It’s an experiment for us and we’ll see how it goes; hopefully it’ll correlate well with what we expect and use that as the basis going into next year. You’re still getting around doing the best job we can with the new rules to try and control the front tyre wake as it passes further down the back of the car.

“Everyone’s doing the same thing but in different ways, and that’s about getting that dirty air out of the way. It’s just another slightly different way of doing that.”

When asked by Motorsport.com if the new wing also has a chance of remaining on the car for the rest of the season, Robson hinted that it may do so if it delivers the results expected.

“It might do, but we’re not assuming that at the moment, it’s very much part of the R&D for next year at this stage,” he replied. “But we’ll see how it performs.”

So far in 2019, Williams’s developments of the front wing have been minimal, retaining the machete-shaped wing elements throughout the year. The team has updated its endplate through the year, opting for a smaller, more rectangular cutout in the upper trailing edge corner to assist with the direction of outwashing air.

Further updates for Williams appear to be in the pipeline for the rest of the year, although it is currently unknown what these consist of.
“There’s a few more bits and pieces,” said Robson, when asked further upgrade plans. “Some things that might stay on the car for the rest of the season if they’re better, other things that are just more R&D-type work and finalising the aero plans for next year - and checking correlation back to the tunnel again.”