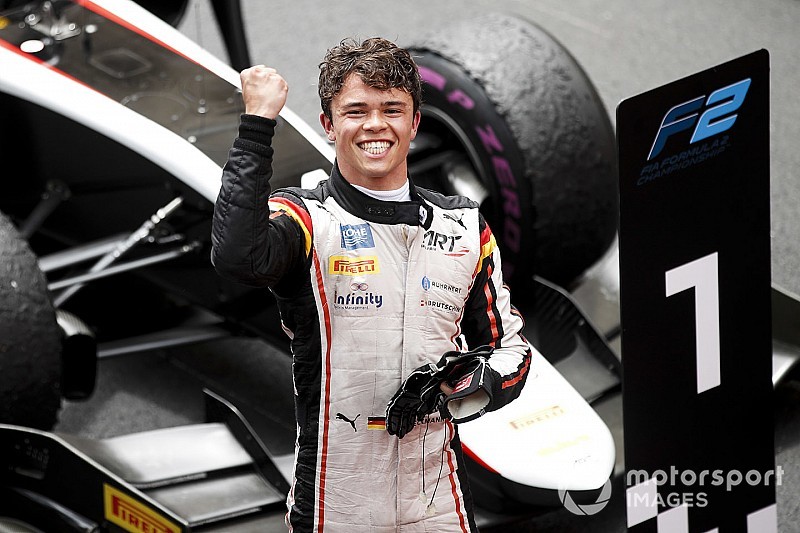 ART's Nyck de Vries took a lights-to-flag win in a bizarre Formula 2 feature race in Monaco where more than half of the field went a lap down while the race was red-flagged.

The race was stopped when Mick Schumacher sent Tatiana Calderon into a spin at Rascasse and the two cars, alongside Louis Deletraz's Carlin, blocked the circuit.

A lengthy process of pushing every car into the pitlane and putting them into the right order followed.

Nyck de Vries, Luca Ghiotto and Sergio Sette Camara spent the first half of the race in the top three but they were yet to pit, the red flag initially putting their positions at risk as their lead over those who have pitted evaporated.

However, as Calderon and Schumacher were running ninth and 10th as they collided, the top eight drivers were pushed to the front in the pits, thus putting the rest of the field a lap down.

The race restarted in just one lap, not giving the field time to unlap themselves, guaranteeing the same eight drivers a top eight result.

Once the race got green, de Vries again gradually pulled away from Ghiotto and had a 4.7s lead over the Italian when the top drivers completed their stops.

The Dutchman rejoined in the lead with ease and was also unfazed during a late safety car, caused by Mahaveer Raghunathan pushing Jack Aitken into the wall at the hairpin and Juan Manuel Correa crashing at the Swimming Pool.

The race was only restarted for the final lap and de Vries cruised to the finish, followed by Ghiotto.

Guan Yu Zhou lost 62 seconds in the second half of the race but still secured sixth, the last unlapped car as Correa crashed from seventh and F2 returnee Artem Markelov lost a lot of time.

Deletraz was closely followed by Sean Gelael and Nicholas Latifi but the latter hit the former at Rascasse and both fell behind, giving Anthoine Hubert and Ralph Boschung ninth and 10th.

It was the second incident Latifi was involved in as he also damaged his front wing with a botched move on Schumacher, the Canadian in the end finishing 13th.

Schumacher got two penalties after his Calderon crash, a five-second time penalty for gaining advantage off the track, and a drive-through for the contact, ending up 14th.

Callum Ilott's car died after the formation lap from second on the grid and did not take part in the race.