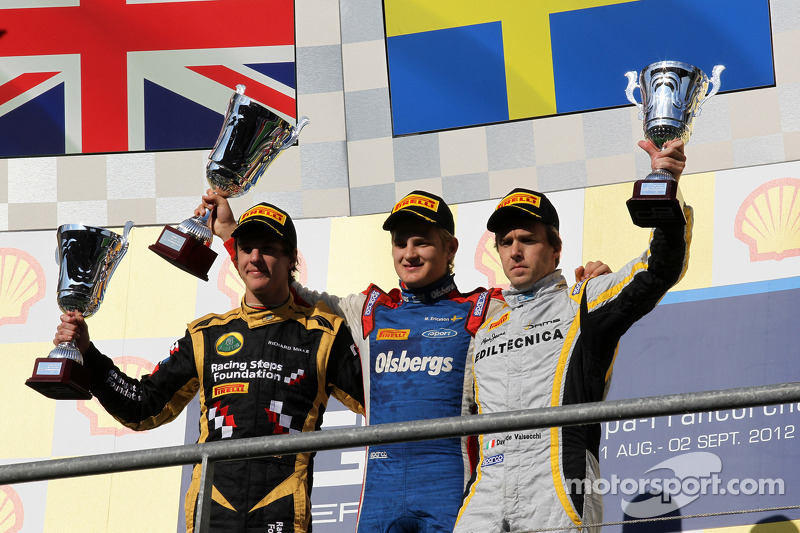 Marcus Ericsson dominated his rivals with a mature display of speed and guile and staying out of trouble in an eventful afternoon on track to roll home 11.5 seconds ahead of James Calado and Davide Valsecchi.

The win was set up with one of the Swede's customary fast getaways: Esteban Gutiérrez tried to take advantage of a poor start by poleman Rio Haryanto but was slowed when he touched the grass, allowing Ericsson to blast past the Mexican on the top straight. When the Swede squeezed by Calado further around the lap he was in P2 first time across the line, and looking for more.

The Lotus duo ran side by side down the hill out of turn one, with Gutiérrez coming out ahead, and yellow flags at the bottom meant the move had to be considered within the team, but up ahead Haryanto was under all sorts of pressure by Ericsson, which paid off next time through when the Swede pinched the lead on the inside of Eau Rouge.

Behind them Nigel Melker ran a little too wide at the famous corner, clipping the kerbs and hitting the barriers heavily to bring out an immediate safety car period: the field trundled round for a few laps until the pitlane opened on lap 6, with the whole field bar Giedo van der Garde, Stéphane Richelmi, Simon Trummer and Stefano Coletti taking advantage.

Gutiérrez, who waved his teammate by under safety car, suffered more bad luck with a slow stop due to a sticking right rear, while Haryanto undid his good work by spinning on his out lap, and the race was red flagged next time by to allow the marshals to repair the substantial damage to the barriers, with the restart delayed while race control waited for a medical helicopter.

The field eventually got back under way, behind the safety car for one lap, with the non-pitters in front of Ericsson, Calado and Valsecchi: van der Garde did what he could to further his cause by running a string of fastest laps, while behind him Ericsson slid past Trummer and then sat back to protect his tyres, while his English rival struggled to find a way by the Swiss driver, losing time every lap.

With the inevitable stops eventually coming to pass, Ericsson left everyone behind to easily claim the victory, with Calado leading Valsecchi home by 2 seconds to complete the podium. Behind them Josef Kral drove a solid race to pick up P4, with van der Garde right behind to salvage fifth position. Luiz Razia drove a clever race to ease his way up to sixth from P18 on the grid, ahead of Julian Leal and Felipe Nasr, who overtook Richelmi and Haryanto at the last corner for 8th place.

Haryanto sails to pole in Spa