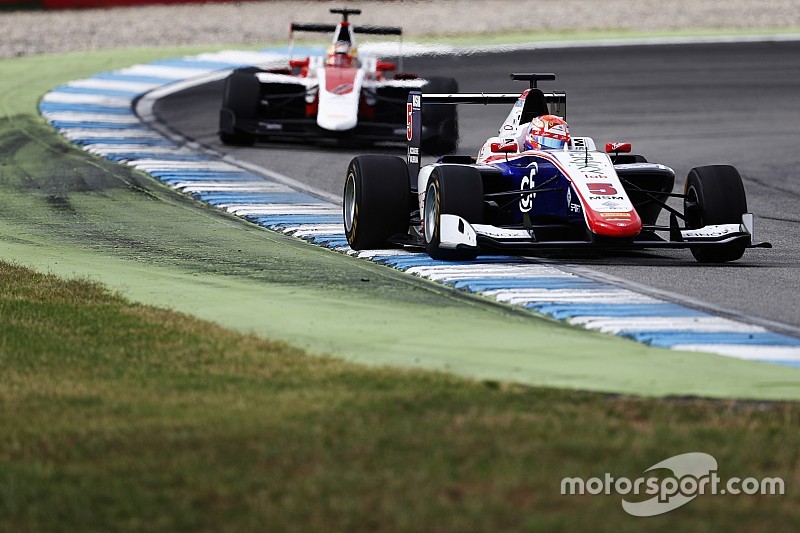 Ferrari junior Antonio Fuoco jumped ahead of poleman Alex Albon on a VSC restart to claim an unlikely GP3 victory at Hockenheim.

Fuoco cleared Albon and Nyck de Vries in one fell swoop and controlled the race, withstanding an attack from Charles Leclerc.

Albon would've expected an easier race when he lined up on the front row all by himself - after Jake Dennis couldn't get going in time on the formation lap and had to give up P2 for a pitlane start.

And indeed, Albon led into Turn 1, followed by de Vries, with the third ART car of Leclerc stuck behind Fuoco.

As Albon looked to be settling into a rhythm out front, the raced was neutralised by a VSC for a series of incidents in quick succession.

Alex Palou, running in P7, had been nursing a damaged car by that point already, his front wing dragging on the track surface - and, among the drivers bunched up behind him, Steijn Schothorst, Ralph Boschung and Nirei Fukuzumi went three-wide into Turn 9.

Unsurprisingly, that did not work out, with all three picking up damage. Of the trio, Boschung made it furthest down the road, only to dip into the gravel at Mobil 1 and be collected by teammate Matevos Isaakyan.

The race would restart at the conclusion of lap four and Albon, who had appeared to be well in the clear earlier, slowed significantly on the main straight, bunching up the four cars behind him.

When the VSC was lifted, Fuoco stormed past both Albon and de Vries, the Dutchman likewise getting a run on the poleman.

Albon tried to hold it round the outside of de Vries into Turn 1 but ended up bouncing over the kerb, losing out to Leclerc and Parry as well.

Leclerc then passed de Vries for second on the straight into the hairpin, with Parry trying to follow suit on exit, banging wheels with the Dutchman and dropping behind Albon.

Over the next few laps, Leclerc reeled in Fuoco for the lead, but couldn't find a way past - and soon began to lose pace.

While the Italian coasted to victory, the Monegasque began to struggle with tyrewear, having to pull out all the stops to keep de Vries at bay in the closing stages.

After defending the spot aggressively on the penultimate lap, Leclerc ran wide at Turn 1 the final time around, giving up second place to de Vries and coming under pressure from Albon.

The poleman had to settle for fourth, with Leclerc taking fifth.