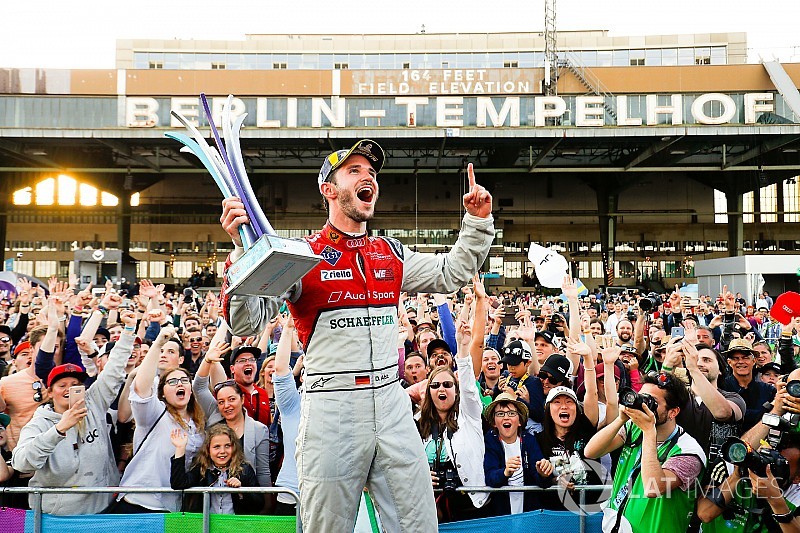 Daniel Abt converted pole into a dominant win in Berlin ahead of his teammate Lucas di Grassi, as Audi became the second Formula E team to secure a one-two result.

At the start, Abt comfortably led away from pole as his fellow front row-starter Oliver Turvey had to defend hard from Vergne on the run to the near-circular Turns 1-2 complex.

Jerome d’Ambrosio made a late move to the outside to jump ahead of Vergne from fourth on the grid and ran third in the opening laps before being shuffled down the order.

Abt began to pull clear of Turvey as di Grassi passed d’Ambrosio and charged after the top three.

By this stage, Abt had built up a 3.9s lead at the head of the race, which he marshalled for the rest of the first stint.

Turvey was the first of the leaders to pit on lap 22, with the Audi drivers, Buemi and Vergne coming in one tour later.

It was here that Abt’s chances of winning looked most perilous as he was forced to wait for Buemi to enter his pitbox before he could return to the track, which allowed di Grassi to cut his lead to 0.6s.

It looked as though the reigning champion would mount a challenge for the win, but Abt was able to re-establish his lead and pulled away from di Grassi throughout the second stint, setting the fastest lap on lap 26 to take maximum points from his home race.

Abt came home 6.758s clear to take his second FE win after his Mexico City triumph earlier in season four.

Vergne, who had barged his way by Buemi at Turn 1 just before the pitstops, battled his way back to third after losing out to the Renault e.dams driver during the car swap sequence.

The duo erased a 6.8s gap to Turvey in the first half of the second stint, with Buemi passing the NIO driver with a late move at the final corner on lap 33, with Vergne following him through.

Vergne then attacked Buemi at the Turn 6 hairpin on the next tour, seizing the advantage with a late switch to the inside to seal the final podium spot.

Buemi therefore finished fourth ahead of Turvey and Jaguar’s Mitch Evans and Bird, who rose from ninth and 10th on the grid respectively.

Bird’s result means Vergne’s lead is up to 40 points with three races of the season remaining.

Maro Engel claimed eighth for Venturi as Andre Lotterer, who started last and had to serve a 10-second penalty at his pitstop, and Nick Heidfeld took advantage of a late multi-car scrap involving Nelson Piquet Jr and Jose Maria Lopez, which left them 12th and 18th, to round out the top 10.

Felix Rosenqvist finished 11th after running very wide at the first corner as he went a long way to the outside of the leaders.

The Mahindra driver, third in the standings, nearly spun onto the run-off at the exit of the long left-hander but kept his car out of the barriers.

He battled his way back up the order but has now fallen to 76 points behind Vergne in the standings. D’Ambrosio eventually came home 19th for Dragon.

Vergne says Audi "in a different league" in Berlin