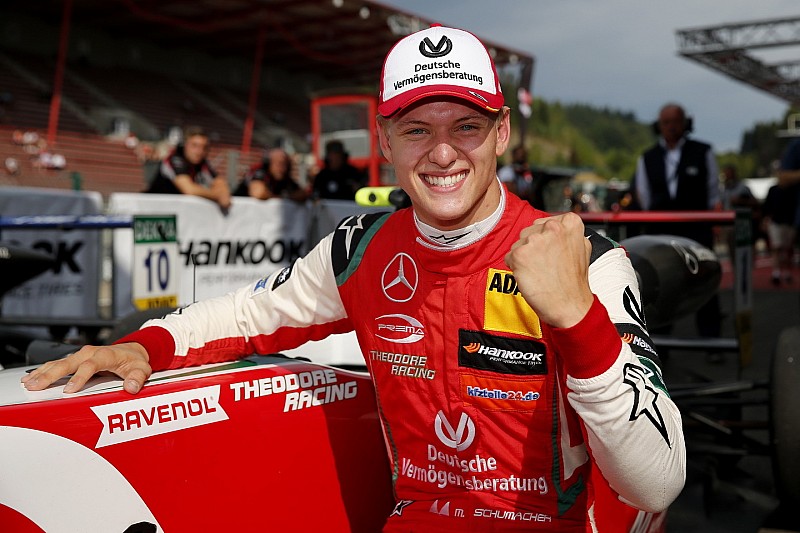 Mick Schumacher emerged from an exciting three-way battle to take his maiden Formula 3 European Championship race victory on a slippery track at Spa.

Schumacher overtook Prema Powerteam Dallara-Mercedes stablemates Robert Shwartzman and Marcus Armstrong on the 10th lap of 16 to complete a charge from sixth on the grid, despite a first-lap collision with Guan Yu Zhou.

Poleman Zhou inserted his Prema car into the lead, but Armstrong and Shwartzman slipstreamed past him on the run to Les Combes on the opening lap.

Schumacher also tried to pass Zhou, but a bump between the two spun Zhou down to the back of the field.

Armstrong kept Shwartzman at arm's length over the early laps, but his fellow Ferrari Driver Academy prospect reeled him in, while Schumacher recovered from an off-the-road moment at Les Combes to latch on to the pair of them.

At the beginning of the 10th lap, Armstrong defended into La Source, but Shwartzman had better momentum on the exit to pass him as they ran downhill, while Armstrong also found Schumacher to his inside as they headed into the right-handed part of Eau Rouge.

Schumacher then used the slipstream to pass Shwartzman into Les Combes.

Within two laps Schumacher had inched the gap out to just over a second, and he kept Shwartzman at bay by 1.352 seconds, with Armstrong completing a Prema 1-2-3.

"I'm really happy with the win," said Schumacher, whose father Michael made his Formula 1 debut at Spa and won six Belgian Grands Prix there - including his maiden F1 triumph in 1992.

"I was smiling about the rain - I like wet and drying conditions, the half-half we had today.

"I had to have the mental strength to keep it all together, and I got a gap when I needed to so that the guys couldn't get me in the slipstream."

Juri Vips starred from his grid-penalised 11th on the grid, and the Motopark driver was sixth by the time they got halfway round the first lap.

He passed Enaam Ahmed for fifth into Stavelot, then demoted Jehan Daruvala for fourth at the same spot on lap two.

The Motopark set-up seemed to come into its own as the track dried, but the gap was too great to the Prema trio in front and Vips took a lonely fourth.

Vips's teammate Dan Ticktum made slower progress, attracting the attention of the stewards for an incident with Alex Palou and then for changing direction on the straight to break the tow to Ahmed.

The latter incident came just after Ticktum had demoted Hitech GP driver Ahmed for fifth, with the two Londoners rounding out the top six.

Ticktum has now fallen a point behind Armstrong, who is back in the lead of the standings.

Two more Motopark drivers were next, with Jonathan Aberdein seventh and Sebastian Fernandez putting in his best drive to date for eighth.

Hitech man Palou was ninth, while Fabio Scherer set the fastest lap of the race as he stormed through to 10th in his Motopark car, after a collision with Nikita Troitskiy on the opening lap - for which the Russian was given a drivethrough penalty - had dropped him to the back of the pack.

Daruvala faded to 11th, while title contender Ralf Aron slipped to 14th behind the recovering Zhou.