Audi weekend round up 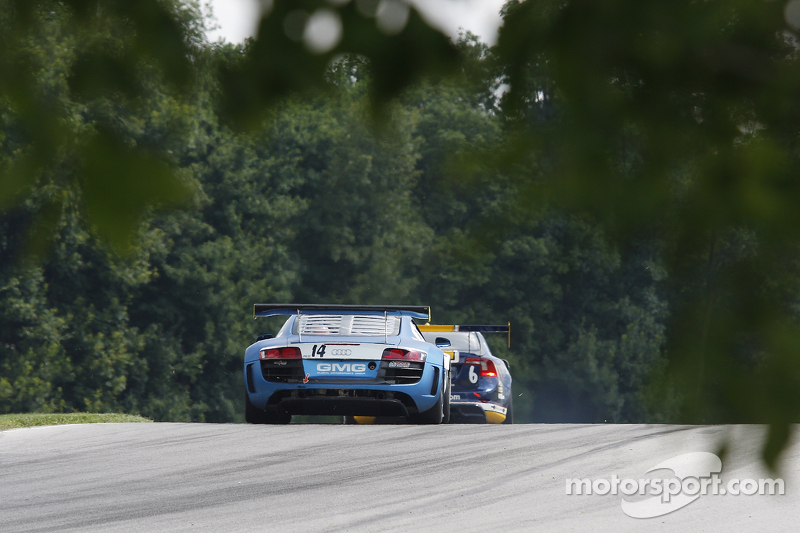 Audi's activity this past weekend worldwide marks more success for the German marque.

Round six of the DTM headed to new territory in Russia this weekend. The event at Moscow Raceway proved to be very successful for the Audi teams. Saturday morning free practice saw six Audis within the top ten. Qualifying was highlighted by a 1-2 for Audi, Mike Rockenfeller on pole and Mattias Ekström in second. From the start of the race Rockenfeller and Ekström lead from the front. Behind them there was misfortune for Molina and Mortara who both retired from the event. Ekström got passed Rocky during the pit stops, but their positions were swapped around by the finish. Rockenfeller came home to win again in 2013, and in doing so he extended his championship points lead considerably. Ekström finished second ahead of Tambay in fourth and Green in sixth, making it four Audis within the top six.

The Audi R8 LMS Cup was in South Korea this weekend, debuting at the Inje Circuit. The series is an Audi one-make series, consisting of eighteen Audi R8 LMS race cars this weekend. The first race was won by Earl Bamber from New Zealand, and the second race saw the reigning champion, Marchy Lee, taking victory.

The ADAC GT Masters resumed for the fourth round held at the Nürburgring. Six Audi R8 LMS ultra cars were entered from three different teams, with a podium finish highlighting the weekend’s results. Qualifying for the first race only had one Audi within the top ten, the #28 R8 LMS ultra in sixth place, followed by all of the Audis inside of the top twenty. The grid for the second race saw no Audis inside of the top ten, but the three Prosperia C.ABT Racing were together in positions twelve to fourteen, with the #28 leading #26 and #27. Race one ended with an excellent podium result for Prosperia C.ABT Racing. The #28 of Winkelhock and Jöns capitalised on their top ten starting position and finished the race on the podium in second position. The top ten was rounded out by the #27 Audi in tenth. Race two saw the Audis hovering outside of the top ten during the first half of the race and ultimately two penetrated the top ten by the finish. The leading Audi was the #1 MS Racing R8 of Sebastian Asch and Florian Stoll who finished eighth. The second Audi inside the top ten was the #28 in ninth.

Rounds six of the South African Bridgestone Production Car Championship headed to Phakisa in Welkom. All four of the regular Audi S4s were entered, fielded by VMP Motorsport and Terry Moss Racing. The BMW team proved to have the pace this weekend, but the Audi squad held their own in the races. Two podium results highlighted the weekend, with Michael Stephen finishing third in race two and Gennaro Bonafede finishing third in race three. Bonafede proved to be the fastest Audi driver on the day, and his consistency netted him third overall. Michael Stephen remains the championship leader in his TMR Audi S4.

Mid Ohio hosted the seventh round of the Pirelli World Challenge. Six Audis were entered: Four Audi R8 LMS cars from GMG Racing, one R8 GRAND-AM from JCR Motorsports and one TT RS from Istook’s Motorsport. The first race saw a spirited drive from the former championship leader, James Sofronas, as he battled up to third place. Two Audis finished within the top ten in race one. From the start of race two Sofronas, in the #14 GMG Audi R8 LMS, rocketed up to up second, but shortly thereafter he was passed by Pobst in the Volvo. Sofronas then began a race-long battle to maintain third position, and most importantly, trying to stay ahead of Johnny O'Connell. Duncan Ende in the #24 GMG Audi was also battling in the leading group. O'Connell eventually retired from the event and James was able to maintain his third place, to achieve his second podium finish of the weekend, collecting valuable points in his bid for the driver’s title. All five Audi GT cars finished race two within the top ten.

Australian GT headed to Queensland Raceway this weekend for round five, the penultimate round of the 2013 season. The two Audi teams performed consistently this weekend. During qualifying the Audis placed in sixth (Salmon) and eighth (Koustoumidis). The first race saw the Audis finishing together with the #71 R8 LMS leading home the #6 R8 LMS ultra in seventh and eighth. Race two was held in the dark and the highest Audi finished in fourth, the #6 car of Salmon and Talbot. The #71 of Koustoumidis and Macrow finished twelfth. The third and final race of the weekend yielded top five finishes for both Audis. The #71 R8 LMS in fourth ahead of the #6 R8 LMS ultra in fifth.

The British Touring Car Championship concluded its summer break this weekend as the series headed to Snetterton for round six. The two Audi A4 NGTC cars from Rob Austin Racing showed good pace this weekend, following a few difficult outings. Rob Austin was the highest placed Audi during qualifying with twelfth place. Race one ended with Austin finishing fifteenth and a retirement for his teammate Will Bratt. The second race saw Austin battling well and he progressed into the top ten, but he dropped to fourteenth on the last lap. He was followed by his teammate in sixteenth. Austin was as high as sixth during race three, but he ultimately finished in twelfth place and Bratt had a second retirement for the day.

The Kerrick Sports Sedans Series was also at Queensland Raceway this weekend, hosting round three alongside the Australian GT Championship. The Audi A4 of Darren Hossack was at the event and showed excellent pace as always. He qualified on pole for the first race and converted it into a second place finish. He finished second again in race two, and finished off a good day with victory in the third and final race.

A two-day test and track day event was held by kunoschaer. Motorsport &amp; events at Monza this week. A number of cars were presented, including two Audi A4 DTM cars. This was the latest in a number of A4 DTM cars being spotted in private hands recently. The two cars which were present are both different A4 DTM versions. The first car is a 2008 Audi A4 DTM R14 fitted with the blue 2011 Audi Sport Team Rosberg Tv Movie livery, which was driven by Filipe Albuquerque during the 2011 DTM season. This was the first public appearance of a R14 in private hands. The second car appears to be a 2006 Audi A4 DTM R12 plus which has a new black and orange livery. Who now owns these two cars, and if they will be seen privately entered in any championships is not yet known.

Mattias Ekström lost the Norisring DTM victory on Tuesday. His exclusion from the race was upheld following the DMSB appeal court ruling. The ruling also stated that there would be no race winner at the Norisring, thus meaning that Ekström remains excluded and Robert Wickens remains the second place finisher. The official statement from Audi Sport following the ruling: “In the spirit of sport, we respect the decision by the DMSB appeal court.”

M-Sport had entered an Audi R8 LMS ultra during the 2013 British GT season, driven by Rembert Berg and Warren Hughes. The team will now be focussing on the testing and development of the new Bentley Continental GT3 race car for the remainder of the season. Thus WRT has been selected to continue fielding the R8 LMS ultra for Berg and Hughes. This will be WRT’s debut in the British GT. They will field the car at the final three British GT rounds, starting off with round five at Brands Hatch next weekend, followed by Zandvoort and the finale at Donington Park.

Fall-Line Motorsports, one of the latest Audi Sport customer racing teams, was testing their R8 GRAND-AM at Autobahn Country Club this week. They are preparing for the remainder of the Grand-Am season after their debut at the Six Hours of the Glen and the Brickyard Grand Prix at Indianapolis.

The Pirelli World Challenge has announced that they will be allowing FIA GT3 cars to run their full GT3 aerodynamic packages as from the beginning of 2014. FIA GT3 cars, such as the R8 LMS, have been allowed in World Challenge for the last two years, but all of the GT3 cars required a number of changes, specifically aerodynamically.

DragonSpeed, the first North American team to acquire an Audi R8 LMS ultra, has made an announcement via their Facebook page this week. They have stated that their R8 LMS ultra will be competing in North America during 2014. They have however not stated in which series this will be. With recent announcement the possibility of participation exists within the USCR and the Pirelli World Challenge.

The Phoenix Racing R8 LMS Race-Taxi was also at Moscow Raceway. Since the last VLN round the car has been seen in a G-Drive livery, similar to the #3 Audi R8 LMS ultra which competed in the 2013 Nürburgring 24 Hours. The car was driven in Russia by Roman Rusinov. He completed taxi rides at the track and a press event at a public fuel station.

Nine-time Le Mans winner, and Audi Sport factory driver, Tom Kristensen, took part in the Copenhagen Historic Grand Prix this weekend. He was entered in a Lotus Cortina. An Audi R8 LMS ultra was also on site thanks to Audi Denmark. Tom completed demonstration laps in the Audi R8 LMS ultra (2012 spec) which was in a WRT livery. The demonstration / taxi-ride laps were part of an initiative to help raise money for the national hospital's children's department. This was also the first ever appearance of an Audi R8 LMS ultra in Denmark.