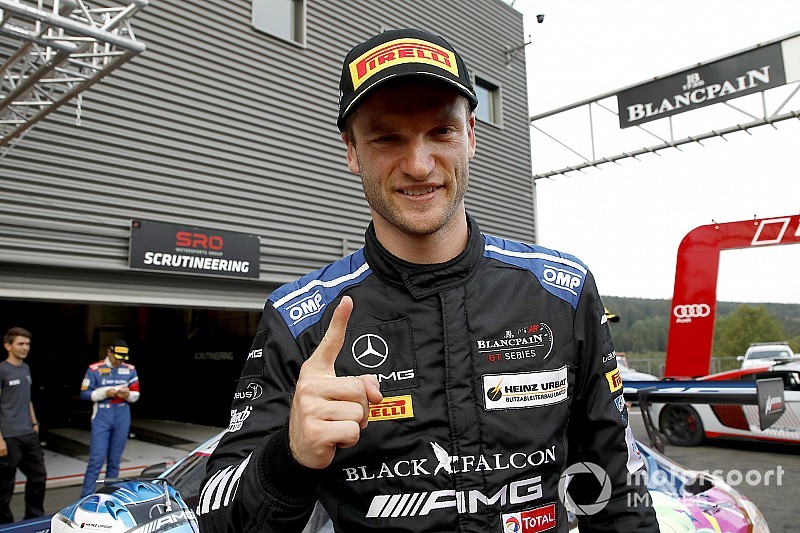 Maro Engel secured pole position for the Spa 24 Hours for the Black Falcon Mercedes squad after edging out Porsche driver Laurens Vanthoor by just 0.017 seconds in Superpole on Friday evening.

As Black Falcon's #4 Mercedes AMG-GT3 had topped Thursday night's first qualifying session, Engel was the 20th and final driver to head out and set his two laps.

But on his second lap former DTM and Formula E racer Engel nailed a 2m18.588s to grab pole for himself and his teammates Yelmer Buurman and Luca Stolz.

"Going into qualifying I was a little bit worried we might not have a chance of pole, but as soon as I did the first three-quarters of the first lap, the car was feeling great," said Engel.

"My engineer told me that I only needed half a tenth, so I squeezed everything possible on lap two and super-happy that it worked out."

Vanthoor, who shares the #117 Porsche with Timo Bernhard and Earl Bamber, joked: "Maybe I should have gone to the toilet once more, it would have helped!

"If you asked me to sign [for second] before Superpole I would, but if you're on pole for a long time and then you lose it by 0.017s, you would be disappointed or you wouldn't be a racing driver."

Ferrari made it three different marques in the top three courtesy of Davide Rigon's effort of 2m18.806s at the wheel of the #72 SMP Racing 488 GT3, which had been the time to beat until it was bested by Vanthoor.

Nick Tandy put the best of the ROWE Racing Porsches in fourth, another 0.016s further back, followed by the HubAuto Corsa Ferrari driven by Daniel Serra.

Best of the Audis was the #2 Team WRT entry of Dries Vanthoor in sixth ahead of Nico Muller in the sister #1 R8 LMS and the Silver Cup-entered Attempto Racing car of Mattia Drudi.

Another Mercedes, the GruppeM car of Maxi Buhk, and the ROWE Racing Porsche driven by Mathieu Jaminet rounded out the top 10.

Aston Martin's pair of R-Motorsport Vantage GT3s ended up 12th and 13th in the hands of Maxime Martin and Jake Dennis, while the sole cars in the shootout from Lamborghini and Nissan ended up 19th and 20th after both were handed penalties.

The FFF Racing Lamborghini Huracan GT3 of Dennis Lind and the KCMG Nissan GT-R NISMO GT3 of Katsumasa Chiyo fell foul of the rules dictating the time at which cars must leave the pits during the Superpole session.

* penalised for not leaving pits at the correct time