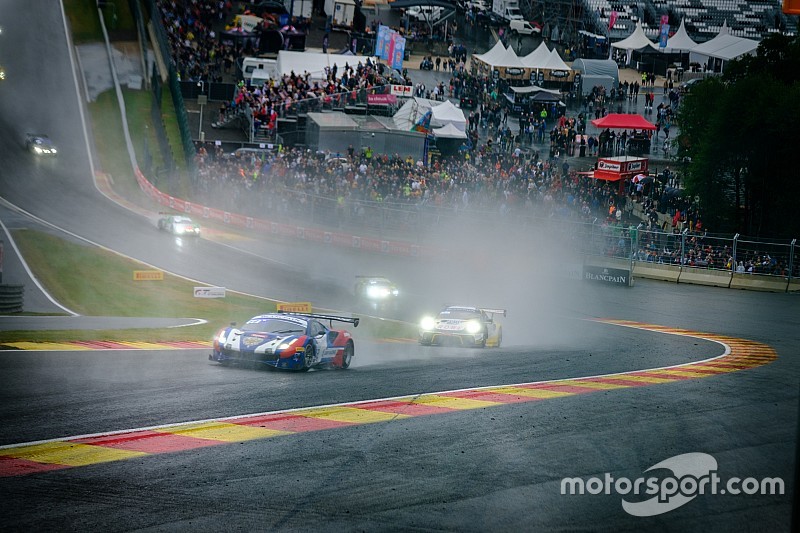 SMP trio Mikhail Aleshin, Davide Rigon and Miguel Molina had cycled into the lead in the #72 Ferrari 488 GT3 at the one-quarter mark in the Belgian endurance classic, with Aleshin staying out on slick tyres during a rain shower to scoop the maximum 12 bonus points.

That was despite falling back in the early stages of a race that started in full wet conditions and was interrupted by numerous full-course yellow periods in the opening hours.

The arrival of forecast heavy rain for the start meant the start was taken behind the safety car, although towards the end of the first hour conditions had improved sufficiently for most cars to make the switch to slick tyres.

Maro Engel had held the advantage in the polesitting #4 Black Falcon Mercedes AMG-GT3 until the second FCY period, triggered by Nick Foster spinning off and hitting the barriers in the HubAuto Corsa Ferrari during the second hour approaching Pouhon.

Another FCY intervention followed not long after when the #37 Am class 3Y Technology BMW M6 GT3 suffered a major crash at Les Combes that suspended the race for over an hour.

A mere eight minutes after action resumed, there was a further FCY period caused by Ryan Ratcliffe making a heavy impact with the barriers at Stavelot in the Team Parker Bentley Continental GT3, causing a further 35-minute delay.

The SMP Ferrari crew, which had fallen out of the top 10 early on, had managed to work its way back to the front of the pack by the end of the fifth hour before stopping, and then cycled through the order once more in the sixth hour before the rain returned.

At the six-hour mark, Aleshin led by three seconds from Christian Engelhart in the #63 Grasser Racing Team Lamborghini Huracan GT3, which inherited second when Nico Muller reacted to the worsening weather and pitted the #1 WRT Audi R8 LMS.

Third place was held by Yelmer Buurman in the #4 Black Falcon Mercedes ahead of Fabian Schiller in the #88 ASP Mercedes, Jake Dennis in the #76 R-Motorsport Aston Martin Vantage GT3s and the top BMW, the #42 Schnitzer M6 with John Edwards at the wheel.

The #1 Audi that had been running second was classified ninth after six hours after its last-minute stop, giving it the final bonus point on offer.

Several cars that had starred in the early stages were hit by penalties that dropped them down the order, with Porsche in particular suffering a number of setbacks.

Kevin Estre had charged from 11th on the grid to second in the first hour in the #20 GPX Racing Porsche 911 GT3-R, but the team earned a drive-through penalty for a pitlane infringement.

The #117 Team75 Bernhard Porsche was also handed a drive-through as Laurens Vanthoor was caught speeding under yellow flags, while the #998 ROWE Racing Porsche that had led after three hours was penalised for the same offence.

Also picking up a drive-through penalty was the #2 WRT Audi as a result of Dries Vanthoor speeding in the pitlane, dropping that car out of third.

R-Motorsport's other Pro class entry, the #62 Vantage, retired after Matt Parry damaged the car by spinning into the barriers at Stavelot.