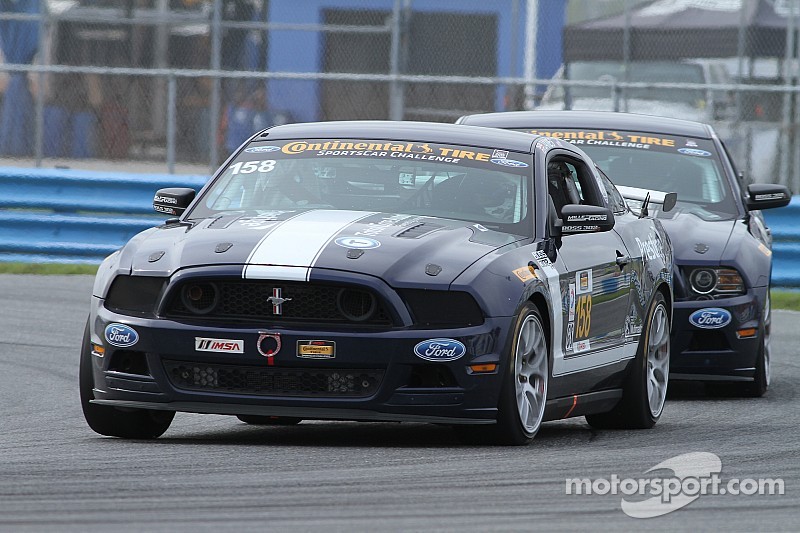 Daytona Beach, Fla. – Mike McGovern was fastest in the morning and Billy Johnson led the way in the afternoon for the second straight day as Ford Mustang Boss 302R drivers dominated Saturday’s Continental Tire SportsCar Challenge practice in the Roar Before the Rolex 24 at Daytona International Speedway.

· Rebel Rock Racing put a “celebrity” in its No. 08 Porsche 911 for the morning practice. Grammy Award-winning team owner Jim Jonsin – no stranger to working with the stars of the music industry, was happy to have TUDOR Championship regular Lally at the wheel of his car. “For me, Andy Lally is a real celebrity,” Jonsin said. “Having a guy like Andy getting in one of our cars really helps. He provided some amazing feedback. It would be great to get him back in our car for the upcoming race – and more.”

· Matt Dicken took his first professional laps on Friday, at the wheel of the No. 36 Strategic Wealth Porsche Cayman fielded by Goldcrest Motorsports. The Louisville, Ky., driver missed Friday’s practice due to business in the West Indies. While the BMW Performance 200 will be his first IMSA event, he has driven at Daytona in club and vintage racing.

· Ethan Low will be making his Continental Tire Challenge debut in the No. 31 Bodymotion Racing/Visit St. Pete-Clearwater Porsche Cayman in the ST class, beginning with the BMW Performance 200 in two weeks. The 18-year-old high school senior did not get to test the car at the Roar due to mechanical problems, but Bodymotion team owner Mike Bavaro allowed him to get a few laps in the team’s GS car, the No. 12 Porsche 911.

· Continental Tire Challenge competitors will get a pair of sessions on Sunday to finish the Roar Before the Rolex 24. Sunday opens with one-hour practice at 9 a.m., followed by a final 45-minute period at 1:35 p.m.

Eric Foss, Driver of the No. 56 Murillo Racing/Mosing Motorcars Porsche Cayman, defending ST champion: “It’s going to be a tough season with a lot of new teams coming on board with good driver combinations. We’re going to have to work harder to repeat as championships. It’s going to be very important to execute consistently. Daytona is a new venue for us with the Cayman (he won last year for Murillo Racing in a BMW 328i), so we’re using the Roar to experiment with a lot of new combinations. Justin (Piscitell) was able to step up to fill the void left by the absence of Jeff (Mosing, who missed the Roar due to a family commitment), and provided a lot of good feedback.”

Mike McGovern, Driver of the No. 2 Jim Click Racing Ford Mustang Boss 302R, fastest in both Friday and Saturday’s opening sessions: “It’s always nice when you’re on the top of the leaderboard. Obviously, the car is working real well. The team is doing a great job. Everyone here has a lot of experience, and it’s awesome to work with them.”

Jade Buford, Driver of the No. 158 Multimatic Motorsports/Miller Racing Ford Mustang Boss 302R, current GS track record holder: “The off-season seemed pretty long, and it’s great to be back in these cars. I’m looking forward to the race. I think we’ll be pretty competitive this year.”