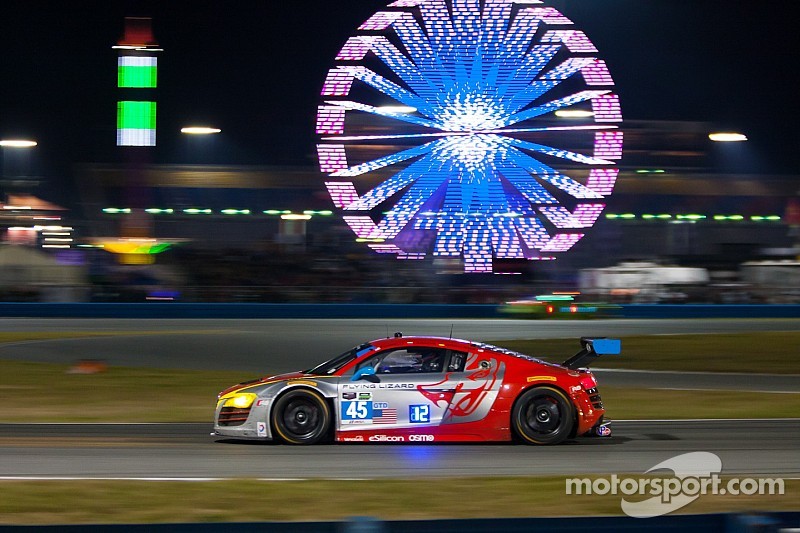 Will attend the Roar this week for pre-race practice.

After a controversial second place finish at the 2014 Rolex 24 Hours of Daytona, Flying Lizard Motorsports has announced the driver lineup for their fight for the 2015 endurance event title. The #45 Audi R8 LMS will be driven by Japan's Tomonobu Fujii and Satoshi Hoshino, American Robert Thorne and German Markus Winkelhock.

In the final lap of the 2014 event, the No. 45 Flying Lizard Audi and the Level 5 Motorsports Ferrari were involved in an intense battle for the lead position. Given a 75 second penalty for avoidable contact, the Ferrari dropped to fourth place in the provisional results. Five hours after the Lizards celebrated their class win, the penalty was reversed, naming Level 5 as the winners.

Hungry to reclaim the top step in 2015, the team heads to Daytona International Speedway January 9-11 to participate in the first official test of the season at the Roar Before the 24. Like the rest of the team, Program Manager Darren Law feels the events of 2014 provide even more motivation for the 2015 effort.

"The Lizards have celebrated success at the Rolex 24 Hours of Daytona, but we're still missing that crucial win," said Law. "We came incredibly close last year, and fully expect to be there at the end. We are back with the same crew and engineering staff as last season that took us to the podium. We're entering the next two events at Daytona International Speedway with a powerful driver lineup in Fujii, Hoshino, Thorne and Winkelhock."

No stranger to endurance races, Audi Japan Super GT driver Tomonobu Fujii holds the 2007 Japan Le Mans Challenge LMGT1 title, the 2011 Super Taikyu Endurance Japan Champion title, and a podium at the 2013 Dubai 24 Hours. In his past ten years of experience in Super GT, Fujii picked up 8 wins and 21 podiums. After finishing 3rd and 2nd at the Super GT Sprint Grand Prix in 2010 and 2011, Fuji went on to win the event in 2012. 2015 will mark the 34-year old's first Rolex 24 Hours of Daytona.

Also new to the Rolex 24, Satoshi Hoshino brings experience of the Audi R8 LMS GT3 in GT Asia, as well as the 2014 class champion title in the Porsche Carrera Cup Japan. A professional fencer for 30 years, Hoshino is relatively new to racing, but has proven to be a quick study. In the past four race seasons, Hoshino earned 18 wins in a variety of many races around Japan.

American Robert Thorne joins Flying Lizard Motorsport for his return to the Rolex 24, seven years after his first run at the legendary event. Thorne closed out the 2014 race season in Pirelli World Challenge with an impressive win for K-PAX Racing at Miller Motorsports Park. The 24 year old held off intense pressure from veteran Ryan Dalziel for the entirety of the race to take his second and final win of the season.

'More hungry than anyone'

Perhaps more hungry than anyone for the win is Markus Winkelhock, the driver who completed those intense final laps in the No. 45 Flying Lizard Audi in the 2014 Rolex 24. In his other run at the event in 2013, Winkelhock was running second in the final lap, close behind the class leader when his car ran out of fuel, resulting in a frustrating 15th place finish.

"We have a renewed energy this year, even bigger than last," said Law. "We're fully confident in the effort we'll put forth for this event. Each of the drivers brings unique expertise to the table, and an event of this scale is undoubtedly a team effort. As a former driver and winner of the 24, my new management roll gives me the unique opportunity to also contribute additional insight that will prove beneficial to our success as a team. With our drivers, crew, and engineers, I feel we have a real advantage. We're excited to finally get back to the track and get testing started."

Tomonobu Fujii: "I am really excited with this announcement. 24 Hours of Daytona has been my big dream. I am really thrilled to be able to work with the world-famous team "Flying Lizard Motorsport". Of course, I know a lot about their history. I would like to thank my team, sponsors and all the fans for giving me such a great chance. I well understand the great career of the team whom I race together, including Hoshino's experiences whom I join together from Japan. I have never been to Daytona International Speedway, but I really can't wait to run on the test days. I know the high performance of Audi R8 LMS in Super GT and I would like to take advantage of it in the endurance race. Thank you for your continuous support."

Satoshi Hoshino: "I am excited, but at the same time feel the big pressure for the great chance to race in 24 Hours of Daytona which has a long tradition. I am a bit concerned with having the least experiences among the four drivers, regardless of my age. But I am confident that I can concentrate on my job with such a great team like Flying Lizard Motorsport. I have been focusing on Porsche Carrera Cup Japan to accumulate my experiences in Japan. I would like to make the best use of these experiences and coincidentally, I already have the experience of Audi R8 LMS GT3 in GT Asia a half year ago. I would like to execute my mission and enjoy the big stage of 24 Hours of Daytona. Thank you for your continuous support."

Robert Thorne: "I'm very excited for the opportunity to race with Flying Lizard. They carry an extremely high level of professionalism, success, and respect. I have had the pleasure of running the Rolex 24 Hours of Daytona once before in 2008, and at the time I was 17 years old and was just looking to finish. Racers Edge brought their A game, trusted me with the car, and we ran a very successful race. Now partnering with Flying Lizard, I think the goal is very clear: we are all searching for the win. I am very happy they have chosen me to help fight for the top honors and look forward to getting to know them next week at the Roar."

Markus Winkelhock: "After a thrilling final lap last year, unfortunately, we only finished second at the end. I am fully motivated to fight for the victory in 2015. I have great teammates and the perfect team behind me to go for my target. I always love it to come and race in Daytona with that special atmosphere."

Brumos back for Daytona and Sebring with Dempsey/Wright

Turner Motorsports back to TUSC GT-Daytona class for 2015