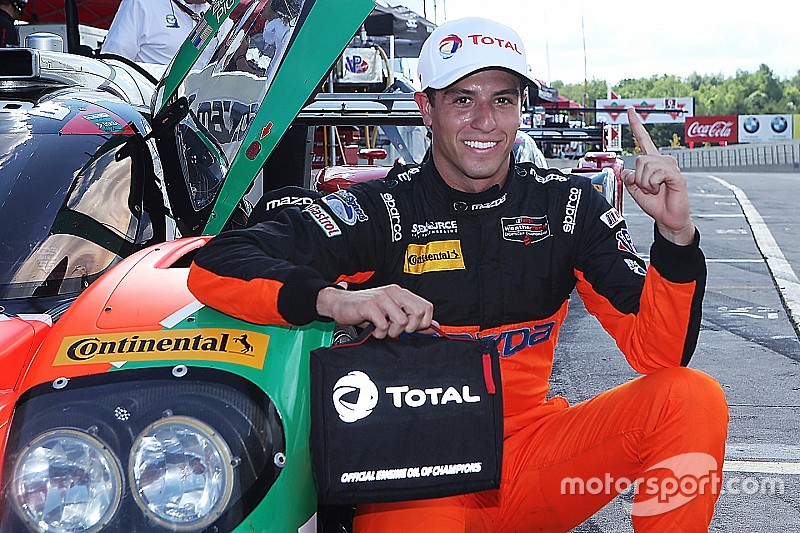 The American turned a lap of 1:10.126 (126.2mph) on the 2.459-mile, 10-turn circuit in the No. 55 Mazda Prototype. Nunez captured the first pole for the car at Mazda Raceway Laguna Seca, and joined co-driver Jonathan Bomarito in finishing third at Detroit, the best finish for the Mazda Prototype.

“Qualifying is good and all, but we have one focus and that’s to win the race tomorrow,” Nunez said. “Everyone’s prepared for that. The drivers, crew, everyone has been working their tails off at the shop. They’ve been practicing pit stops. And the drivers have been working to be physically fit because this track is very challenging. Now we’re going to go out and see how it turns out tomorrow.”

Ricky Taylor will join Nunez on the front row, running a best lap of 1:10.435 (125.6 mph) in the Wayne Taylor Racing Corvette Daytona Prototype co-driven by his brother Jordan.

Row 2 also features a Mazda-Chevrolet pairing. Tom Long was third fastest in the No. 70 Mazda Prototype co-driven by Joel Miller. He edged out Christian Fittipaldi, in the first of the Action Express Racing Corvette DPs.

It was Garcia’s first pole since the race at Mazda Raceway Laguna Seca in 2014. Garcia and co-driver Jan Magnussen are going for their second Canadian Tire Motorsport Park victory together after winning previously in 2014. Magnussen owns a total of five victories at CTMP.

“It’s always important to be up front and luckily to be competitive again,” Garcia said. “The car felt pretty decent all year long, but at some points we were lacking some speed. We seem to like this track a lot. It suits Corvette Racing [but] we know it’s a three-hour race and everything can change. Track position is really important here.”

Joining Garcia on the front row will be 2016 24 Hours of Le Mans GTE Pro winner Dirk Mueller, who qualified the No. 66 Ford Chip Ganassi Racing Ford GT less than tenth behind the ’Vette.

Richard Westbrook and Ryan Briscoe, who have won the last two IMSA races, will roll off third in the second Ford.

Brazilian driver Alex Riberas earned the second GT Daytona Pole of his career in the #23 Porsche 911 GT3 R run by Team Seattle / Alex Job Racing. His best lap of 1 minute, 18.245 seconds (113.1 mph), put him three tenths clear of the #6 Audi R8 LMS of Stevenson Motorsports, driven by Andrew Davis and Robin Liddell. Third on the GTD grid will be Spencer Pumpelly in the #16 Lamborghini Huracán of Change Racing.

The Prototype Challenge class was led by Colin Braun who captured his second pole of the season with a new PC lap record of 1:11.946 (123.0mph) in the No. 54 CORE autosport ORECA he shares with Jon Bennett. James French of Performance Tech was second with Stephen Simpson third in the #85 JDC-Miller Motorsports car.

Cameron, Curran earn first win of the season at CTMP