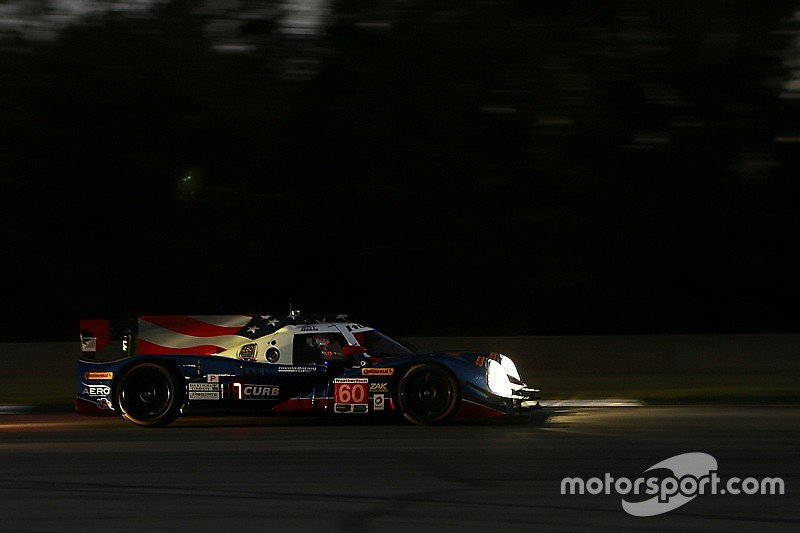 The Frenchman left it until his 41st lap of the daunting 2.54-mile road course and the final quarter-hour in a 90-minute practice session to send the #60 Ligier-Honda JS P2 to the top of the timesheets, and thus complete a practice session trifecta for the MSR team.

Pla's lap of 1min13.541 was not only fastest time of the first practice day for the IMSA WeatherTech SportsCar Series finale, it also pulled him half a second clear of Jonathan Bomarito’s best in the fastest of the Mazda Prototypes.

Pipo Derani just about got within a second of the leader in Extreme Speed Motorsport’s Ligier-Honda, with Ricky Taylor sixth in the Wayne Taylor Racing Chevy DP.

In GT Le Mans, Dirk Muller put the #66 Ganassi-Ford GT in front, ahead of Alessandro Per Guidi’s Scuderia Corsa Ferrari 488, this afternoon’s pacesetter. Ryan Briscoe made it two Fords in the top three, with Augusto Farfus fourth in the #25 BMW M6.

The #4 Corvette of Tommy Milner/Oliver Gavin and Marcel Fassler, which needs to finish seventh on Saturday to ensure the GTLM title, was only 10th quick, but at a deficit of 0.8sec, Milner was closer to the class leader’s pace than this afternoon.

In GT Daytona, there was an Audi 1-2, as Marco Seefried put Magnus Racing’s #44 machine just under 0.1sec ahead of Lawson Aschenbach’s Stevenson Motorsports entry. Alex Riberas was third in the Alex Job Racing Porsche 911,  with Jens Klingman fourth in the faster of Turner Motorsports’ BMW M6s.

Ex-GP2/IndyCar driver Stefano Coletti put the Starworks Motorsport #7 car an impressive 0.7sec ahead of Tom Kimber-Smith in the PR1/Mathiasen car in the Prototype Challenge class. The second Starworks machine of Renger Van der Zande was a further 0.1sec in arrears, ahead of a third Starworks machine, piloted by Richard Bradley.

There will be a fourth practice session tomorrow at 10.15am ET, with qualifying starting with the GTD class commencing at 3.30pm ET.