Porsche’s Laurens Vanthoor will start the GT-only round of the IMSA WeatherTech SportsCar Championship at Virginia International Raceway from pole position after topping qualifying by 0.078s ahead of Corvette Racing’s Jan Magnussen.

The track was dry with damp patches for the start of the GTLM session, with all cars on slick tires.

Ford’s Joey Hand was in the top spot before Vanthoor grabbed it back with 1m40.630s. Magnussen grabbed second with a last-gasp flyer, just missing out on pole by 0.078s while Vanthoor had already bailed out into the pits, with Ryan Briscoe’s Ford GT an identical margin back in third.

“The first couple of laps you’re figuring out where the track is dry and when to use the tires, so it’s a little bit like poker,” said Vanthoor. “They told me I was safe [in P1], I said, ‘Are you sure? I’ve got another tenth in me’, but they made the call to pit.”

Hand slipped to fourth, ahead of Oliver Gavin in the second Corvette. In the second Porsche, Nick Tandy went off and hit the tires at Oak Hill Bend. He will start down in sixth, ahead of the BMW M8 GTEs of John Edwards and Connor de Phillippi. 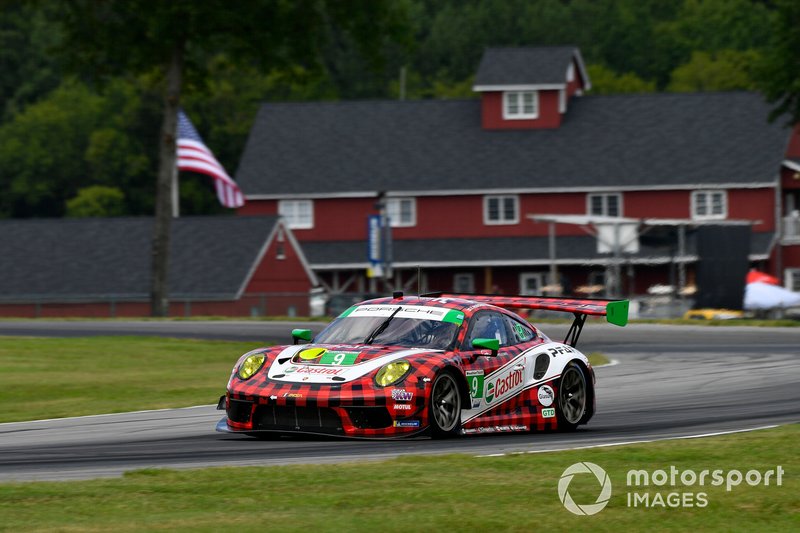 GT Daytona qualifying began in much more slippery conditions, with the majority of teams opting for slicks. The #14 AIM Vasser Sullivan Lexus of Richard Heistand went off on its out lap, proving how treacherous the track surface was for those on slicks.

With the conditions improving throughout, position changes came thick and fast throughout the session. Just before the clock ticked down to zero, Zacharie Robichon was at the top of the times in his Pfaff Motorsports Porsche 911 GT3 R.

As the checkered flag flew, Frankie Montecalvo then grabbed the top spot in #12 AVS Lexus – but Robichon took class pole back with his final flying lap, a 1m45.826s, as he was the last of the frontrunners on track and took full benefit of the evolving track.

“Credit to the team for making the right call, so we got an extra lap on everyone else,” said the Canadian. “It was exciting, the car was moving around a lot. Just like driving back home on the ice!”

His fastest time was 0.324s quicker than Montecalvo, with the sister Lexus of Heistand qualifying third after its early off.

What road cars did F1’s stars drive to the Hungarian GP?