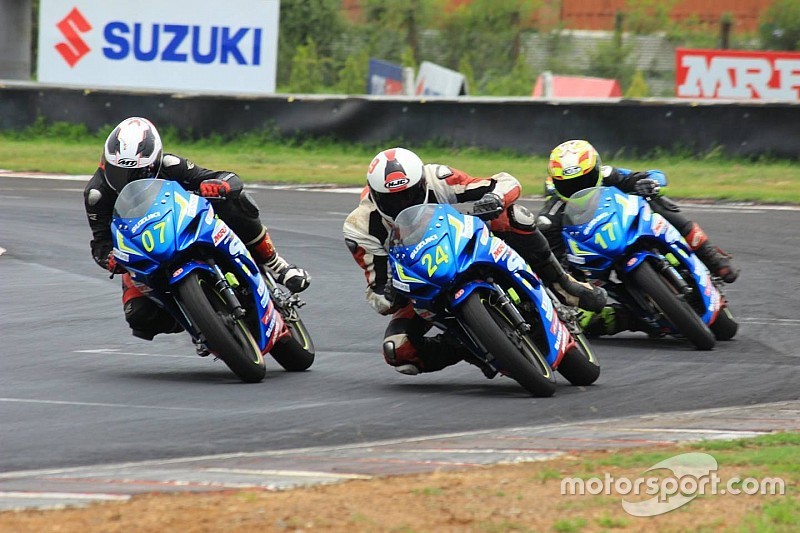 Meka Vidhuraj maintained his upperhand in both the Suzuki Gixxer Cup races in Round 3 of the one-make championship, at Madras Motor Race Track.

Starting on pole Rajinikanth B had a bad getaway losing his lead to Vidhuraj who started from the second row of the grid.

But Rajinikanth immediately fought back and got the lead with Vidhuraj then playing the waiting game until the last lap of Race 1.

The Andhra rider in a last-gasp attempt went past Rajinikanth on the final lap to win the Open category’s first race of the weekend.

Prabhu V completed the podium with Udipta Rath in fourth, the latter having made up four places starting from eighth.

Behind, both Shyam Shankar and Aman Kulkarni made headway in the race to finish fifth and sixth respectively, separated by mere 0.557s over the finish line.

Padmanaban S was seventh, just managing to hold off Vishwadev Murleedharan by 0.037s in the end.

In the Novice category, Joseph Mathew took dominant win from pole in Race 1 with Antony Peter and Clinton Cordeiro completing the rostrum.

Mathew then went on to win Race 2 as well from Peter, as Alan Fernando held off Cordeiro for final podium spot.

Meanwhile in the Red Bull Road to Rookies Cup, Aaron Gunaderan stormed to win by over 23 seconds from Sachin Choudhary in second, as AS Alexander finished third.

After an intense battle in Race 1, the second race on Sunday was another close three-way fight between Vidhuraj, David and Rajinikanth.

The trio exchanged places throughout the race, but it was Vidhuraj who kept David at bay by amere 0.11s over the line to claim victory.

Rajinikanth rounded off the top three, as the riders were only separated by 0.182s at the end of the six-lap race at MMRT.

The battle for fourth was heating up behind with Padmanaban keeping his nose ahead of Prabhu and Rath in a race long tussle.

Kamran Dubash and Murleedharan were seventh and eighth respectively, with Kulkarni and Sandeep Baynes completing the top 10.

In Novice category, Matthew made it three in a row with Race 3 win with Peter second and Amarnath Rajan third.