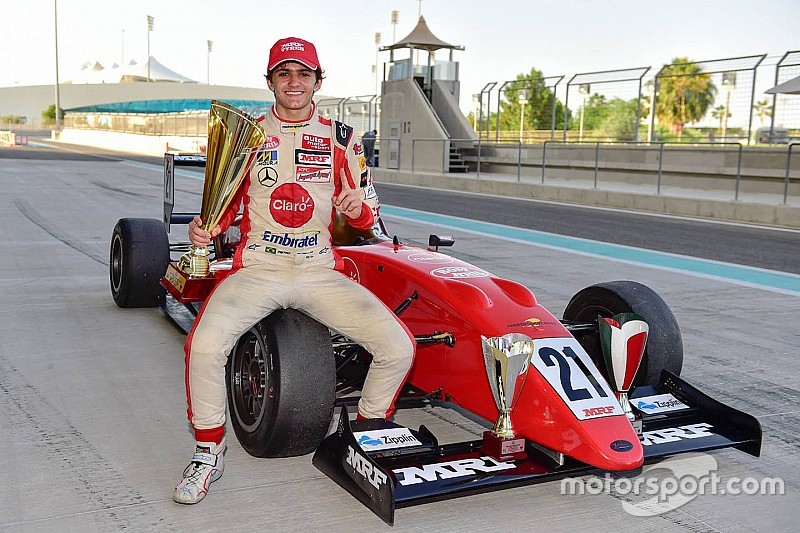 Pietro Fittipaldi’s consistency in the 2015-16 MRF Challenge championship proved crucial for the Brazilian to clinch the title in the season finale in Chennai.

In its fourth year, the MRF Challenge is establishing itself as a prime destination for drivers from top European single-seater series to keep themselves sharp during the off-season.

It started as a three-round season primarily in India, but the series staged its first international race in Bahrain in 2013-14, before visiting Qatar in 2014-15, and then Abu Dhabi and Dubai in 2015-16 to make itself a worthy international championship.

And, in Pietro Fittipaldi, who follows in the footsteps of Conor Daly, Rupert Svendsen-Cook and Toby Sowery after being crowned in the Chennai season finale, the championship has its most high-profile champion yet.

How the title was won

While Honda protege and GP2 racer Nobuharu Matsushita dominated proceedings in the first round at Abu Dhabi with two lights-to-flag wins, Fittipaldi got his campaign off to a strong start with a vital win and three podiums.

And with Matsushita - along with Jake Dennis, who scored two podiums at Yas Marina - not appearing for the rest of the season, Fittipaldi was handed the unofficial lead in the standings.

Behind the Brazilian, another F3 convert in the form of Tatiana Calderon established herself as a contender by picking up three podiums, while the relatively unknown Nikita Troitskiy, a graduate from SMP F4, made his mark with a shock win.

More surprises were to come in Bahrain however, when Alessio Picariello - a former champion in ADAC Formel Masters - made his debut and swept the board with a pair of victories.

Two further wins for the Belgian in Dubai turned the title fight into a true four-way contest, with  Fittipaldi and Calderon strengthening their positions a win apiece, but Troitskiy losing ground after being disqualified from third in the final race for running with an illegal ride height.

Heading to the Chennai season finale, 18 points separated Fittipaldi and Calderon at the top of the table, with Troitskiy and Picariello heading to India 31 and 34 points adrift respectively.

If Picariello had been the undoubted star in Bahrain and Dubai, Fittipaldi stepped up his game in Chennai, taking his first pole and taking a step closer to the title.

But it could have been a very different story if Calderon hadn't made a critical error during qualifying - and in hindsight, the Colombian admits this is where the title was lost.

"When I saw that Pietro was on pole, it was really frustrating," Calderon recalled. "Grid position is king around Chennai, so [starting seventh] I knew it was going to be nearly impossible to close down the gap between us."

Calderon's chances were then dealt a fatal blow in the second Chennai race after a tangle with Mick Schumacher, and a win in the penultimate race of the weekend sealed the deal for Fittipaldi.

"We had a good weekend in Abu Dhabi, I won a race over there, so I was confident that we can win - but you can never be too confident," said the 19-year-old after his title victory.

"But after all the hard work, I was able to win the championship - it was good to finish off the season with two wins in Chennai, so I am really happy."

Calderon then turned her attentions to defending the runner-up spot from Troitskiy, who had inherited a fortuitous win in the second Chennai race as Tarun Reddy and Picariello clashed while disputing the lead and Schumacher punted Calderon wide on two occasions.

The Colombian brought her A-game to the final race of the season however, as she soaked up pressure from Troitskiy and Fittipaldi to finish third - keeping her record of scoring at least one podium finish per round intact and sealing second in the points.

"I was really happy with the result," she said. "When I took a plane to Abu Dhabi, I didn't know what to expect, but it turned out to be the best decision we could have made to do the whole championship.

"I improved my performance with all the rounds, I think I even surprised myself, and to be second in the championship is a great achievement," she added.

Behind Troitskiy, who fell eight points short of Calderon in the fight for second, Picariello ended up fourth overall, having supplied yet further evidence of his speed with a dominant victory in the final round of the season.

"I was quite surprised with Picariello, he was really quick straight away," said Calderon. "He didn't do all the rounds and was still fighting for the title, so I was quite impressed by him."

The top five in the points was rounded off by Harrison Newey, who endured something of a slow start to his campaign in Abu Dhabi before taking a fine fourth place in Bahrain.

He came close to a race win in Dubai before he was disqualified from the final race for failing to serve a drive-through penalty - which he earned for jumping the start - in time, but his hat-trick of second place in Chennai perhaps earned him the title of 'most improved' driver in the season.

"On the whole, the MRF series has been terrific for me," said Newey. "I have been racing against some much more experienced drivers and that has been a very valuable and interesting experience."

Newey's ADAC F4 teammate Mick Schumacher, was the other star performer in Chennai, taking two podium finishes in his debut weekend in the championship.

Despite his tangles with Calderon, the 16-year-old did a solid job considering his inexperience both of the track and the Formula 2000 car, coping well with the inevitable pressure his surname brings.

"There is a huge competition [in the series] for sure, the drivers are really experienced," said Schumacher. "It's great to drive with them, to get the experience."

Among the other drivers to register a top three finish over the course of the season, Russia's Nerses Isaakyan and Britain's Max Fewtrell both impressed, picking up a third place apiece in Dubai and Chennai respectively.

Combined with a number of other solid points finishes for both, Isaakyan finished eighth overall, while Fewtrell, in only his first year in single-seater racing, ended 11th, tied on points with Schumacher.

India's Tarun Reddy had a patchy season, twice coming close to winning when his luck ran out, ultimately finishing a modest seventh in the points behind Matsushita.

In the second Dubai race, he took victory on aggregate times before a driving standards penalty demoted him to 12th, while he led for much of the second Chennai encounter before coming to blows with Picariello.

Of the other Indians, Arjun Narendran picked up a solitary point in Chennai, while F1600 champion Karthik Tharani showed promise but missed a sure shot at points on a few occasions.

F2000 regular Dylan Young scored a fine sixth place in Dubai on his way to 13th in the standings, the Australian's best result being matched by fellow series returnee Laura Tillett.

"I started off the season with a few bad rounds, and then in the last round in Dubai I got a sixth place, which I was really chuffed with," said Tillett, who finished 16th overall in her third MRF season.

"This year there has been some brilliant talent, so it’s been really tough. To get a sixth place at Dubai was a big achievement, because it was against some brilliant drivers."

Finally, Giuliano Alesi was only present in Dubai, where he combined strong pace with a couple of unfortunate clashes - before missing the Chennai finale altogether due to visa issues.

Analysis: How young Indians can climb the motorsport ladder