Rubens Barrichello told Autosport.com today that he will be leaving KV Racing at the end of the 2012 IZOD Indy Car Series season.

The all-time leader in Formula 1 starts, Barrichello has suffered through a trying initial Indy Car campaign that has seen him earn five top-ten finishes in his 11 starts. Three of those came in the first four races, and his season-best finish of seventh came at the short oval in Iowa. 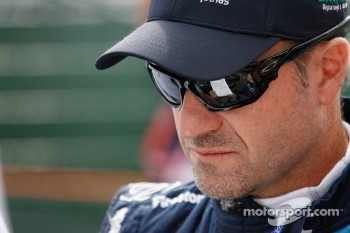 “I don’t like being 15th, and I am working myself up,” Barrichello told AUTOSPORT. “I’m getting better in comparison with my team-mates, but my car is still not. And the strategy side still hasn’t clicked.

Barrichello has led three laps on the year and is mired in 17th in the point standings, one point behind Charlie Kimball and one point ahead of Alex Tagliani.

To be fair, the Barrichello program came together extremely late in the 2012 preseason, but the former F1 star is already looking to better his lot for next season

“I’m fairly open to [KV owners] Jimmy [Vasser] and Kevin [Kalkhoven]; they gave me a car, and we had a situation where the deal was done in the last 20 minutes. But I’m here to win,” Barrichello said to the British racing magazine. “Now that I have done IndyCar, I want to do it better, because I don’t think I was able to do what I am really capable of for one reason or another. And since I do this because I enjoy doing it, I might as well come back.

Does Marco Andretti deserve his ride?