INDIANAPOLIS, Ind. (March 14, 2002) -- Fern?ndez Racing Co-owner and Managing Director Tom Anderson today announced that Gustavo del Campo has been hired as team manager. Del Campo begins his new role today, taking over the position formerly held by Bob "Buckwheat" Adie, as the team prepares for Round Two of the CART FedEx Championship Series to be held on the streets of Long Beach, Calif., April 14. 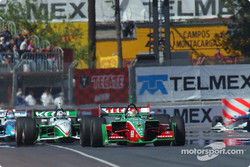 "I am very pleased to have Gustavo join Fern?ndez Racing in the capacity of team manager," said Anderson. "Gustavo brings with him a tremendous wealth of experience and a fantastic relationship with Adri?n. It is also a valuable asset that we have someone of his mechanical experience that speaks fluent Spanish working daily with our team here in Indianapolis. I believe this will help bring our sponsors Tecate, Quaker State and Telmex even closer to the team.

"I have already seen that Gustavo has a great desire for structure and success. Together, we are looking forward to the future success of Fern?ndez Racing."

Born in Mexico City, the 48-year-old del Campo has been involved in motorsports for 22 years both as a team manager and chief engineer. He most recently worked in the Dayton Indy Lights Championship Series, serving as team director/engineer for the Mexpro Racing Team with drivers Rudy Junco and Derek Higgins during the 2000 and 2001 seasons, and Team GO Motorsports with drivers Jorge Goeters, Mario Dominguez and Higgins in 1998 and 1999.

"This is very, very exciting for me," said del Campo. "I have known Adrian for many, many years. I worked directly with him once in 1992, when he came to Mexico to help my team out by filling in for our driver Carlos Guerrero in Formula 3. Adri?n won that race, and I still have the trophy. I am very honored to be a part of this team, a team that has the potential and talent to become a championship contender."

Del Campo had worked in the motorsports community in Mexico since 1980, beginning his career in Formula Ford competition with the Marlboro Racing Team and driver Bernard Jourdain.

"I have known Gustavo for over 20 years," said Fern?ndez. "We competed against each other in the different series in Mexico. I have always had a lot of respect for him. He is very dedicated and has achieved a lot of success in his career, both in Mexico and here in America. I am very excited to have him as part of our team."

Fernandez: Local driver will be crucial to IndyCar success in Mexico

Adrian Fernandez has corner named after him in Mexico City