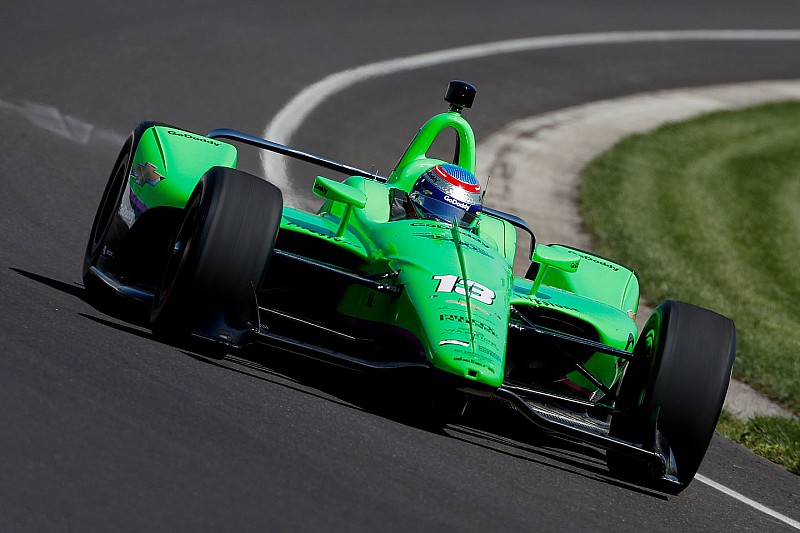 After her Refresher test at Indianapolis Motor Speedway, Danica Patrick said that she was only just starting to follow her instincts regarding the handling of an IndyCar, but was surprised by the effort it took to steer it.

Patrick, who has not raced an IndyCar since the calamitous 2011 season finale at Las Vegas Motor Speedway, is famous for starting and finishing fourth and leading on her Indy 500 debut in 2005, becoming the first woman to score an IndyCar win (Motegi 2008), and for scoring six other top-three finishes including at Indy in 2009.

She switched to NASCAR for six years, 2012 through ’17, but last November announced her final professional races would be this year’s Daytona 500 and Indy 500.

Returning to open-wheel cars today in an Ed Carpenter Racing-Chevrolet, Patrick turned 52 laps, but had a false start when high water temperatures forced the team to take the car back to the garage after just one slow installation lap. After 80mins, the #13 GoDaddy-sponsored returned to the track, and Patrick eventually clocked a fast time of 218.500mph, and passed IMS’s obligatory Refresher course.

Describing getting back up to speed, she said: “Then it was out one time, coming in just to make sure everything was OK. Then the next run was just too slow. It wasn't above 210[mph].

“The car, it just felt very hard to drive. The weight of the wheel was very heavy for me. So I don't know what the heck I've been doing because I feel a lot stronger than when I was here before. You have to see the videos; I crushed it like crazy. I can pick some weight up. But I did not feel very strong out there.

“My old engineer Matt [Barnes] ran me today. He made it easier to drive. It's still not by any means where I want it, but it was enough that we could complete today. With 30 minutes to go and five laps of the second phase and 15 laps of the third phase together, I'm like, ‘I don't know if I'm going to get through this today.’

“But I stayed out there and I did all those 20 laps to complete it all. It felt fine. Actually felt fairly comfortable at that point in time for the level of discomfort with the way the wheel felt, and with the amount of front aero we took out of it to lighten the wheel up for me.”

Patrick explained that the swift remedy to lighten the steering load – reducing the amount of front aero – had limited her ability to go as quick as she wished, but had provided more feel.

“It was definitely a little too much understeer to go really, really fast, but it was enough to complete the day and move on for tomorrow. I felt like I was able to feel the grip limit of the car, especially the front, of course, because we took so much front aero out. I was really able to feel the front sliding pretty well. That's good for me. Tomorrow it will feel even more comfortable.”

“But I've been waiting to get this day over with for a long time. I say that with love. I want to get through that so I can get to the fun part, which is really running, making changes, making it faster, feeling really comfortable.”

Patrick admitted that driving an IndyCar again was not yet instinctual.

“I definitely feel still overwhelmed enough with everything going on, just driving, the helmet moving, all kinds of things going on. I'm not looking in my mirrors, checking my dash all the time, moving buttons around. I'm not there yet. I did move the front bar around a little bit when I was out there. I did do a couple other little things. Just start simple."

Asked about her comfort level back in 2005 when she was a rookie at IMS, Patrick said: “There were times where I was driving off the belief that everything was so locked down for me that nothing can really go wrong with the back of the car, just drive through it. I thought to myself, I've built my career on trusting my ass. I think that's very important here at Indy, is to not drive beyond what you feel is possible with the car because it will bite you. Your gut is usually right. The feel of your butt is right.”

Regarding her aims for tomorrow’s manufacturer test, Patrick said the idea was to be “flat out and comfortable, making changes, feeling the changes.

“I think that once I'm flat out the whole way around, I'm feeling comfortable, feeling the changes, you can really work from there.”

Karam: The best I have ever felt after Day 1 at Indy