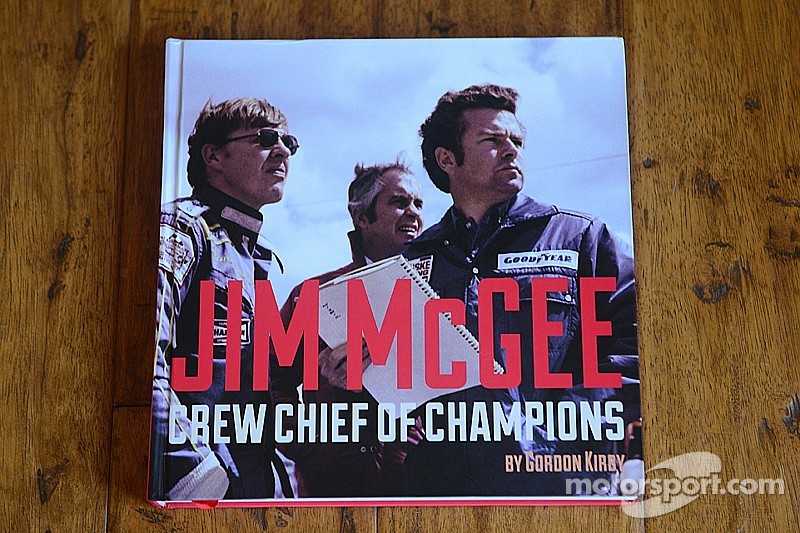 Motorsport.com's Anne Proffit takes a look at an Indianapolis based books released this year, and give an idea of which gear head in your family would want it for Christmas.

The days are getting shorter, the holidays are right around the corner and there’s no major racing to partake in for the remainder of 2015. What’s a race fan to do? Sure you can look at old videos, watch some races you taped for just this purpose. I propose some reading material that can whet the brain for what’s to come in 2015 and address Indy car racing’s most colorful characters and its grand successes.

This year at the 98th Indianapolis 500, Racemaker Press and author Gordon Kirby debuted the third epic tome in an American Racing History series. “Jim McGee: Crew Chief of Champions” is a coffee-table, hard-bound book all about one of the most prolific crew chiefs in IndyCar history - and let’s not give that a past tense as McGee worked with Chip Ganassi Racing during the 2014 Verizon IndyCar Series season to amplify the results of driver Ryan Briscoe.

McGee’s work throughout the years has yielded victories, championships and occasional heartbreak. What Gordon Kirby has managed to extract is the essence of this man, a natural leader who would have been successful in any endeavor. Along the way, Jim McGee has worked with some of the finest teams and team owners in Indy car history: Clint Brawner, Andy Granatelli, Vel’s Parnelli Jones, Bob Fletcher, Roger Penske, Pat Patrick (several times), Jim Hayhoe, Bobby Rahal and Carl Hogan, Paul Newman/Carl Haas (twice in IndyCar; once in NASCAR) and PKV Racing.

In each step he has left his mark and, as you might expect, has stories to tell of teams and drivers - and what it’s like behind the scenes. The 44 drivers McGee has shepherded through their careers is a murderer’s row consisting of the paramount over-achievers of the past 50 years: Mario Andretti, Eddie Sachs, Roger McCluskey, Jimmy Caruthers, Pancho Carter, Tom Sneva, Bobby Allison, Rick Mears, Bobby Unser, Gordon Johncock, Danny Ongais, Ganassi, Emerson Fittipaldi, Danny Sullivan, Nigel Mansell, Scott Pruett, Adrian Fernandez, Jimmy Vasser and Cristiano da Matta are just some of those who flourished working with McGee.

Throughout this book - 237 pages including indices - are Jim McGee’s stories, sprinkled with commentary from Andretti, Parnelli Jones, Pancho Carter, Mr Patrick and others that entrance the reader. The photography in this book should make you salivate, as well, with images from the McGee collection and from some of the finest photographers to hoist a camera and lens. Production values are exemplary and Racemaker’s presentation is amongst the best I’ve ever seen.

Jim McGee, Gordon Kirby and Joseph Freeman, owner of Racemaker Press have got to be proud of this accomplishment. Just getting McGee to sit still long enough to relate his stories asks for applause. And no, Jim McGee’s not done with racing, nor is it done with him. While the price of $75 might seem high, the literary drama, pathos and the more than 300 images contained in this book make for the kind of euphoria that will tide any racer over through to the first green flag of 2015. Just buy it.