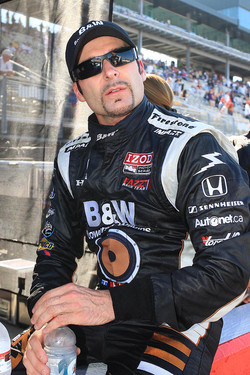 LEEDS, Ala. (March 15, 2011) – It’s been just two weeks since his own IZOD IndyCar Series team merged assets with Sam Schmidt Motorsports (SSM), but driver Alex Tagliani and team manager Rob Edwards are pleased to be off to a flying start after the season’s opening road course test at Barber Motorsports Park just east of Birmingham, Ala.

Tagliani turned the 12th-fastest lap of the two-day test in Tuesday’s final session – a lap of 1 minute, 12.8533 seconds (113.653 mph) – behind the wheel of the No. 77 B&W Dallara/Honda/Firestone Indy car for SSM. A total of 24 IndyCar Series competitors took to the 2.3-mile, 17-turn road circuit for almost 10 hours of track testing throughout the last two days. Tagliani logged 124 trouble-free laps during the two days among the 2,811 testing laps logged by all the competitors combined.

“It was a good test for us, overall, and I think we learned a lot this afternoon, especially,” said Tagliani, who is beginning his 12th year in major North American open-wheel racing. “There were some pretty interesting things that came out of it for us that are going to be really valuable for St. Petersburg. This morning, we tried something and we were obviously pretty out to lunch. But we recovered this afternoon with a much faster car. I went quicker right away on old tires, which was a good sign. It was an indication that our afternoon was going to be good.

“After that, we did some more trials on some different things. Some worked, some didn’t. And, by the end, when we decided to do our new-tire run after doing a 12.8 (1:12.8533) on old tires, I thought we could end up in the top-five or the top-six. But things got crazy out there with a couple of yellows as the session was ending, and we ran out of time without the chance to lay down that lap that I felt we had in the car. It’s a shame because it’s always good to put a good lap time on the board. But we come out of this test with a lot of information and good knowledge about what to do and what not to do. I think we learned what kind of a car we’re going to need when we come back here, and our weekend will be more about fine-tuning rather than changing the car a lot. And, I feel we’re a lot more ready for St. Pete.”

Last year, in only the third race ever for his FAZZT Race Team, Tagliani struggled in practice and qualifying at Barber Motorsports Park. He started 21st on the grid but was able to rally the No. 77 team to a top-10 finish, one of five such finishes for the first-year operation. Thus, the work that was accomplished Monday and Tuesday, and the positive results it generated, left the team feeling positive for the coming season.

“The two days went really well,” Edwards said. “This wasn’t our best road course last year, so we came with some information from the end of last year when we improved our game on permanent road courses, and also with a long list of other things that we wanted to get through. I’m just very happy we got through the things that we wanted to and, relative to the front (of the field), where we want to be, we also found a lot of speed. We ran through some live (pit) stops and other things getting us ready for St. Petersburg so, overall, I’m really happy. Being part of Sam Schmidt Motorsports, now, does two things for us. One, we now have a leader (team owner Sam Schmidt) that I think we all respect and are all excited about working for and representing. Two, there is a history of (Firestone Indy Light Series) championships to build on which, on one hand, puts a bit of pressure on the IndyCar side. But I think, long-term, it’s going to be great for the whole group to have the opportunities that having the IndyCar team and the Lights team working together will offer.”