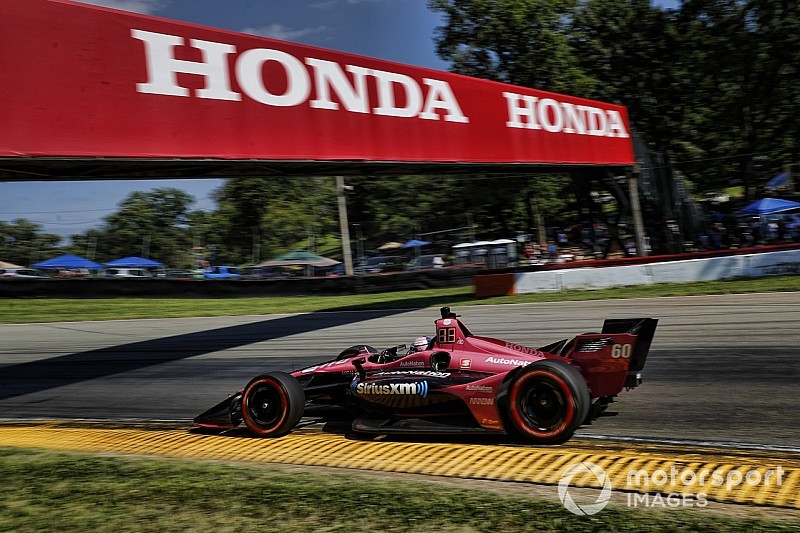 Michael Shank is seeking a new alliance with a Honda-powered IndyCar team while trying to ensure Meyer Shank Racing becomes a full time IndyCar squad in 2020. He spoke to David Malsher about his opinions, options and realistic ambitions.

Michael Shank is not a boastful man nor a man of artificial humility – he knows exactly where his team stands in motorsport’s macro perspective. But mercifully, he’s also not the sort of person to seek publicity or profit by masquerading as an underdog.

When Shank stated his aim to enter his team in the 2012 Indy 500 but realized he’d be lumbered with the baby-fart Lotus-Judd engines, he pulled the entries: far better to be absent than humiliated on motorsport’s biggest stage.

And when, after running HPD-powered Ligiers in IMSA’s prototype class for two years, Shank learned that the new DPi Acura ARX-05 project would be run by series returnees Team Penske, he didn’t waste time and energy feeling affronted. Instead, he leapt at the chance run the new Acura NSX program in the GT Daytona class. Mind you, if you believe in God and that He cares about motorsport, you may consider there was a divine presence at Road Atlanta in October 2016, when MSR signed off its time in Prototypes with victory at Petit Le Mans…

Meyer Shank Racing is now synonymous with those sexy NSX GT3s, but the Pataskala, OH-based team is also forging a strong reputation within the NTT IndyCar Series paddock. There was the affiliation with Jack Harvey and Andretti Autosport in 2017’s Indy 500; then a six-race run with Harvey and in partnership with Arrow Schmidt Peterson Motorsports in last year’s IndyCar championship.

This year the beautiful pink and black Meyer Shank Racing with Arrow SPM car will have completed 10 of the 17 rounds by season’s end, with the highlight so far being Harvey’s strong third in the rain at the IndyCar Grand Prix on the IMS road course.

However, things are changing for 2020. The partnership with Arrow, Sam Schmidt and Ric Peterson will be no more, as they have tied the knot with McLaren and, more significantly from Shank’s point of view, Chevrolet.

“I must say on the record that Sam, Ric, Jon Flack and Taylor Kiel [Arrow SPM’s team president and managing director, respectively] have done nothing but treat me like a brother,” says Shank, “so I knew about their plans a while ago, and I started having to look at my situation. But I can say it’s been nothing but a good experience across the board.”

Shank will be staying faithful to Honda Performance Development and seeking a new alliance with a well-established team. He spoke as openly as he could with Motorsport.com, notwithstanding the fact that there are still several parts needing to be locked in place regarding his 2020 IndyCar program. 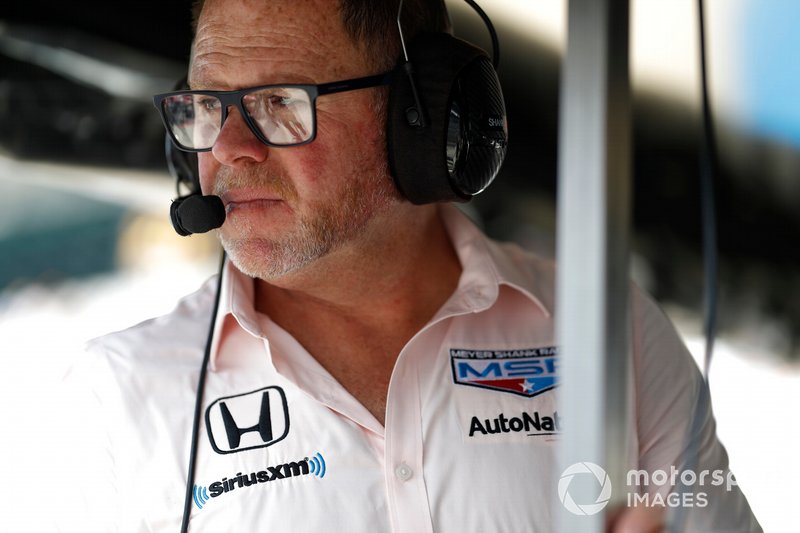 DM: When you learned of McLaren and SPM uniting and going the Chevy route, was there even a chance of you staying with them, or is your commitment to HPD absolute? Obviously you have your Acura NSX deal in IMSA to consider, but Roger Penske and Chip Ganassi have proven you can work with different manufacturers across multiple series.

MS: Those two guys can do things like that because they have a lot more years at a very high level than I do, and they command a respect that invokes an automatic trust among manufacturers that they are partnering with the very best at what they do. Me, I have to fight for every scrap of respect, all of the time.

In 2016, when I was running the IMSA Prototype program and Honda was thinking about entering the GT Daytona class with the NSX, it took every ounce of determination in me to prove to them that this team was capable. To get that deal, a lot of people within American Honda and HPD stuck their neck out for me, and that earned my faith and respect. So my situation with them is more than just technical; it goes deeper than that, there’s more family feel to it. That doesn’t necessarily mean we’ll be together always and forever, but I have a sincere loyalty to them for giving me an opportunity, and I don’t forget it.

So when the SPM McLaren Chevy deal came along, maybe there was some potential for me to stay, but I didn’t hesitate. I’ve got so much on the line with Honda and I feel like I owe them a little bit. Three years ago they stood up and said, ‘Mike, we believe you can do this [NSX program]’. And incidentally, Jim France did the same thing for me in my early sportscar days in what was then Grand-Am, and I don’t take that lightly, either. 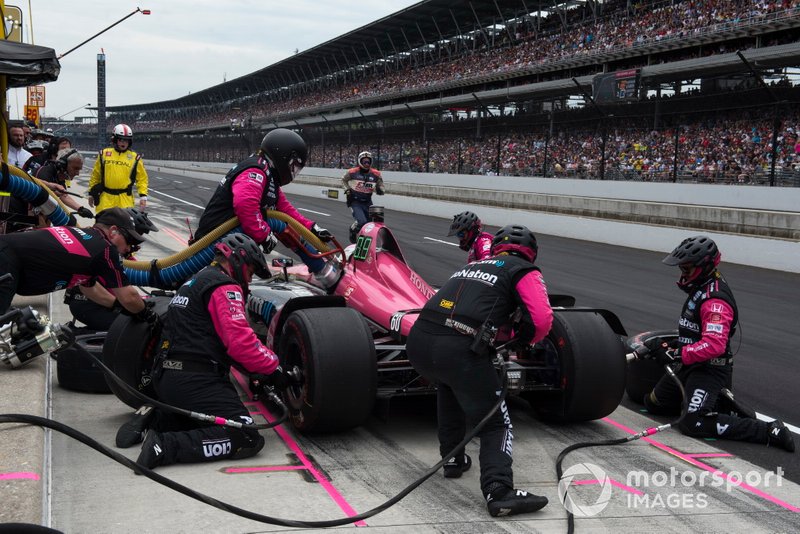 There seem to be quite a few extant Honda-powered IndyCar teams open to technical alliances – on or off the record, depending who I ask…

Yeah, pretty much everyone is open to it these days, whereas two years ago almost no one was open to it. The thing is, if the dollar amount is right, it can be a useful income for a primary team to be able to count on. Arguably, the net net gain can actually be close to the net net of running another car without having to do the heavy lifting, if you follow the math. So pretty much everyone Honda-powered is interested, and now it’s down to us to decide who we would need to partner with to get maximum zing out of the alliance. Each case is being examined very carefully, pro’d and con’d, really in-depth discussions. Lots of relationships and reputations are on the line here. It will be an exciting next few weeks, I can tell you…

Are these technical affiliations mutually beneficial for the established team and the new team?

I think it’s the way of the future, I really do, and I admit that I wouldn’t have said that two years ago when we first started with SPM. But after our great experience with them – and having seen other teams come along and do it on their own and prove exactly why I didn’t go that route! I’ve come to believe that it is a great business model.

I’m not saying I’m smarter than the others, I’m just saying that I know what our capacity is and to think we can come into the sport and be competitive without some help is not right. The team owners who are established in IndyCar have earned respect and put the time in; they’ve made it work.

So I shook hands on the deal with Sam, we drew up a fairly small contract regarding who does what, I paid him some money because all that IP has value, and we agreed that we would pull our weight because it’s important to not be a drag on the system. Well, for me it’s been perfection, and I think we brought value to the Arrow SPM team too.

Will there be a time when you want to strike out on your own and become fully independent – and maybe make MSR into one of those established outfits with which a new team wants to form an alliance?

Well, I still have an ego but I can’t say right now whether eventually MSR will go it alone. When we learned what was coming down the pipeline between SPM, McLaren and Chevrolet, we asked ourselves, ‘OK, is this the opportunity to break away on our own or do we form another technical affiliation?’ And we decided across the board that a technical alliance was the way to go.

That said, what DragonSpeed and Ben Hanley have done in effectively going it alone and getting themselves into the Indy 500… that’s the most ballsy thing I’ve seen all year! But that involves a lot of risk and it’s the kind of risk that I cannot take with my sponsorship partners – even if I do appreciate what DragonSpeed did.

Looking at who AutoNation supports besides Meyer Shank Racing – Ryan Hunter-Reay and Alexander Rossi – is it reading too much into things to say that, along with your dedication to Honda and a previous brief partnership with Andretti Autosport, an alliance with Michael Andretti is the obvious way to go?

I understand your assumption, but the funny thing is, each of those deals is there for a very specific reason to AutoNation, and they’re all different. They have different B2B relationships, different team relationships, so it’s not how it appears on the surface. Ultimately, all cars carrying AutoNation are trying to deliver results for them and deliver off-track, too, but there are different methodologies in play. 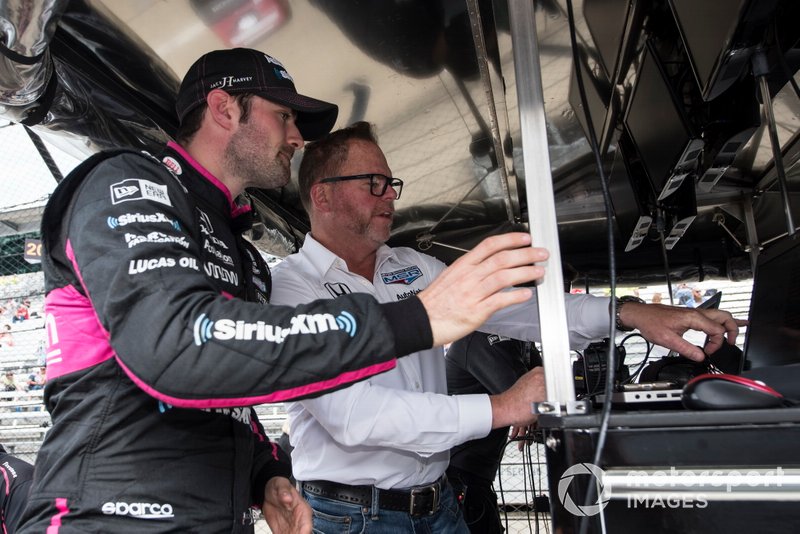 Notwithstanding James Hinchcliffe’s recent comments that he would be working with GM in 2020 – implying he’s going to see out the last year of his contract at Arrow SPM – his worth to American Honda and Honda Canada, along with some off-the-record intel, would suggest he’ll be in an HPD-powered car next year. I’ve also pretty much had it confirmed that Colton Herta will stay within the Andretti Autosport ‘family’, regardless of the Harding Steinbrenner entity continuing. Would you be interested in Meyer Shank Racing partnering with Michael Andretti to run a fifth and sixth AA car for some combo of Herta, Hinch or Harvey?

Let’s break it down this way: My program is built around Jack Harvey and we’re going to give him a well-deserved full-time opportunity if – going back to what I said earlier – I can put all the puzzle pieces together.

I have been approached about running other people as a teammate to Jack, and I have stated across the board and I that I am not in a position to do that. I’m not willing to go to two cars until we’re really solid. We’ve done exactly what we said we were going to do – build it up slowly, raise money, race when we can, and not race on my credit card! Right now, we haven’t got our financial deal totally done yet, but it’s looking very promising and we hope to announce something in the next four-to-six weeks. My primary concern for 2020 is to put Meyer Shank Racing in the best position possible to win races and deliver for all our sponsors.

So Meyer Shank Racing’s priority for 2020 is to progress from entering 10 IndyCar rounds in 2019 to running one full-time entry, rather than running two cars part-time – or two cars full-time but half-assed…

Yes, that’s exactly what I’m saying! And I can see in the future being able to run two cars full time, but the truth is that even in my grand scheme, I see two as being our maximum. I don’t need to grow to three cars or four cars. Ultimately I want two quality programs, and then I’ll have felt like I’ve done what I can do at this level of the sport.

But like I say, that time for two cars isn’t now. I have what I consider a large sportscar program with Honda/Acura which is very important to me, and I don’t want IndyCar to drain from that technically or physically, so I’m definitely not ready run two IndyCars.

In the past 15-18 years across IndyCar, Champ Car and IMSA, I’ve watched too many teams come and go. I’m doing everything in my power to not look into the eyes of the devil and get hypnotized by thoughts of a potential windfall or potential profit. We do own two IndyCars, but we’re not quite ready to run them simultaneously.