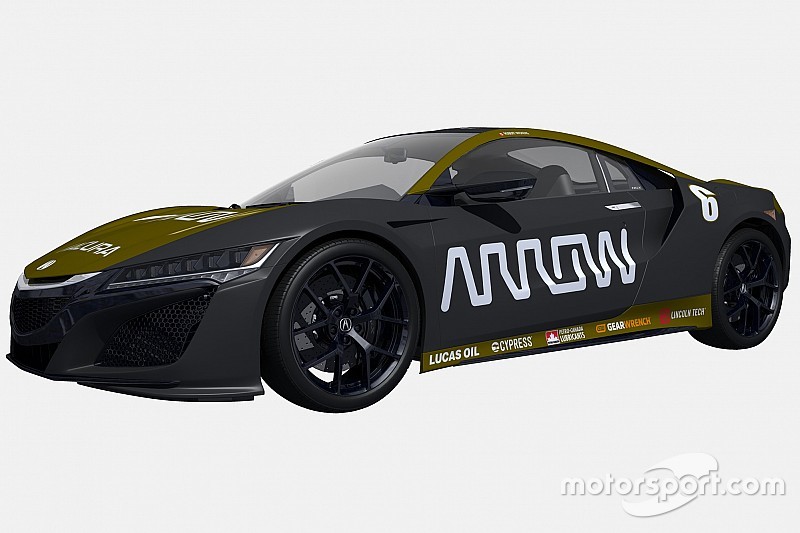 Robert Wickens will drive an Acura NSX equipped with hand controls at this weekend’s Honda Indy Toronto, 11th round of the 2019 NTT IndyCar Series, with the necessary modifications made by his Schmidt Peterson Motorsports team’s partner Arrow Electronics.

It will be the first time the 30-year-old Canadian has driven in public since his career-halting shunt at Pocono Raceway last August that has left him recuperating from spinal cord injuries.

Wickens told Motorsport.com: “I had this idea in January and spoke with Arrow and they were very interested because this is a demonstration of what they do – using technology to improve people’s lives. And so in March at St. Petersburg [when Wickens returned to the NTT IndyCar Series paddock for the first time since his shunt] I had a meeting with Arrow, Honda Performance Development [HPD] and the Arrow SPM team and we came up with this ‘masterplan’!

“Obviously I was hoping to get it done for Toronto, given that it’s a Honda-sponsored race and it’s my home race, but I’m honestly surprised it has happened so quickly. The system is not quite as complex as what Alex Zanardi uses, given the time frame we had once it had been cleared for Honda to deliver the car to Arrow. But that’s also what is impressive – we’re basically using a customer product by Arrow, and this is just Phase 1. The throttle is a ring around the steering wheel with a hand operated brake.

“But we have big visions for the future,” he continued, “and I want to use this NSX for practice. I want to get more and more familiar with hand controls and figuring out what works and what doesn’t work.”

Wickens, who has been documenting his rehabilitation process on Twitter and Instagram, was keen to stress that using a car with hand controls is not a substitute for as close to full recuperation as he can achieve and to walk unassisted as soon as possible.

“As far as I’m concerned, the two processes are interconnected,” he said. “Obviously I can sit and drive a racecar with hand controls. But the dream is to get both legs to where I don’t need hand controls, and if I’m able to get both legs back to that extent, it means I’m walking. That’s the end goal.

“But realistically, if I can get one leg operational so I don’t need both throttle and brake on the steering wheel, that would be a huge deal. So I think we just have to see where it goes. Nerve regeneration takes two years before it plateaus – but there are so many people out there who are defying odds and redefining what’s possible, so you have to keep pushing yourself.

“At the same time, I don’t want to rush anything because life is more important than work and so getting a better longterm future is smarter than getting back into a racecar too soon.”

Wickens, who will get to practice on the 1.786-mile Toronto course at Exhibition Place before leading the parade lap ahead of the Sunday race, said: “It’s really exciting and also slightly surreal. I’ve driven since the accident to get my hand control certifications to drive on the road. I did that back in December, so I’m planning to get a modified car in Indianapolis so I can be independent again.

“But this will be fun and I’m a little bit worried that once I get a feel for it again, I might be in too much of a hurry to make an earlier comeback! But seriously, I’m staying pretty level-headed about it and I’m fortunate to be progressing pretty quickly. This is validation and encouragement that the hard work is paying off.”

Ted Klaus, president of Honda Performance Development in Santa Clarita, CA, told Motorsport.com he was excited by the project as soon as he met with Wickens at IndyCar’s season-opener in St. Petersburg.

“It was Robbie’s idea, and we met with him in March at St. Pete,” Klaus recalled, “before I took over from Art St. Cyr [as HPD president]. It was Art, myself and T.E. McHale [American Honda motorsports communications manager] along with Jon Flack [Arrow Schmidt Peterson Motorsports president], and Robbie’s manager Len Gaik. We were impressed with Robbie’s perpetual positive attitude. He was saying, ‘This is a way for me to be fully engaged in life, it will have recuperative value and it will be the next step back toward getting me in a racecar. It’s just a step.’

“Our company is all about technology and service to people, and when you’re out there on track racing, that’s not always easy to convey. But this project resonated instantly with us, with Arrow, and with Arrow SPM. I have to say, it was quite easy to say ‘Yes’.”

The NSX that Wickens will drive on Sunday is not a competition model, such as the GT3-spec raced by Meyer Shank Racing – an IndyCar partner team with Arrow SPM – in the IMSA WeatherTech SportsCar Championship.

“This Acura NSX is a car selected from our fleet at American Honda,” said Klaus, “and we turned it over to Arrow Schmidt Peterson Motorsports for Arrow to start making the conversion with the team. We had the vehicle, Robbie had the passion and idea to make it come together, and the timing was perfect.”

Klaus, who was chief engineer on the NSX program before becoming president of HPD, also dispelled the notion that this will be a publicity stunt.

“It’s not a marketing gimmick,” he said. “The fact that we’re at his home race and it’s an event sponsored by Honda… that’s great, but we’d have been just as proud and gratified if this had been happening at Portland. Helping one of our Honda ‘family members’ finding renewed purpose in the process of his recuperation provides its own immense satisfaction.”

Joe Verrengia, Arrow’s global director for social responsibility, told Motorsport.com that the Denver, CO.-based company is taking great pride in being able to help Wickens “start performing a version of what he used to do.”

Verrengia said: “When he got hurt and his rehabilitation began to unfold here in Denver, at Craig Hospital, we all kept in touch and when he started to make serious progress he made it clear that he expects to drive again and we had already done something similar for Sam [Schmidt, co-owner of Arrow Schmidt Peterson Motorsports] with our SAM car [semi-autonomous motorcar] although obviously that was at a different level given Sam’s injuries. Fortunately Rob has full use of his arms and his hands and he has stability of his upper body, his trunk and his core. So we worked on what he was most comfortable with, and devised a system to suit, in order to get him back in a car.”

Given the time constraints and Wickens’ greater mobility, Arrow has equipped the NSX with a less sophisticated package than found in Schmidt’s Corvette.

Explained Verrengia: “There was a similar philosophy with Rob in terms of assessing what he could do, and figuring out what would best enable him to drive fast but well, and safely.

“For this application, we were able to use equipment bought ‘off the shelf’, and actually that was true of Sam’s car, too. It used technologies that already existed but which had not previously been made to work together for that purpose. It needed our software to program it, to integrate the technologies for that specific application. And that’s our philosophy – to take off-the-shelf products and innovate with them.

“To get the Acura NSX ready for Rob in Toronto, we approached a specialist hand-control company called Guidosimplex that provides a throttle package that allows him to apply and adjust the throttle while steering. It needs to be tuned for each individual car, and that’s something we can do.

“Fortunately the NSX has paddle gear-shifters. We did once develop hand controls for a stick-shift Corvette where the hand of the driver triggered the disengagement of the clutch by passing in front of an infra-red sensor as he reached for the next gear. Between that and operating the throttle on the steering wheel and using hand controls for the brakes, as you can imagine there were a lot of hand movements going on in that cockpit! So having paddles as standard on the factory NSXs from Acura was a big help in this case!”

Verrengia also confirmed that Arrow is planning to work with Wickens for further development of the hand control systems and applying them to a racecar.

“Ultimately, the purpose is for us to develop a system whereby he can drive not just in a demonstration but to compete again, because we know that’s his goal. And that’s really different from what we were doing with Sam because he was now a team owner and just wanted his mobility again – to be able to drive on the road and occasionally perform demos on track.

“Rob is far earlier in his career and there’s more that we can do for his medium-term future. That’s what we’re working on.”

Stars take to the red carpet for Heroes film premiere