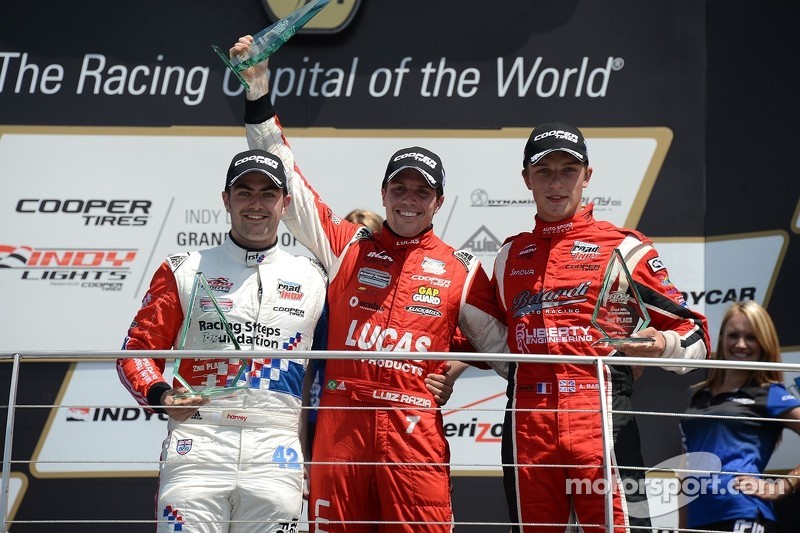 Speedway, Ind. - After taking a little time to get to grips with his new surroundings, Brazilian Luiz Razia drove an exemplary race under constant pressure in today's Grand Prix of Indianapolis to score his first victory in Indy Lights Presented by Cooper Tires. It was also the first win of the year for four-time defending champion team Schmidt Peterson Motorsports with Curb-Agajanian.

After the first attempt at a start was waved off and then an early caution period due to an incident between Juan Piedrahita (Schmidt Peterson) and Zack Meyer (Team Moore Racing), Razia just managed to fend off an attack from Harvey at Turn One. It was to set the tone for the remainder of the race. Behind, too, there was action as Andretti teammates Brabham and championship leader Zach Veach tangled wheels not once but twice within the first few laps. 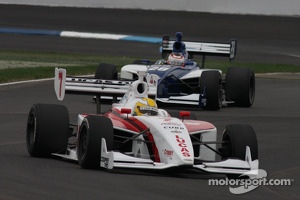 When the dust had settled from the early skirmishes, Razia, from Barreiras, Brazil, and Harvey, from Bassingham, England, continued to circulate within a few car lengths of each other. Belardi teammates Baron and Gabby Chaves were a second or so farther behind, chased by Scott Anderson who made a fine start for Fan Force United to move into the top five. Brabham and Veach were hot on his heels, too.

Veach overtook Brabham for sixth on lap 13, only for Brabham to return the favor on Lap 20. Three laps later, Brabham also slipped past Anderson, then homed in swiftly on the two Belardi cars. Chaves was Brabham's next victim, on lap 32. Brabham set the fastest lap of the race with just two laps remaining but Baron just managed to hold onto his podium placing.

Veach also was on the move in the closing stages. He passed Anderson at Turn One on Lap 35, but tangled with Chaves while attempting an outside-line pass at the same place just a couple of laps later. Anderson took advantage, slipping past both of the title rivals to finish a career-high fifth, followed by Juan Pablo Garcia (Schmidt Peterson), then Veach and Chaves.

The RePlay XD Move of the Race Award went to Brabham for his Turn 1 pass on Chaves after the green flag.

The championship is now finely poised, with Razia moving to within five points of Veach's championship points lead, 229-224. Chaves has been relegated to third on 215 points, followed by of Brabham on 207 as the Indy Lights field reconvenes on the legendary 2.5-mile Indianapolis Motor Speedway oval for the Freedom 100 during the Indy 500's Carb Day festivities on Friday, May 23.

Luiz Razia, #7 Lucas Oil with Curb-Agajanian (Schmidt Peterson Motorsports with Curb-Agajanian): "There was a lot of pressure. Jack [Harvey] had a car that was a little bit better than me for some reason. Our cars were the same but for some reason he had the pace, but I was able to hold him off and I don't know how I did. I think I was blessed today to win this race and I feel great. The time in the race was not going by at all. For me, it felt like two hours. I just tried to keep corner by corner, shift by shift and just really live in the moment. I could keep the pace and take the win."