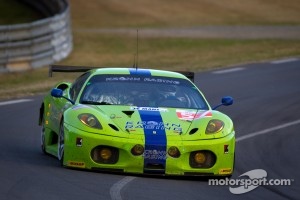 The Krohn Racing team heads for the 6 Hours of Silverstone race on September 11 ready to challenge the other GTE-Am class teams for a full slate of race points. Team owner/driver Tracy W. Krohn and co-drivers, Nic Jönsson and Michele Rugolo, will be making their best effort at achieving another victory in the 2011 Intercontinental Le Mans Cup (ILMC) Series.

Currently sitting second in the ILMC GTE-Am point championship and 27 points out of first place with three races to go, Krohn Racing needs to collect every point possible to oust the current points leader, the French Labre Competition Corvette team.

Krohn, of Houston, Texas, Jönsson, of Sweden and now living near Atlanta, Georgia, and Italian Michele Rugolo, won the first ILMC round of the 2011 season at the 12 Hours of Sebring, catapulting them into the GTE-Am point lead. An fifth place class finish at the 6 Hours of Spa with the Krohn/Jönsson duo still held them in contention, but a DNF at the 24 Hours of Le Mans dropped them to third in the inaugural season point chase. The trio collected fourth place class points at the dramatic 6 Hours of Imola race in Italy.

With numerous guests expected at Silverstone to cheer on the Krohn team, they hope all the energy will be the added benefit to gain points and close the gap for the ILMC GTE-Am championship.

Once again you are going to get to drive another new track at Silverstone, your third in the ILMC Series. How challenging is it to go in and have to learn a track with limited track time in order to be able to compete in a 6-hour race?

“It has been challenging to learn some new tracks this year but that why we race. It’s a challenging sport. But it’s also fun to go race at some circuits that I’ve heard and read about but never been, like the classic tracks we’ve raced this year – Spa, Imola, Silverstone. It’s a big reason why I’m enjoying racing in the ILMC Series this year.”

What are you doing to in advance to learn the circuit and stay in race form?

“We did a test day back in the States at Road Atlanta last month with the Ferrari to get a couple of days in the car. That was beneficial. Also, we will do a track day early in the week on the Silverstone circuit to familiarize ourselves with the track. Both Nic and Michele have raced at Silverstone in years past. It will be a first time for me so, will need some time to learn the track and get up to speed.”

Has it been even more challenging to be an American driver competing on new European circuits against experienced European drivers who compete on these tracks regularly?

“We have two races in the U.S. – Sebring, which we won, and the Petit Le Mans race coming up in a month, that we also hope to dominate. Of the four European tracks, we only have experience at Le Mans, which didn’t help us this year with the motor problem we had. The three other circuits were new to us and probably regular circuits for most of the other drivers. Our learning curve was certainly greater with the short practice time we get.”

Have you ever driven at Silverstone…and if so what and when?

“Silverstone is obviously one of the most historical race tracks in the world and I’ve raced there quite a bit growing up back in the early 1990’s. I think the track has changed a little since then. The last time I raced at Silverstone was back in 2000 with ALMS in a factory BMW M3, and the whole facility is just phenomenal. There are new garages and a few additions to what I have seen, and I know the track pretty well so I’m really looking forward to getting back there because it’s one of the greatest racing tracks in the world.”

Has it been challenging to be competing on European circuits you haven’t raced at for years against experienced European drivers who compete on these tracks regularly?

“The format that ILMC offers does not allow for a whole lot of practice, and you have three drivers that have to circulate through the car in practice, so if you don’t have some knowledge of the track beforehand, it is a challenge to get up to speed right away. The Krohn team always puts together a competitive car, and it is very important to learn a new track and go fast. Silverstone will be very interesting, but I like taking on challenges. That’s kind of what this sport is about, so hopefully we will have luck on our side this time and have a good race.”

How important will points be at Silverstone with just 3 races to go?

“I think every single point from now on is crucial, and we have to get full points at every race in order to win the championship. We have to qualify on pole and win races to still be in contention, because we’re still behind the Corvette in second place. I think we’re very solid and have been running consistent races, even though they haven’t been our best results. Every point that we can potentially score is going to be very vital for this championship.”

Have you ever driven at Silverstone…and if so what and when?

“I drove in Silverstone on the old circuit. It was my first race in the FIA GT2 and we finished third”

Being a European driver, is it odd for you to be racing in an international series with an American team, mostly against fellow Europeans?

“Actually I’ve driven other times in international series competing against European drivers. It is pretty normal and when you start driving at high levels you always meet the same guys in the racetrack. This year for me it is a little different because I have the support of an American team, but I think the approach to the races is exactly the same no matter the team.”

We’ve had a bit of a break between ILMC races…how have been staying in race form?

“The stop between Imola race and Silverstone is very long but in the meantime I have driven in UK in the GT Open and in Austria for another race. So, for me is not a big issue. I also took some days off just to relax my mind and now I am ready to be in the car and racing again.”

Silverstone is another new circuit for Krohn Racing this season. How do you go about setting up the race car in advance when you haven’t raced or tested there before?

“We look at the characteristics of the track in terms of straight line and corner speeds, length of the corners and historical data, along with input from Michelotto and Dunlop on the track surface itself. This allows us to make comparisons with what we have done at other tracks. Then we put a car on the track which represents where we think we should be in terms of setup and we make a test program based on a prioritized list of questions we want to answer about the car, tires and track conditions.”

How are your drivers preparing for this race?

“We have some driving school time booked prior to the race meeting so the drivers can get a look at the track from the seat of a car on track. There is, of course, no substitute for driving the race car itself and part of our practice program will be allowing the drivers time to get used to the track.”

With only three races to go and sitting 2nd in points, how focused will you be at Silverstone on points accumulation?

“We are focused on winning races and the championship, and from our position we need to win races. There are still 45 points available for us to win.”

Nissan set for 6 Hours of Silverstone