Kamui Kobayashi is leading Sebastien Buemi at the halfway stage of the 2019 Le Mans 24 Hours, while an AF Corse Ferrari is preventing Porsche domination in the GTE Pro class and the privateer Ford leads GTE Am. 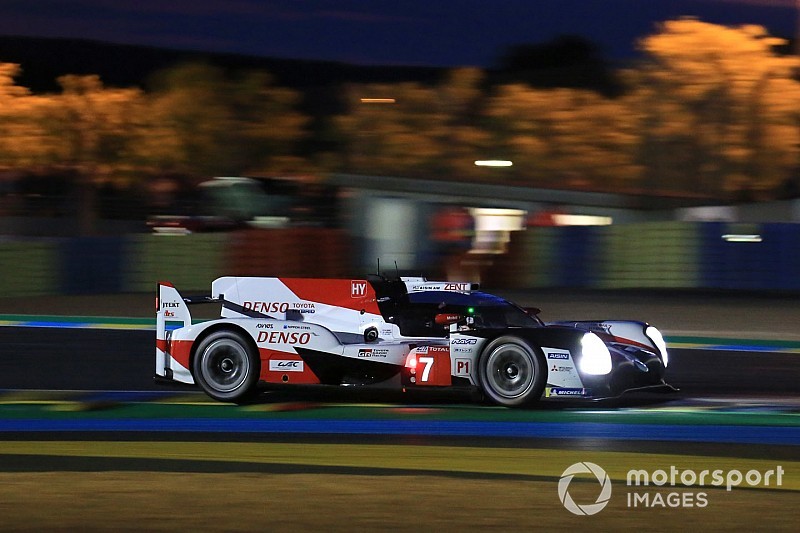 The Toyota TS050 Hybrids stayed in the order #7 ahead of #8 following their 13th stops, Mike Conway seven seconds ahead of Sebastien Buemi.

Behind them the SMP Racing BR Engineering BR1s ran two laps down in third and fourth, 21sec apart, with Gustavo Menezes another 90sec down in the #3 Rebellion Racing R13. Its sister car piloted by Bruno Senna was four laps down.

The yellow caused by an Aston Martin from GTE Pro left Conway 70sec clear of Buemi.

Approaching 10h25m into the race, Egor Orudzhev dropped the third-placed #17 SMP BR1 at the Porsche Curves, with a major accident that ended his race.

With the #8 Toyota having already stopped and the #7 having not done so, Conway used this safety car period to stop but inevitably rejoined behind Buemi. However, the #7 remained there in the mirrors of its sister car which appeared for a while to be sending out worrying smoke signals.

Following the next round of stops, Kamui Kobayashi got the #7 TS050 out just ahead of Buemi and started edging away until the Safety Car was deployed to retrieve the LMP2 ARC Bratislava Ligier at the Porsche Curves.

Into the eighth hour, the Signatech Alpine of Nicolas Lapierre started cutting into Job van Uitert in the #26 G-Drive Oreca but the latter dealt well with traffic and extended the lead to over 10sec.

Following a split caused by the safety cars, Lapierre’s replacement Pierre Thiriet was left 80sec adrift of the leading G-Drive machine but 70sec ahead of Gabriel Aubry in the Jackie Chan DC Racing Oreca which was pursued by the similar car of DragonSpeed steered by Roberto Gonzalez.

However, following the Rebellion-caused safety car, both Jackie Chan DC cars – driven by Aubry and David Heinemeier Hansson were ahead of the DragonSpeed machine, now piloted by ex-F1 winner Pastor Maldonado.

As the race hit the halfway stage, Roman Rusinov in the #26 G-Drive car was almost four minutes clear of the Signatech Alpine with Andre Negrao at the wheel.

Ho-Pin Tung was third for Jackie Chan, ahead of Maldonado with Matthieu Vaxiviere of TDS Racing into fifth ahead of Ricky Taylor in the second Jackie Chan machine.

At 45mins past the eighth hour, there was a clash at the second chicane between Olivier Pla in the #66 Ford GT and Sven Muller in the #94 Brumos-liveried Porsche 911 RSR as they dueled over 10th place.

Approaching the ninth hour – midnight local time – James Calado moved the AF Corse Ferrari 488 into the lead ahead of Michael Christensen before pulling into the pits for the 10th time.

Once the leaders had cycled through their 10th stop, Christensen resumed around 6sec ahead of Calado with Corvette Racing’s sole remaining #63 C7.R chased by Jonathan Bomarito (#67 Ford), Patrick Pilet (#93 Porsche), Sam Bird (#71 Ferrari), Richard Lietz’s #91 Porsche and the #69 Ford GT of Richard Westbrook.

Alex Lynn had spun the 13th place #97 Aston Martin Vantage AMR just past midnight, breaking the rear wing and right-front fender, and the team were still occupied fixing that 20mins later when Marco Sorensen suffered a much bigger impact in the #95 Aston just before Indianapolis corner.

The resultant safety car period had a major impact on the race, too, with Christensen and Calado very close too each other – indeed, the Ferrari was swiftly past the Porsche – but now over 75sec clear of their chasers led by Magnussen, Pilet, Bomarito, Wesbtrook, Lietz and Joey Hand in the #68 Ford.

The 11th stops saw the #92 Porsche now driven by Laurens Vanthoor emerge just ahead of the AF Ferrari now driven by Daniel Serra and the 12th stops maintained this order, but Vanthoor went over half a minute clear of the Ferrari only until the spinning Ligier brought them back together.

Sadly that didn’t bring the chasing pack back in touch, with third and fourth places held by Fred Makowiecki and Earl Bamber in the the #91 and #93 Porsches, followed by Mike Rockenfeller in the Corvette, and then the #69, #68 and #67 Fords of Scott Dixon, Sebastien Bourdais and Andy Priaulx respectively.

A spin in the ninth hour for Wei Lu in the JMW Motorsport Ferrari 488 while running second helped ensure Jeroen Bleekemolen in the Keating Motorsports Ford GT shot up to almost 2mins.

A chastened Lu continued to lose time and by the time the class leaders made their ninth stop, the Ferrari had been jumped by the #77 Porsche 911 RSR of Julien Andlauer which ran 1min47 behind Bleekemolen.

Behind Lu ran Patrick Lindsey in the Team Project 1 Porsche ahead of Euan Hankey in the Aston Martin Vantage run by TF Sport, albeit a lap down.

Following the safety car period caused by Aston Martin carnage, Bleekemolen stretched his lead over Andlauer to over 2mins and Lindsey’s Porsche had replaced Lu’s Ferrari in the top three.

The 10th pitstops saw Felipe Fraga keeping the Keating Motorsports Ford 83sec clear of Andlauer, with Lindsey only 3sec ahead of the JMW Ferrari now driven by Rodrigo Baptista, and the similar 488 of WeatherTech Racing driven by Cooper MacNeil.

After 11 stops and the safety car for the spun Ligier, Fraga led Christian Ried in the #77 Dempsey-Proton Porsche, but one of the stars of the race’s previous quarter was the TF Sport team, for whom Charlie Eastwood had driven the Aston Martin Vantage ahead of the two Ferraris of Baptista and MacNeil, and Jorg Bergmeister who’d taken over from Lindsey in the Project 1 Porsche.