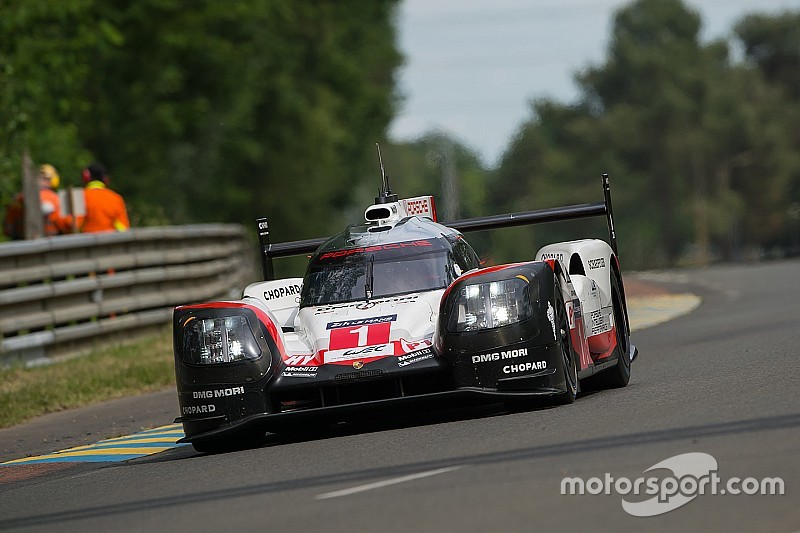 Just under a year on from its heartbreaking 2016 defeat, Toyota dominated the test, locking out the top three positions with its trio of TS050 Hybrids and relegating Porsche to fourth and fifth places.

Kamui Kobayashi set the best time of the day, a 3m18.132s, in the afternoon session aboard the #7 Toyota, going a full 1.6 seconds quicker than the pole time of Porsche driver Neel Jani from last year.

The sister #8 Toyota’s best time was a 3m19.290s set by Sebastien Buemi, a little over two seconds faster than Jose Maria Lopez’s best effort in the #9 car, while Earl Bamber set the pace for Porsche on a 3m21.512s.

While Seidl said Porsche chose not to attempt a full-blown qualifying simulation, he admitted the time set by Kobayashi and Toyota was “impressive”.

“We’ve had a mixed test day,” said Seidl. “We were focussing on race set-up and refrained from simulating qualifying.

“Although we didn’t achieve the mileage we wanted, we still learnt important lessons for the race regarding tyre choice and tyre wear.

“Toyota’s speed was impressive, we could not match that. In the coming days we will analyse today’s data and draw our conclusions to improve our cars’ performance.”

Kobayashi’s time put him within 1.3 seconds of Jani’s lap record of the Circuit de la Sarthe on Sunday, the Swiss driver’s pole-winning time of 2015 being a 3m16.887s.

But the Japanese driver declared his laptime to be “not brilliant” and reckoned he could have gone at least half a second quicker without traffic and with the full benefit of track evolution.

“The laptime was not really brilliant,” said Kobayashi. “Actually I had a lot of traffic, so we were missing half a second of laptime, which I think is very positive for us.

“It’s a really exciting feeling when the lap wasn’t really the best, but we still achieved a good laptime.

“It was only at the start of the session, I think the third or fifth lap, so the track evolution would have helped more and we’ll see more laptime coming in the next two weeks.”