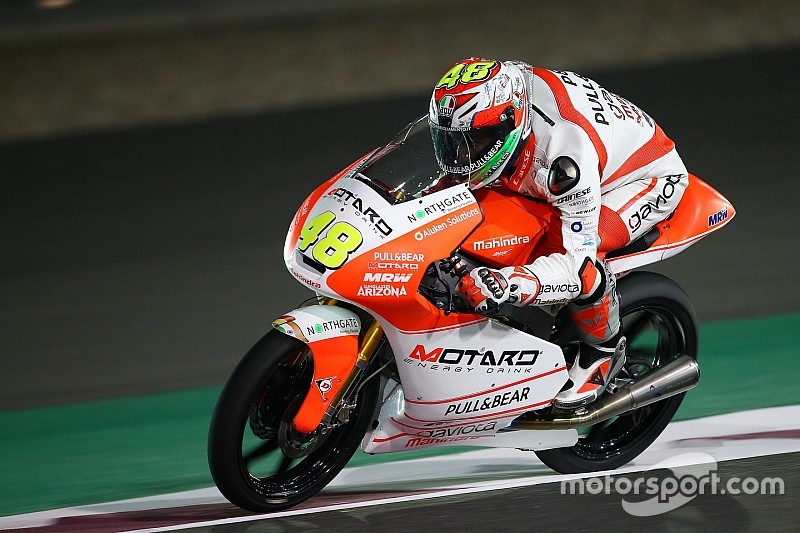 Mahindra endured a difficult start to its 2017 Moto3 campaign, returning empty handed from Qatar in the 18-lap race.

With rain playing a spoilsport on Saturday, the grid for the first race of the new season was decided as per the combined fastest times from the three practice sessions.

As a result, CIP's Marco Bezzecchi was the highest ranked rider for the Indian manufacturer in 21st, ahead of sister Peugeot's Jakub Kornfeil and followed by the lead factory Aspar rider Albert Arenas.

It showed in the race as Kornfeil ended up as the lead Mahindra in 20th, while Pagliani was 22nd ahead of dalla Porta. Though Bezzecchi was classified 25th, but the Italian's progress was hampered when he suffered a late fall from 12th on the road.

"It was great to be fighting with [Nicolo] Bulega and [Enea] Bastianini. I was able to stay with them through all the corners but they had just a little bit more [pace] down the straight," said Bezzecchi.

"If I am with the group, I can stay and fight with them – no matter who. A shame to crash, I was first in the group and I went for the inside.

"At this track the kerb is a little bit down, I touched it and went off. It’s a disappointment to fall, but I know I can now fight with these guys. I just need to qualify better."

Aside the finishers, Finn Pulkkinen retired after crashing on Lap 14, while Arenas had a fall as early on Lap 4: It was a slip on the inside of the corner, which was dirty," Arenas said.

"The tyre slid and I wasn't able to avoid falling. We had caught the group fighting for the points and we were setting a pace almost a second faster than on Friday.

"The bike was going very well and we had found a perfect setup, but we lost any chance of a good result with the crash.

"I feel bad that we couldn't finish because we had a good bike, but we were also starting from far back on the grid because of the absence of a qualifying session -which made everything difficult."

The Spaniard's thoughts were echoed by Mahindra's team boss, Mufaddal Choonia: "We know where we need to work, and we need to work fast. At least the bike has shown that it is strong, as Marco proved.

"He was in a group with a similar pace to the leaders, but they got split due to bad grid positions. The bike is promising – a clear step forward from last year. I hope that we can now help the riders to make the most of it."

Meanwhile, at the front, Leopard's Joan Mir took victory with former Mahindra duo of John McPhee and Jorge Martin finishing second and third respectively, as the field now heads to Argentina in two weeks time for Round 2 of the 2017 season.