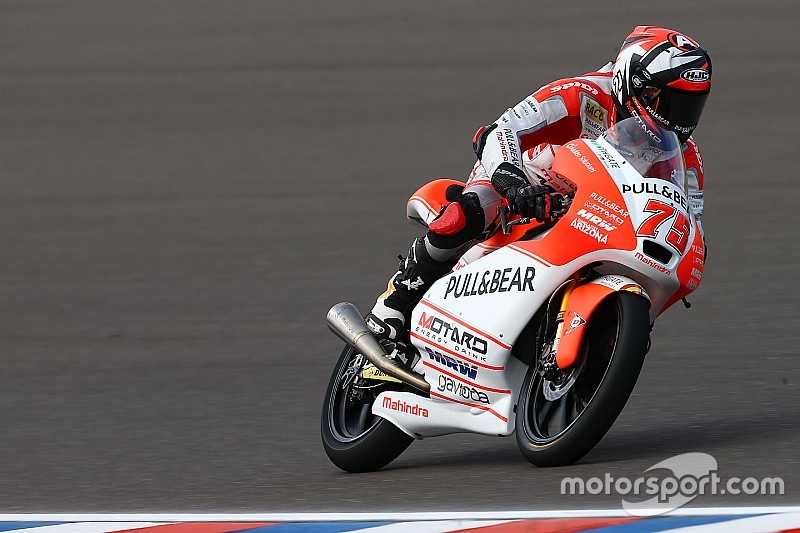 Aspar Mahindra riders Albert Arenas and Lorenzo Dalla Porta are optimistic about Sunday’s Moto3 race in Argentina, despite having their work cut out after a difficult qualifying.

Saturday’s grid-deciding session took place in mixed weather conditions, with a light shower preventing riders from making major improvements towards the latter stages of the session.

The conditions caught out Arenas, who crashed on his first flying lap in qualifying, necessitating a visit to the medical centre.

However, after some mandatory checks the Spaniard was back on track for the final few minutes of the session, lapping Autódromo Termas de Río Hondo in 1m50.093s to claim the 19th spot on the grid.

The 20-year-old feels Mahindra has made a step forward and is looking forward for a better result in Sunday’s 21-lapper.

“I had a big crash on my first lap,” he said. “I was on the right line, in a group, but lost grip and crashed. I didn't think I would make it back out because I was in pain everywhere and the bike was quite badly damaged.”

“They checked me over, my left hand was particularly painful, but as soon as they ruled out any injuries I just tried to forget it, pushed hard and tried to make the most of all the hard work we had put in during practice.

“As soon as I went out it started to rain, I could see some riders stopping and even though my visor was a little steamed up I knew I had to chance it.

“I think we could have done a little better today but in the end we have taken a step forward and now I just need to rest and recover for tomorrow.”

Dalla Porta, meanwhile, will start 26th on the grid after admitting that he failed to make the most of qualifying.

“The bike improved quite a lot thanks to the new engine,” he said. “We made a good start but I was struggling to get a slipstream.”

“In the end it started to rain and just when I had the chance to pick up a tow and set a good lap time everybody started to slow down.

“I tried to go alone but it is tough. It is a shame but I am calm because this engine is stronger and it gives us a better chance of a comeback tomorrow.”