Martin on high with Moto3 results in second half of 2016 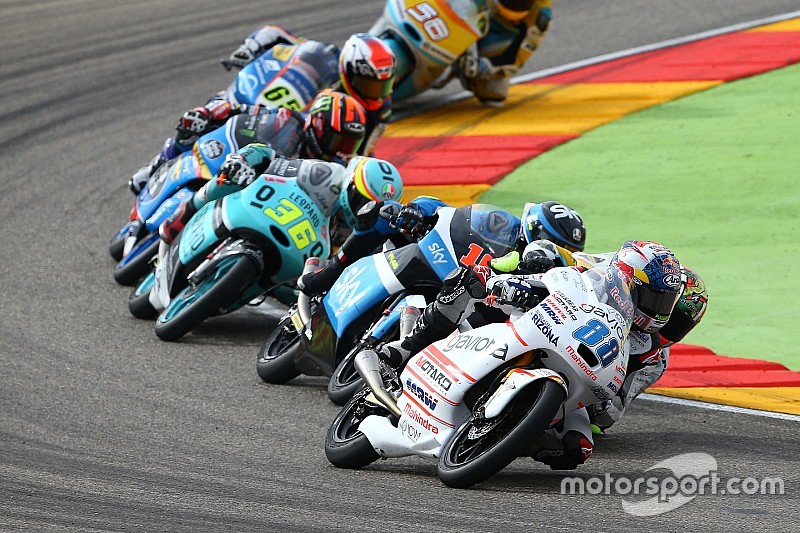 Aspar Mahindra's Jorge Martin says he is pleased with how his second half of the Moto3 season has panned out, after another top six finish in Aragon.

The Spanish rider made up five places to end a fine sixth, battling with the lead group finishing 1.903s behind winner Jorge Navarro.

"We are doing a great job in this second half of the season and today's [Sunday] race went better than we expected," he said.

"I started really well, a perfect start but I had problems with other riders. This allowed the front group to break away but I was able to then catch them and fight really hard.

"It was just a shame that I made a small mistake in the 'corkscrew' and lost almost a second because I lost contact with the front positions.

"I am happy with my pace in the race and with the final position and now I am looking forward for the 'flyaways' to start," the Spanish rider added.

Ever since the German round, Martin has scored 46 points to 10 in the nine rounds prior to it and has moved to 14th place in the standings.

Aspar teammate Francesco Bagnaia for second race running missed on points, dropping to seventh in the championship, losing some ground in the fight for second.

The Italian was running as high as 12th having started from 19th, but rivals tactics cost him time as he missed on scoring a point by mere 0.155s.

"It could have been a lot better if it wasn't for other riders who wanted to battle at the wrong moment.

"I had the pace to be in the second group, close to Martin, and I could have stuck there all race but [Hiroki] Ono decided he wanted to play and he broke our rhythm, it cost us a lot of time.

"Our bike was also slow on the straights today, so it was impossible," the VR46 rider rued.

Peugeot's John McPhee was the best of the rest among the Indian manufacturer to end 13th fending off Niccolo Antonelli by 0.016s over the line.

Among the non-finishers, CIP's Fabio Spirenalli crashed out on Lap 1 when he collided with Team Italia's Stefano Valtulini, the latter retiring after running for further nine laps.