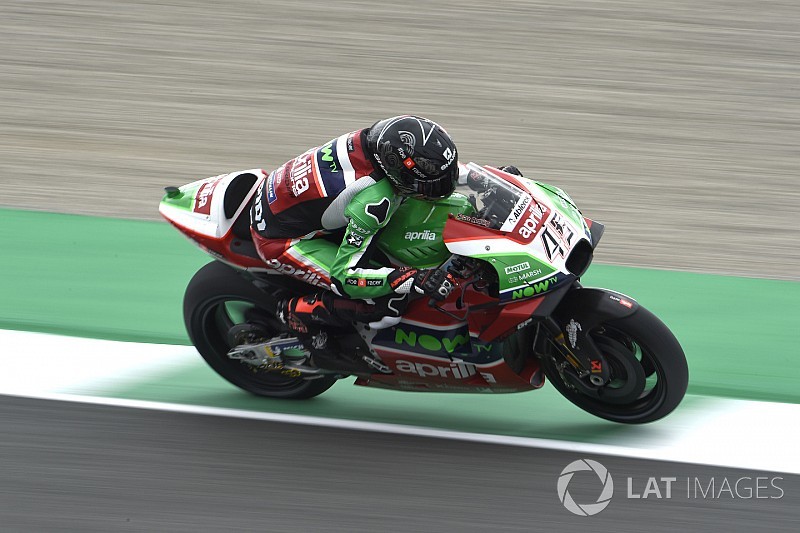 Aprilia MotoGP rider Scott Redding says he is weighing up an offer to remain with the outfit in a test rider role next year.

Redding, who joined Aprilia on a one-year deal in 2018, will lose his ride to Andrea Iannone next year and has no obvious opportunities to continue as a MotoGP full-timer.

However, it has been reported that Redding was offered to stay on as an Aprilia MotoGP test rider – and when asked about it by Motorsport.com in Assen, the Briton confirmed this was a possible avenue.

"But if my career comes to that I have to accept it, work with Aprilia to make the best package for them.

"Maybe to be test rider with some wildcards, then OK."

Asked by Motorsport.com whether this could be a potential route to a full-time MotoGP return in the future, Redding said: "How many test riders have come back racing, even with good results?

"Like [Ducati tester Michele] Pirro, [KTM tester Mika] Kallio, those guys have experience and have got good results. They won't come back.

"That's my only scare. Maybe I'm test rider for 10 years, and I can set myself up for life. Or maybe I can race something and be test rider.

After finding out he would lose his RS-GP ride, Redding spoke of Moto2 and World Superbikes as potential destinations for 2019.

At Assen, he said a top-line WSBK ride would be preferable to a MotoGP test role – but admitted this did not look to be on the cards.

"All the good stuff, that can fight for championships, is more or less done deal. Do I want to go to WSBK with a satellite team? Maybe it will be good.

"But I've done 'maybe' most of my life, and most of the time it's 'maybe not'. I need to think about budget, in future I want to have a family that I have to support.

Team manager Romano Albesiano said in Assen that Aprilia, which currently has Italian Superbike rider Matteo Baiocco as its MotoGP tester, was planning a "more performance, high-level test team" for 2019.

Redding's current teammate Aleix Espargaro, signed with Aprilia through 2020, said having the Briton on board as test rider would be "unbelievably good".

"In the last months I have been pushing Romano a lot to have a strong third rider, because with the calendar we cannot do many tests, because we are not machines," Espargaro said.

"As we saw with [Pirro at] Ducati and also [Sylvain] Guintoli at Suzuki, who is doing a great job, also Stefan Bradl went to Honda… all the manufacturers have really fast test riders, and we don't have anyone.

"If Scott stays with us as a test rider, it's a really good move for Aprilia and he will help us a lot."