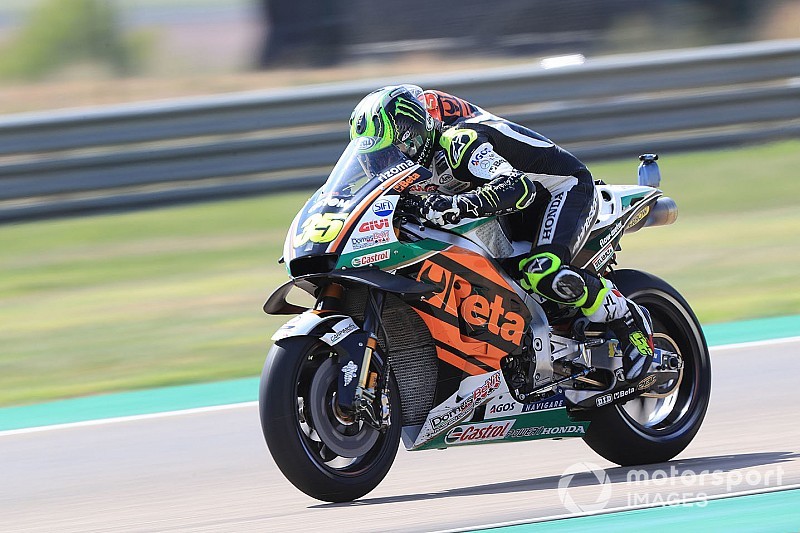 Crutchlow set the quickest time in the dying moments of the 45-minute session, the LCR Honda rider recovering from an earlier crash at Turn 2, but his 1m47.393s effort came up 0.011s shy of Marc Marquez's benchmark from FP2.

Barring an early improvement from Suzuki man Alex Rins, the combined top 10 order did not change in the opening half of the session until Crutchlow went fastest on a 1m48.041s with 20 minutes remaining.

That remained the benchmark until Pramac Ducati's Danilo Petrucci bettered that by two tenths, but after a brief spell at the top for Marquez, Crutchlow retook first place with less than a minute left on the clock.

Jack Miller (Pramac) slotted into second, just 0.020s behind, while Andrea Dovizioso (Ducati) and Andrea Iannone (Suzuki) bumped Marquez down to fifth in the FP3 order.

But Marquez's Friday effort ensures he topped the combined timesheets ahead of Crutchlow and Miller, while Jorge Lorenzo (Ducati) ended up fourth overall despite not improving on his Friday time ahead of Dovizioso and Iannone.

Next up in seventh was Dani Pedrosa (Honda), ahead of Petrucci, Alvaro Bautista's Nieto Ducati and Rins, who hung on for the final automatic Q2 spot.

Missing out on a top 10 place by just 0.036s was the Yamaha of Maverick Vinales, but his teammate Valentino Rossi ended up way down in 18th, 1.5s off the pace, after crashing on his final run at Turn 2.

Bradley Smith was an encouraging 12th for KTM ahead of Franco Morbidelli's Marc VDS Honda, while Aleix Espargaro rounded out the top 15 behind the Tech 3 Yamaha of Johann Zarco.

Pol Espargaro had to be taken to the medical centre after a crash at Turn 14, with the KTM rider fracturing the left collarbone he had only just recovered from breaking last month in Brno.

The only other rider to crash was Avintia Ducati stand-in Jordi Torres, who was once again 24th and last.

Espargaro out of Aragon GP with another collarbone fracture