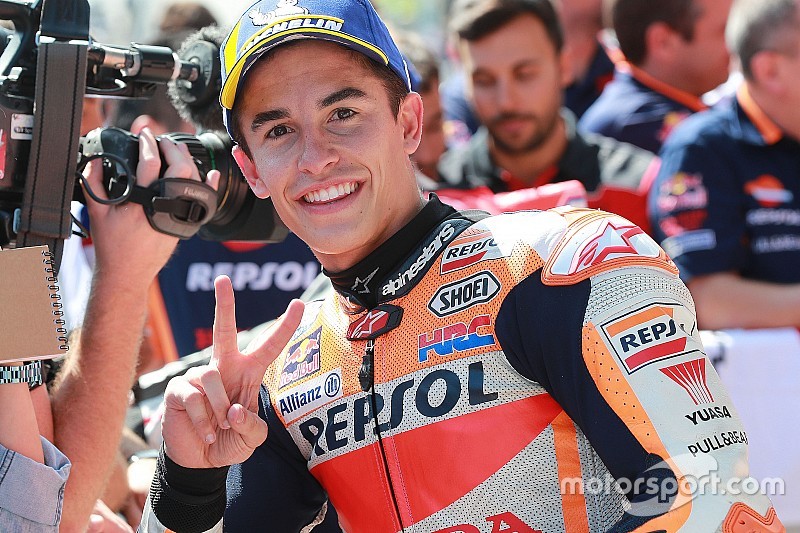 At a track where top speed and acceleration, Ducati's strongest suits, are crucial, the Italian manufacturer entered the 15-minute Q2 shootout as favourite.

However it was Honda rider Marquez that led the way for most of the way, with Dovizioso narrowly missing out at the end of both runs.

He was only 0.03s behind Marquez during the mid-session break but it was Dovizioso's teammate Jorge Lorenzo who moved into the lead temporarily.

But Marquez fought back, setting a time 0.02s faster than Lorenzo before going one-and-a-half tenths clear.

While he couldn't improve on the 1m23.241s he set with three minutes to go, he still ended up ahead as Dovizioso's late effort fell two thousandths of a second short.

Lorenzo will line up third on the grid, 0.135s off the pace, while the third Ducati GP18 of Danilo Petrucci took fourth.

Johann Zarco was the top Yamaha on his two-year-old Tech 3 machine in sixth, followed by Avintia Ducati's Tito Rabat.

Maverick Vinales had a subdued pre-qualifying FP4 and also wasn't a factor in qualifying as he only took 11th, more than a second adrift, only beating Alvaro Bautista's year-old Nieto Ducati.

Bautista and Rins were first and second in the first part of qualifying, while Valentino Rossi could only manage fourth.

The Yamaha rider, struggling with his bike's acceleration woes, was fifth during the mid-session pitstops and could only temporarily improve to second before he dropped behind again, his last flyer not good enough to move into the top two.

Rossi's 14th grid position is his worst since the 2016 Australian Grand Prix, when he was 15th.

Bautista led Bradley Smith at halfway point, and the Spaniard improved twice late on to end up first with a 1m24.195s.

KTM's sole rider Smith however had to settle for 13th on the grid as he was edged out by Rins by 0.015s, the Briton missing out on a final lap by pitting before the chequered flag fell.

Behind Rossi, Aleix Espargaro will line up 15th on the grid on the lead Aprilia with Franco Morbidelli ending Q1 sixth but only starting the race 19th due to a three-place grid penalty for impeding Espargaro in practice.

Jack Miller's first run was ruined by a gearbox problem and will only start 16th, ahead of Tech 3 Yamaha's Hafizh Syahrin and Avintia Ducati's Xavier Simeon.

Austria MotoGP qualifying - as it happened