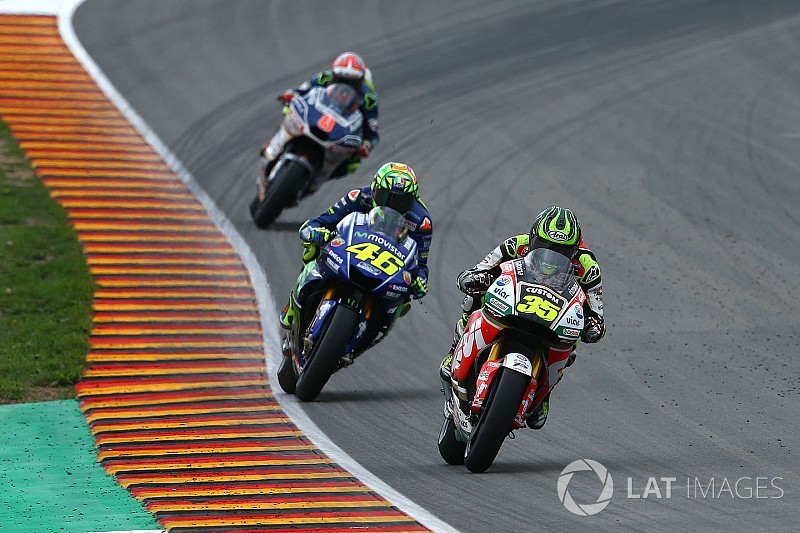 LCR Honda rider Cal Crutchlow says his run to 10th place at the Sachsenring was his most disappointing result of the MotoGP season so far.

Crutchlow, who had scored podiums in the German Grand Prix in 2013 and 2016, lined up fourth on the grid, but slipped down the order at the start and could not fight his way back to the front.

He eventually finished 24 seconds behind the fellow Honda of race winner Marc Marquez.

“Probably the most disappointing race of the year for me,” he told BT Sport after the race. “I’ve crashed out of races and been happier. Glad it’s over and I can go to the summer break.”

The Brit, who selected medium front and medium rear as his tyre compounds for the race, said his hopes of a strong result were undone by an unexpected spike in front-tyre pressure while running in traffic.

“In practice we never went anywhere near that high,” he told the media later. “The difference was, we were behind other riders and the heat on the front tyre just made the pressure go up and it's impossible to ride our bike at that pressure.

“So it's the most disappointing race of the year for me so far, when I've been riding well all weekend and in the race I could've easily rode very well as well but I just never had the front tyre.”

Crutchlow regretted his decision not to use the hard front tyre, as he said he should've gone with his “gut feeling” instead of switching to the medium due to the risk of rain.

He recalled: “The problem is, when I overheated [the front] at the start of the race, it's already finished. I had to drop back, I dropped back... three or four seconds to ride alone, then I started to go the same pace as the leader again.

“And at the end of the race the thing was just done. So I slowed down, then [Tech 3 Yamaha rider Johann] Zarco was catching me, I made a mistake - I couldn't brake, was my problem, I had no brake pressure at all because I was just folding the front tyre.

Crutchlow said the front tyre temperature problem was a recurring one for Honda, but insisted himself and the team could've “never anticipated” that it would be this bad in this race.

Redding declares Sachsenring the "worst race of my career"