Rossi warns '19 Yamaha "not the improvement we need" 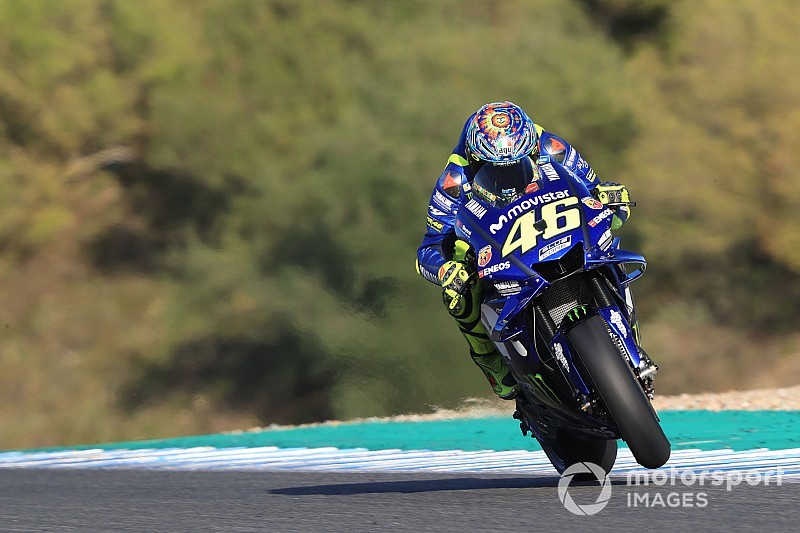 Valentino Rossi says the developments Yamaha brought for the Valencia and Jerez MotoGP post-season tests are not good enough to fight for victories.

Rossi was only 17th on the first day of the Jerez post-season test and while that was because he suffered a mechanical failure while on new tyres, the Italian said his race pace was also not strong.

Yamaha brought two new engines for the two tests in Valencia and Jerez, but Rossi reckoned neither of them is "the improvement that we need".

"The problem is that for me we don't make a big step," said Rossi. "When I ride the bike, more or less the problems are the same.

"In the overall classification I am very much on the back because I have a problem when I had a new tyre so at the end I don't make the time attack but apart from that, if you concentrate on the pace, that is the most important, for me we are not very fast.

"The top guys going faster compared to us. The problem is not making the right choice [of the two engines], the problem is that anyway one or the other is not the improvement that we need. This is my idea."

Rossi added that the bike's issues including tyre degradation haven't been fixed and that Yamaha is slower than Ducati and Suzuki on used tyres.

"[With] the new tyre we are fast, Maverick is very fast, also Franco [Morbidelli] is fast. After some laps, all the Ducatis and also Suzuki have a better pace.

"If we race tomorrow we are fifth, sixth, seventh, maybe fourth if one crash in front, but we don't fight for the victory."

Rossi feels Yamaha's situation is similar to what it was this time last year when the team was also struggling to make the bike competitive, but said it is too early to predict 2019 to be a repeat of 2018.

Yamaha endured its longest winless streak during the 2018 season, with Maverick Vinales finally ending the victory drought at Phillip Island, scoring the team's only win of the season.

"Is very early to say," Rossi said. "We don't have, like you said, just the engine.

"We have also some other areas that are so important that you can work any modify also during the season so we hope that we can improve."