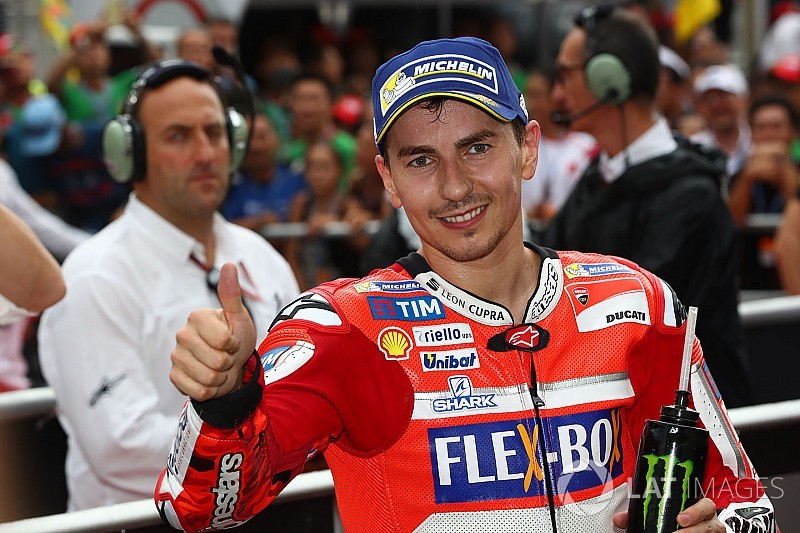 Dovizioso led home a Ducati 1-2 at Sepang, keeping his faint title hopes alive heading into the Valencia finale as points leader Marc Marquez could manage no better than fourth.

Lorenzo enjoyed a spell out front after passing early leader Johann Zarco on the ninth lap, but soon received a dashboard message - 'Suggested Mapping 8' - that the team later admitted was a coded instruction to let Dovizioso through.

However, the lead didn't change hands until the end of the 16th lap, when Lorenzo suffered a moment and ran wide at the final corner, allowing his teammate through.

Asked about the dashboard message, Lorenzo claimed he hadn't seen it, and that he only realised he had been ordered to let Dovizioso go once he was reuinted with this crew in parc ferme.

But he added that he was aware of the delicate points situation and didn't need specifically telling to allow Dovizioso to take the win.

"Honestly, I didn’t see anything," said Lorenzo. "I was very focussed on the next corner, because in the rain you cannot lose concentration. I lost concentration in Misano and you know what happened [Lorenzo crashed out of the lead].

"You know I would say that I saw if it was true. But I didn’t see, just in the parc ferme they told me they put me this message.

"I already knew, I didn’t need anyone to tell me what to do in this situation. I knew the world title was important in case Marquez crashed, I knew he was in fourth or fifth position."

Second place marks Lorenzo's best result for Ducati to date, following on from third-place finishes in Jerez and Aragon.

The Spaniard admitted that he was unable to keep up with Dovizioso after losing the lead, although he knew he had to be careful not to make what could have been a catastrophic error.

"Obviously I wanted to win the race, to keep pushing until the end," said Lorenzo. "But the front was at the limit and to stay with Dovi until the end I needed to be too much on the limit on the braking.

"When I was close to him on braking I was trying not to make something crazy because I could have closed [the front] and crashed together with him. I needed to be calm.

"He was riding very well and he open a little bit the gap. I tried to stay with him and push but it was difficult to stay very close.

"It started raining on the last lap, he slowed down a bit and I see him very close, but to try something maybe I had 90 percent possibility to crash."

Dovizioso "so angry" about Phillip Island after Sepang win