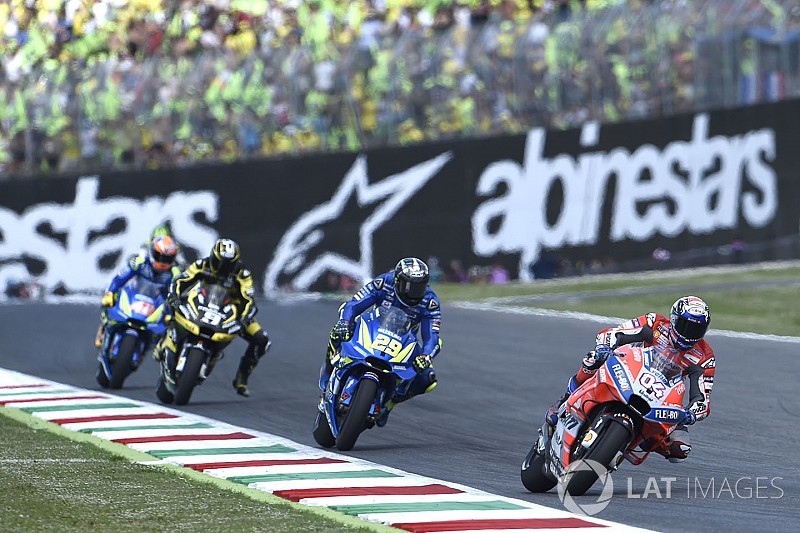 Andrea Dovizioso has described MotoGP points leader Marc Marquez’s crash in the Italian Grand Prix as being “like gold” for his own title ambitions.

Successive non-finishes at Jerez and Le Mans had left Ducati rider Dovizioso trailing Marquez by a full 49 points prior to Sunday’s Mugello race.

However, Marquez finished outside of the points in 16th after crashing on the fifth lap at the Scarperia right-hander before remounting his works Honda.

It means Dovizioso, who finished second behind Ducati teammate Jorge Lorenzo on the Italian marque’s home turf, is now within 29 points of his 2017 title rival.

“Things have opened up a bit again and I believe that now the situation is better even though there’s still a big gap,” said Dovizioso of his title prospects.

“If you look at it from this point of view, [29 points] is a big gap, but, considering that there are a lot of races still to go, today’s result is like gold.

“The important thing is to be fast and to be pissed off about a second place finish.

“After a Friday like that, to succeed in coming second and gaining 20 points on Marquez is like gold. We need to look at it from this point of view.

“It was clear the Honda could not stay with us during the race, but I didn’t expect it [Marquez crashing] because normally is he is better at managing the situation.”

Lorenzo’s Mugello win was his first for the Bologna factory since he became Dovizioso’s teammate at the start of the 2017 season, with six seconds separating the pair at the finish at Mugello.

While Dovizioso said he was hindered by a bad choice of front tyre, opting for the asymmetric hard instead of the more conventional medium, he said he knew based on the practice form that Lorenzo would be strong in the race.

“I expected Jorge to be stronger today than in the past,” said Dovizioso. “I saw in the practice he had the chance to drop less in the race.

“The race was particular, the grip was very low, the pace was slower. You have to adapt to the conditions, and I had a worse feeling than in practice.

“I think he managed the race in a really good way, because both tyres he used were really soft, so to keep that pace until the end was very difficult.”

Valentino Rossi, who finished third behind the two Ducati riders, likewise said he knew former teammate Lorenzo would be tough to beat on Sunday.

“Some other weekends he was strong in the practice, but [on Saturday] I saw the timesheets, and I said, ‘this time [it will be] difficult’,” the Yamaha rider said.

“He had good pace and he could be fast with a softer front, so I expected he could do a good race.”