Rizla Suzuki and Bautista part for 2012 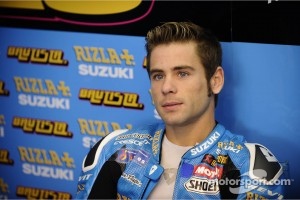 Bautista joined Suzuki for the start of the 2010 season, making his racing debut at Qatar. He has been a popular rider with the team as well as establishing himself as a firm favourite with the fans due to his racing spirit and infectious smile. During his two seasons with Suzuki he has recorded top five finishes and put his Rizla Suzuki GSV-R on the front row of the grid. Bautista has been the solo rider in the team in 2011 and has been an asset in the improvements to the bike and the huge potential it is now showing.

Suzuki Motor Corporation, all members of the MotoGP team, title sponsor Rizla and the team’s other sponsors and partners would like to wish Bautista well in his future career and every success and happiness in his personal life, and everyone in the Rizla Suzuki squad would like to thank him for the two years of hard work, loyalty and commitment that he has given the team.

“I am very sad to be leaving Suzuki after the two great years that I have had here. It has been a great team to work in and I have learnt a lot of things from everyone in the team. It was a fantastic experience working with an English/Japanese team and we have become like a big family, except we have never had any arguments and no-one falls out with each other! I want to thank everybody personally for the last two years, sometimes it has been difficult, but nobody ever gave up and I felt like I always had their full support and commitment. I don’t feel like I am leaving a team, but a group of friends that I hope I will know for a long time. I want to say a special thank-you to Tom, Paul, Ken san and Sahara san, and wish them and the rest of the team all the best for the future.”

Pedrosa tops the charts over two-day 1000cc test in Valencia

Bautista not anxious to seal WSBK title early in Mandalika

Bautista: Rea had chance to end losing streak in Argentina