Round 9 of the 2011 MotoGP World Championship gets underway on Friday, with the pre-event press conference for the eni Motorrad Grand Prix Deutschland held at the Sachsenring circuit on Thursday afternoon.

Speaking first was current Championship leader Casey Stoner, who in 2003 took his debut GP podium here in the 125cc class. The Australian discussed the importance of establishing a solid set-up with his Repsol Honda to deal with the technically demanding layout, as he bids to defend his 19-point lead at the top of the standings. 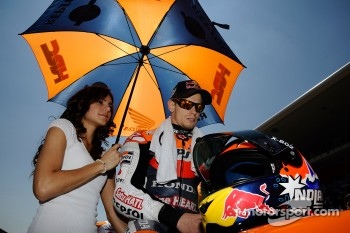 “Sachsenring’s very tight and technical, and in the first half of the track you have to get your lines right and make sure the bike’s set up well to turn in the corners with the throttle open,” said Stoner, who took a podium in the German GP last year. “The last part of the track is fast and flowing so it’s a difficult one. It’s a challenge to get the bike set up and competitive, and you spend a lot of time on the left-hand side of the tyre.”

Stoner also hopes that the Mugello Test day that followed the MotoGP round at the Italian track will help. “At the Mugello test we tried to concentrate on the shock that we hadn’t tried since Sepang (Test) this year, and also tried a couple of things with the swing arm, so hopefully at a circuit like this it will have helped to get some more understanding.”

Sitting alongside Stoner was his closest rival in the standings, Yamaha’s Jorge Lorenzo, who with a victory at the last round in Italy gained a huge boost in confidence. “The victory at Mugello gave us more confidence and now we are more focused on trying to win races, before we were playing a little bit – fighting for the podium,” said the defending World Champion. “Now we know there is a big possibility to fight for the win in the next races.”

I’ve never won here so it would be a good change to finally win here.

Lorenzo, yet to win in any class at Sachsenring, continued: “I’ve never won here so it would be a good change to finally win here. We know it will be tough though – I’m very excited to get out on the bike. I like this track, it changes a lot through the different sectors and is very tricky.”

Valentino Rossi continues to search for the ideal set-up on the Ducati, and the Italian, who made his comeback from injury here last season, said: “Last year was very emotional to come back and ride after the crash, and I have very good memories because I was fast and had a great battle. We have to try the same this year. This isn’t a good moment for us, we have to work to be closer to the top guys. Sachsenring is strange, very tricky but I like it, I’ve had some good races here in the past.”

“Unfortunately in the last two races we have had to fight the weather, especially in Assen but also in Mugello where we couldn’t work enough on the bike because of the bad conditions. It looks like we fixed some problems but we have others, so we’re on the way and we need to try and fix them all together to improve the performance,” he added. 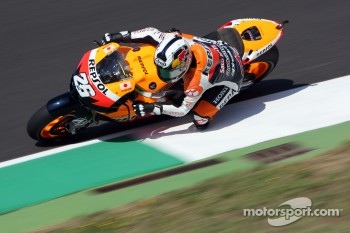 Dani Pedrosa (Repsol Honda) continues his progress on to full fitness this weekend having made his return to action in Italy, saying: “I’ve had two more weeks of rest so of course I’m feeling better. I don’t feel as good as I did before I crashed, but day by day I’m improving and I’m improving my strength and fitness.”

Pedrosa, who was the winner at Sachsenring last year, continued: “This is a track that in the past I’ve had good races at. Last year’s race was really good even though we had to stop and re-start. I’m looking forward to this weekend, maybe on Sunday it’ll rain, but we hope we can have a good race and just try to get a rhythm. The track is left-handed which will help my shoulder, that’s a positive, but if the weather is changing we’ll have less time to set the bike up for Sunday.”

Making his return from injury after missing the last two races after crashing at Assen, Loris Capirossi (Pramac Racing) said: “My condition is getting better day by day but we are still only 20 days after the injury in Assen. The ribs are getting a bit better but aren’t perfect, the collarbone is still painful and I want to use the free practice tomorrow morning to check my fitness.”

“Watching a race from home is very difficult and that’s why I’m here, I can check my potential and condition and I believe I can ride the bike this weekend,” he concluded.