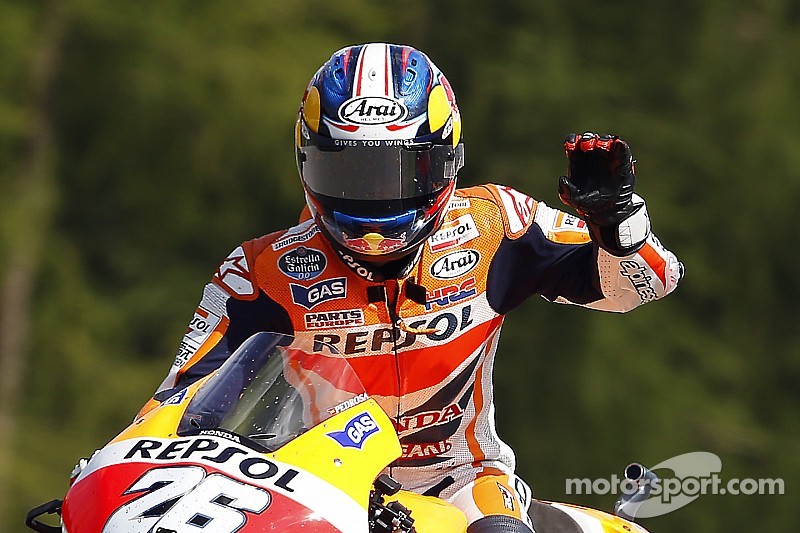 The script was well an truly ripped up during round 11 of this year’s MotoGP World Championship with Dani Pedrosa sealing a superb victory at the bwin Grand Prix České Republiky in a thrilling race at the Automotodrom Brno and in turn ending his teammate Marc Marquez’s season long winning streak with Movistar Yamaha teammates Jorge Lorenzo in second and Valentino Rossi adding another podium finish to his season tally.

Lorenzo and Pedrosa took the initiative early on to push at the front with Pramac Racing’s Andrea Iannone leading the way for a short period before Lorenzo pushed past and Pedrosa following. Marc Marquez didn’t get the start he wanted from pole position and it was to set up a race where the reigning world champion and current points leader wouldn’t find the pace to stay with the front runners.

I am very happy to have won this race! Bringing home the win for the team feels fantastic.

Rossi also got off the great start and positioned himself at the front behind his teammate and Pedrosa while Marquez was hassling the seven-times MotoGP world champion for third. Iannone and Marquez had a near miss early on with the two riders colliding during their battle for 4th position but Iannone then fell off the pace with Ducati Team rider Andrea Dovizioso then challenging from behind. While Dovizioso was battling with Iannone, his teammate Cal Crutchlow had to enter the pits with his machine before re-joining only for the British rider to retire later on in the race.

Pedrosa had made the move to the front within just a few laps after stalking Lorenzo who had pushed hard at the start to take the lead. Pedrosa would not relinquish the lead for the rest of the race with Lorenzo in a similar position. There was two other crashes early on in the race with Pol Espargaro (Monster Yamaha Tech 3) and Michael Laverty (Paul Bird Motorsport) both ending their race early in separate incidents.

The gap between the top four riders stabilized somewhat in the middle of the race with Marquez unable to catch Lorenzo who was also losing miniscule amounts of time to Pedrosa as the race progressed. Rossi then began to push to catch Marquez who looked to be experience unusual grip problems on his RC213V. Rossi finally made the move on Marquez entering the final ten laps and Marquez was unable to respond.

The final laps of the race Pedrosa had a comfortable lead over Lorenzo who didn’t stop pushing all race to catch his countryman while Rossi was able to stay ahead of Marquez to take the final podium position. The battle for 5th saw Dovizioso and Iannone have a great battle and in the end it was Iannone who grabbed the position. Finishing the race in 7th was LCR Honda’s Stefan Bradl who was being chased down by NGM Forward Racing’s Aleix Espargaro who finished ahead of Monster Yamaha Tech 3’s Bradley Smith and the final place in the top ten being secured by GO&Fun Honda Gresini rider Alvaro Bautista.

Pedrosa dedicates win to his crew

Pedrosa was delighted with his victory and praised his pit crew for their hard work and determination. He said, "I am very happy to have won this race! This year it has been a tough road to victory, but today everybody in the team is very happy. Seeing their smiling faces makes me happy as well, because you always try to get the best results but don't always manage to do so. This year we have an amazing rival in Marc, who has had great performances at every round so far. Maybe today wasn't his best day, but I think that we also worked very well this weekend; bringing home the win for the team feels fantastic.”

Lorenzo was very happy to finish ahead of Marquez but said he needed to be more aggressive early on. “Finally we beat Marc,” said Lorenzo who continued, “But unfortunately it was not me who got the victory this time. I had a chance to get the win because I was feeling good during the warm up and also on the first laps of the race. The only problem was that the feeling of the bike changed after a few laps and Dani caught me. I need to be more aggressive, because he managed to get away. The bike was not so bad at the end of race but I was on the limit to catch him. If there would have been one more lap I would have been able to try and beat him, but it was too late.

I wanted to try and fight for the win, but Dani rode a really good race. It was a good opportunity for us to win because Marc was not fit enough, but we didn’t plan the race perfectly so we have to learn from this experience in the future. I’m very happy with Yamaha’s work and how they have improved the bike these last few races. I think it will also be a big improvement for other tracks. I also feel very strong physically so if it goes well we can fight for the victory,” The two-time MotoGP champion added.

I’m very happy about this result, because it was a difficult weekend. Yesterday I crashed and injured my finger. This morning it was very bad when checking the setting also with pain making it difficult to ride. This afternoon I visited the Clinica Mobile for my finger to prepare it for the race. With Silvano (Galbusera) and the whole team we were able to set up the bike and we were able to have a good race. I’m happy.

We had a good pace and got another podium. Unfortunately I lost a bit of time on the first laps because I wasn’t sure, but after I found the rhythm and then it was a great pleasure to beat Marc. He was sliding and had a problem so he wasn’t fast enough. Of course we tried to arrive more in front but the third place was not so bad in Brno because Dani and Jorge rode a very strong race,” Rossi added.

Second and third row for Yamaha in Brno qualifying