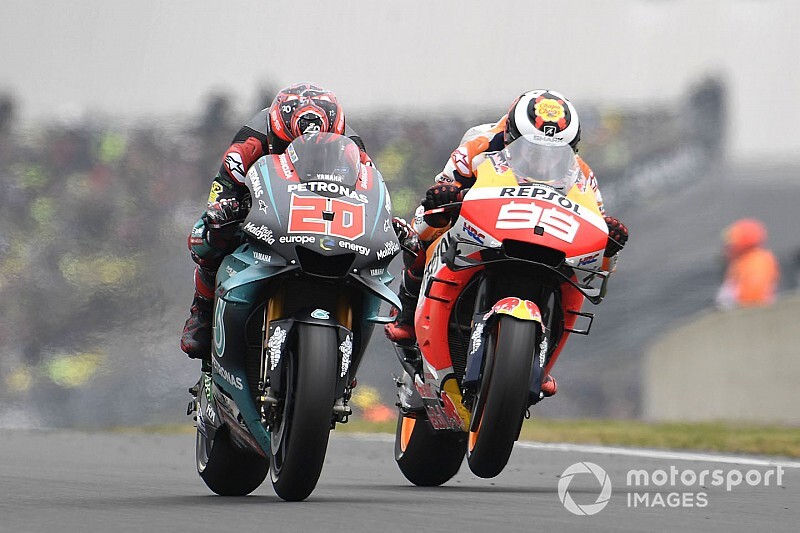 MotoGP rookie sensation Fabio Quartararo revealed that he turned his bike into qualifying mode during the French Grand Prix, without worrying about whether his tyres would last.

Despite starting the weekend as one of the fastest riders, Quartararo only qualified 10th and ran as low as 17th after making an error while trying to pass Maverick Vinales.

Quartararo then showed lightning-fast pace in the second half of the race and recovered to eighth, just 1.3s behind teammate Franco Morbidelli.

The Frenchman revealed that he decided to just switch to "time attack mapping", and go all-in.

"Today I do something that I normally shouldn't do, I put the time attack mapping during the race," he said. "I say okay, let's see what happens - and if I destroy the tyre, will be my problem.

"When I overtake [Alex] Rins [on lap 15], I put the time attack mode and then I push a lot into the limit.

"It was not a big difference, was small changes, maybe acceleration the bike was spinning a little bit more but I can control a little bit on the riding style.

"Physically was really tough to ride and lucky that the race finished."

Quartararo said that before the race top eight was the goal, which he achieved, but didn't want to think about what else could have been possible given his pace in the race.

"I don't know, I don't want to think about it because for sure will be a better result. I think the top five," he said.

"For me, the goal was same as before, top eight was the goal but of course with this pace, I want more.

He added that he still learnt a lot during the race, including being able to ride fast with a style that is less stressful on the tyres.

"The biggest thing I learn, how to save the tyre and I think I found something.

"In the beginning of the year I was finding laptime in acceleration pushing like hell and the bike was sliding a lot, now I am doing the laptime in a different way.

"Not really on the acceleration but more in corner speed, braking.

"Now this is what I learn during the race and it is only our fifth race, I hope to learn every time when things are like this, but really happy about what we did this GP."