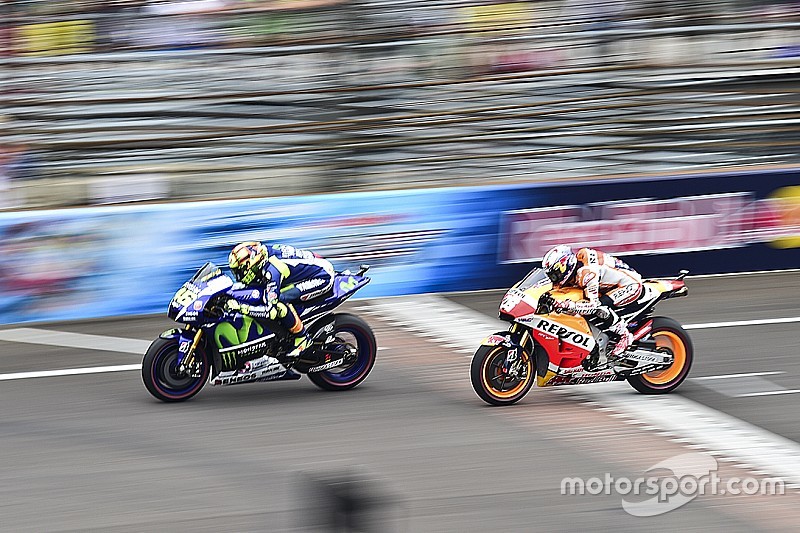 MotoGP points leader Valentino Rossi was delighted to limit the damage to his advantage in the Indianapolis Grand Prix, his podium finish meaning he takes a nine-point lead to Brno this weekend.

Rossi’s lead was trimmed by four points by teammate Jorge Lorenzo to nine, but it could have been by 12 if the Yamaha legend hadn’t passed Honda's Dani Pedrosa for third, and Marc Marquez hadn’t overtaken Lorenzo for the win.

“Dani overtook me one lap before the end, so I gave everything to make another pass to stay in front,” said Rossi.

“I also knew that if I was behind [on the finishing straight] then I am not able to overtake him before the line. So I knew I had to push.

“I’m happy, it’s important. Another podium, and three points more for me for the championship, is fantastic – it’s crucial.

“I lose just four points to Jorge, but all of the weekend he was stronger. We know this race is difficult for us, so we had to defend a bit, so this is a good result.”

Rossi believes the sweeping corners and high-speed chicanes of Brno will suit his Yamaha more than Indianapolis’s infield road course.

“It’s a track that I love, I scored my first victory there… in, er, 1575 I think!” quipped the veteran, who scored his 170th podium at motorbike racing’s top level at Indy.

“Last year was not so bad, but I crashed and got injured. So we have to try the maximum after taking two or three days to recharge the batteries. This championship will be very hard – fighting until the last race."

Lorenzo was also happy with his day’s work, even if he was passed by Marquez for the win three laps from home.

“For the championship, it’s very good,” he said. “Unfortunately, Valentino finished third, when he had been fourth fighting with Dani, so it was only four points [gained] – but that’s better than losing, no?

“The important thing is to be consistent, to win when you can and to finish second or third when it’s not your time.”