Next in our countdown of the top motorsport stories of 2018, we look back at a crazy Argentina MotoGP race, where Valentino Rossi and Marc Marquez's famous feud was reignited in spectacular style.

MotoGP is, without a doubt, among the most entertaining motorsport series of all these days, with thrilling races occurring perhaps more consistently than anywhere else.

But by far the most chaotic and dramatic race of the season came in just the second round, at Argentina's Termas de Rio Hondo track, where MotoGP’s two biggest stars collided in scenes reminiscent of their famous 2015 feud.

But more on that later. Let’s start at the beginning.

Prior to the race itself, Jack Miller stole the show. On Saturday, he scored his maiden MotoGP pole position in trademark Miller style, by being the first and only rider to gamble on slicks on a drying track surface.

Conditions were similar before the race – it wasn’t raining, but the track was clearly wet as the riders made their way to the grid from the pits. Wet tyres seemed to be the order of the day.

However, it was drying up at such a rapid rate that, within minutes, more and more riders realised they would be better off on slicks. Shortly before the formation lap should have begun, everybody hastily left the grid and pulled into the pits to change tyres. Everybody, that is, except Miller, who was again the only one to correctly gamble on slicks.

Confusion ensued, and the race was delayed as there was just a single bike on the grid - the other 23 were in the pits.

The remaining riders besides Miller were ultimately allowed to start from the grid. But in order to compensate for Miller’s lost advantage, everybody else was given a six-row grid penalty, leaving Miller's Pramac Ducati alone at the front.

The race was finally set to get underway with that very odd-looking grid, only for Marquez to stall his Honda.

Having some room ahead of him, he pushed his bike forward and eventually fired the bike back up, manoeuvring his way between other bikes back to his grid position in surreal fashion. 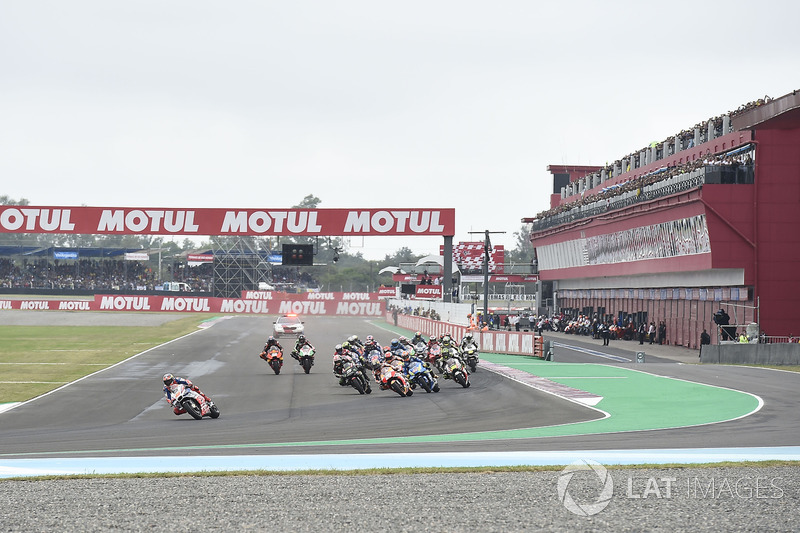 Having seemingly gotten away with that, Marquez carved his way through the field and took the lead from Miller, whose grid advantage was not nearly as big as he deserved, on Lap 2.

But in reality, Marquez should have been forced to start from pitlane after stalling his bike as per the regulations, and he was soon hit with a ride-through penalty.

With Marquez out of the picture, the fight for the win turned into a four-way affair between Miller, Cal Crutchlow, Johann Zarco and Alex Rins with no factory Hondas, Ducatis or Yamahas in sight.

Despite dropping down to 19th after his penalty, Marquez's dominant speed in the still-damp conditions was made apparent by the way he gained places lap-by-lap. Having barged his way past Aleix Espargaro's Aprilia during his inexorable rise up the order, Marquez climbed to seventh behind Rossi.

Marquez was clearly a lot faster than his old rival, and he was in no mood for wasting time behind Rossi, so he pounced at the first hint of an opportunity, diving down the inside at Turn 13. But the move was way too aggressive and the pair inevitably made contact – they just about stayed on their bikes, but both went wide.

While Marquez was just barely able to stay on the asphalt, Rossi’s front tyre nicked the wet grass and he instantly fell.

Marquez - who was handed a 30-second penalty for his reckless manoeuvre, dropping him out of the points - and Honda team boss Alberto Puig went to the Yamaha garage straight after the race to apologise, but they were very publicly batted away by Rossi’s right-hand man Uccio Salucci.

Rossi fumed in front of the media and also in front of the world, with MotoGP.com deciding to live stream the Italian’s scrum, saying that Marquez had "destroyed our sport”, and that he didn’t feel safe riding near the Spaniard.

Marquez, a champion in 125cc, Moto2 and four times in MotoGP at the time, was made to look like a reckless, out of control rider. But, ultimately, the conflict didn’t have a lasting effect, as he regrouped to win the next three races in a row and ultimately ran away with the title.

The start chaos however soon prompted rule changes by MotoGP to make sure such a farce doesn’t happen again.

Oh, and the Argentine Grand Prix was won by Crutchlow, and a British rider was leading the championship for the first time since 1979 - something that was a mere footnote compared to the drama going on down the order.

Webber: I almost joined Ferrari in 2013

Webber: I almost joined Ferrari in 2013