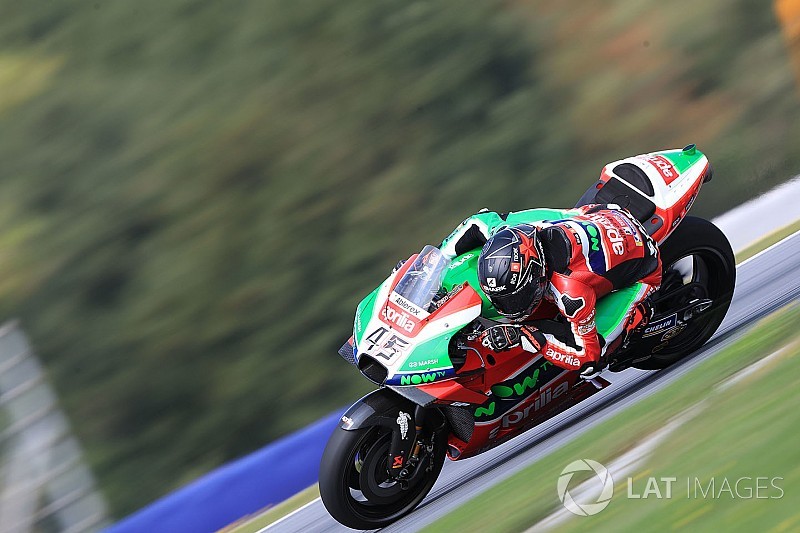 Redding starred when the weather took a turn for the worse during the Red Bull Ring weekend, setting the second-quickest time in a rain-soaked Friday afternoon practice and ending up third in similar conditions on Saturday morning.

However, qualifying and the race both took place in dry conditions, with Redding managing only 20th on the grid and the same position in the race, 22 seconds down on teammate Aleix Espargaro.

The Briton said his strong performance in the wet made his struggles in the dry that much harder to accept.

“It's been a f***ing horrible weekend,” said Redding post-race. “When the conditions bring the machines closer [together], I can see my potential. I can be fast. It just reminded me of how good I actually can be.

“I just accepted it this year, I never had a wet session. But then, this weekend was like ‘yeah, you can mix with the best guys in the world when the level comes a bit lower with the machinery’.

“To be honest, to have a race like that is heartbreaking, because I try all the time and it just doesn't get easier. There’s always a problem, with something, every weekend.

“I've tried to accept it and tried to just deal with it, but honestly, it is a bit of a disaster at the moment, and I'm not happy. This weekend was a reality check for me. Riding around there [in that position] hurts.”

He added: “I have to go now to Silverstone, the next race, I need to smile in front of everyone and say I'm gonna do a good performance, and it’s all bulls*** because you can't do anything.

“You cannot make a piece of s*** shine. I know it sounds harsh and I shouldn't say it, but that is what it is. You're trying to make something average be better.”

Asked if his problems were related to the fact he is leaving Aprilia after this season, Redding replied: “No, it's nothing to do with that. The guys are trying but it is just a bit of a joke.

“There are so many things that I'm not even allowed to say that in a team of this level should not be happening, and it is happening. And I accept it.

“But I come here, I can be fast here, I make good results in the past, I like the track, it suits my style, I thought I come here, I've got a good chance of making it a good enough result for us. And it was hell from the beginning.

“Then we find out yesterday night there was a problem with the sensor, this, this and this, the suspension is reading different than what it is doing, f***ing hell.

“This is a MotoGP full factory team, why is this happening?

“I've got problems with the electronics all the weekend, cannot get it to work. So what hope do I have to make a result here? I can't, and that is the thing that's making it hard at the moment.”

Espargaro: "Impossible" to stay in points

Espargaro ran as high as eighth in the early laps before he started to haemorrhage places in the second half of the race, sliding out of the points and finishing 17th.

“We lost a lot in acceleration, maximum lean, [it was] difficult to stop the bike so the first part [of the race] I was very aggressive on the brakes, very focused on the limit,” explained the Spanish rider.

“I was very fast in the beginning, very competitive, but as soon as the tyres dropped it was impossible, I lost a lot in acceleration. I tried everything but was impossible to finish in the points.”

Nieto MotoGP team steps down to Moto2 for 2019