Bradley Smith was satisfied with how the KTM RC16 worked during the first day of MotoGP post-season testing at Valencia, which saw him ride for the Austrian team for the first time.

Smith, who last weekend completed his fourth season in MotoGP and ended a six-year relationship with Tech 3, ended the test day in 20th.

The 25-year-old praised the RC16 bike, which made its race debut in the hands of Mika Kallio on Sunday, for working in a consistent, "logical" way.

"Very positively surprised by how well everything feels, there are so many things different," said Smith.

"One thing that I like is that the bike is super-consistent, doesn't do anything out of the ordinary, does the same things every lap - if there is a wobble, it's a wobble there all the time.

"It's not like when sometimes you know you get on one bike and you change it and it changes something of a completely other direction."

Steel chassis not an issue

Despite several elements of the KTM bike being unconventional, including the tubular steel chassis, Smith said it didn't require too much adapting.

"The engine is completely different, chassis being steel, WP [suspension manufacturer] but yet the feeling is there, it feels like a bike," he added.

"For me there is quite a direct feedback [from the steel chassis], which is something I quite like.

"It has a similar character in terms of like it is on the Michelins, the feedback is there, you understand it, reacts to normal changes, it's logical.

"So it means that we can work clearly thoroughly and to be 1.8s off and sit there going 'we can improve that, that and that' it's quite a nice situation."

"Pol and I went in a similar direction"

Similarly to Smith, his 2016 teammate Pol Espargaro also joined KTM - and the Briton said the two of them giving similar feedback was another positive aspect of the day.

"Pol seems to be working on the same things, complaining about the same things, so that's good that we're working in parallel and our laptimes seem to be quite similar," said Smith "All of that is a positive in my eyes.

"I think mine and Pol's riding styles over the last four years is quite different to Mika [Kallio]'s so we've gone more in the direction of trying to roll through corners rather than stop and go, a bit like in Moto2.

"I think that Mika doesn't mind the bike backing in as much, sliding into the apex because that's what he knows.

"It's a good thing me and Pol went in a similar direction and had a positive feedback from it." 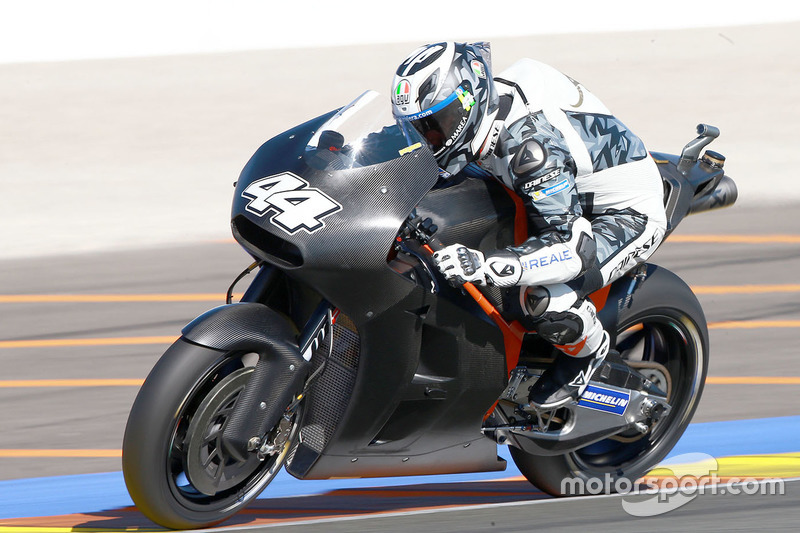 Lorenzo had a "big smile" after first Ducati laps - Ciabatti

How an Australian superstar bowed out in style

How an Australian superstar bowed out in style