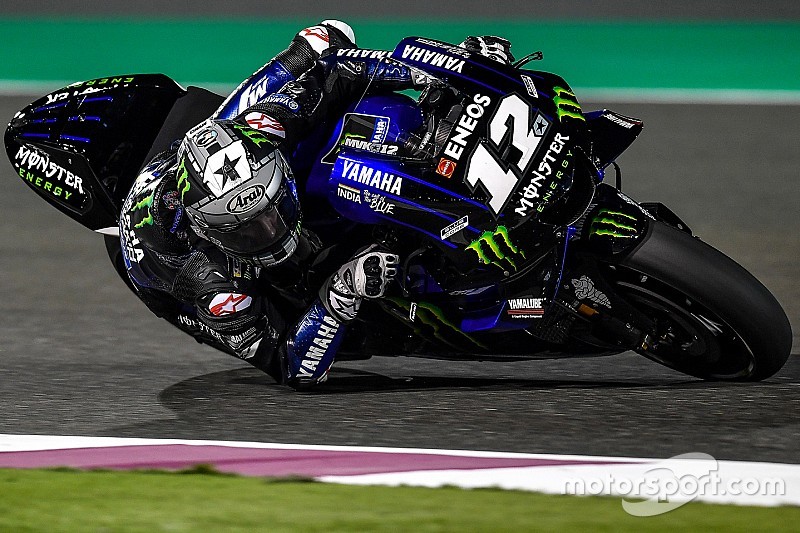 Yamaha rider Maverick Vinales kicked off the final pre-season MotoGP test in Qatar on top as Marc Marquez suffered his first crash since his shoulder operation.

Reigning champion Marquez's fall occurred at Turn 16, but his crash was a relatively small one, as he was able to return to the pits and ride again later on.

The Honda man led for a short while in the early stages of the six-hour test but soon fell down the order, and was only 10th in the end.

Ducati factory duo Andrea Dovizioso and Danilo Petrucci spent the most time at the head of the order, the pair only briefly demoted by Vinales and Suzuki's Alex Rins before the final hour of the test began.

Vinales then beat Dovizioso's best time by nearly half a second with an hour left on the clock, with Rins also following suit to move into second.

The Yamaha rider's 1m55.051s remained the benchmark time as the test concluded, 0.108s ahead of Rins.

A further three tenths back, Dovizioso and Petrucci settled for third and fourth, separated by half a tenth, with Valentino Rossi completing the top five on the second Yamaha.

Takaaki Nakagami led an otherwise underwhelming day for Honda in eighth as Marquez, Cal Crutchlow and Jorge Lorenzo, all still recovering from injuries, were 10th, 18th and 21st respectively.

Having missed the previous Sepang test due to a training accident, Lorenzo was 2.039s off the pace on his first test outing of the year, and nine tenths slower than teammate Marquez.

Lorenzo "very far" from being comfortable on Honda