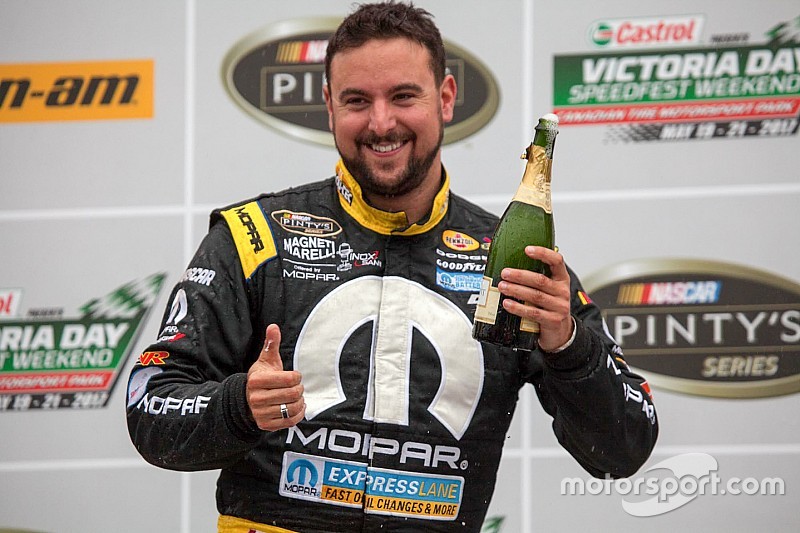 Each week Motorsport.com will feature a driver, crew member or car owner from NASCAR's only sanctioned touring series in Canada.

How long have you been racing and what was the first race you competed in and what kind of car did you drive?

How long have you been competing in the NASCAR Pinty's Series?

I’ve been a part of this series since its inception in 2007 when NASCAR began sanctioning the series.

What made you decide to compete in the NPS?

My dad raced dirt modifieds and I've always liked NASCAR cars and racing at Daytona International Speedway. My sponsor at the time wanted to go NASCAR racing so we did and have been here ever since.

What makes being a part of the NPS special to you?

I’ve raced in all the NASCAR national series (Trucks, Xfinity and Cup) and what I like about the NASCAR Pinty’s Series is we race all across Canada and its great competition with a lot of fans. I love the fact that we race close to home. I love being sponsored by Chrysler Canada and they’re a great sponsor. It’s never easy racing against all these great drivers, but being close to home and in Canada with all of my family and friends makes this series a lot of fun.

How have your fans responded to you being a part of NASCAR in Canada?

What or where is your favorite track on the schedule?

I love the road courses like Canadian Tire Motorsport Park, Trois-Rivières and the street course in Toronto, but Trois-Rivières is my first love. I’ve never finished outside the top three there in any NPS race.

Do you have any hobbies outside of racing?

I test and drive a lot of snowmobiles off road in the winter and that is a passion of mine. I really enjoy driving them in the snow.

If you weren't a race car driver, what do you think you would do instead of racing for a career?

That’s a good question. Maybe work with my father’s business. I can’t imagine myself doing anything else but racing.

Who has been the biggest influence in your life and/or racing career?

My dad Robert Ranger and a lot of my super bike friends. My dad raced and I grew up in the sport watching him race dirt modifieds when I was a kid.

Tell me something about you that would surprise your fans?

Before the race I always eat a chicken sandwich and chips. And I always wear my white boxers that I’ve had since 2003. I clean them (laughing) but I still wear those boxers in every race.

Getting to know Alex Labbé: "All I ever wanted to do was race"